Zionist Ideology is the Struggle of Our Generation 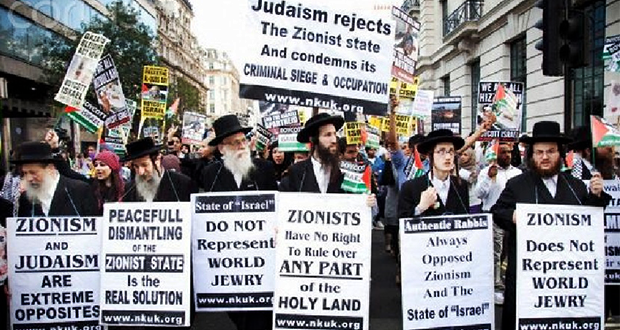 As many of you will have seen from recent events, there has been a real aggressive push from the Zionist lobby in aiming to shut down debate of Israel once and for all by seeking to equate anti-Zionism with ant-Semitism. Allegations such as ‘when someone attacks Zionism they are indirectly attacking Jews because the two go hand in hand’ are dangerous and make a mockery out of the serious issue of anti-Semitism which must be strongly opposed like any other form of racism.

Zionism is a political project which has the support of many Jews as well some evangelical Christians. It has to be recognised as a political project and therefore must be open to criticism and opposition by all. It cannot be regarded as beyond reproach. There are, of course, Jews who subscribe to Zionism, and as such, our opposition to such individuals would be on the premise of their Zionist ideology, not because of the fact that they are a Jew.

In order to defeat Zionism, we must begin by understanding the threat we face and why we face it and understand exactly what it represents. It is an ideology and an extreme doctrine and, like any extreme doctrine, it is subversive. But, at the heart of the ideology is its racism.

Zionism is a Racist Ideology

A watershed moment in the struggle against Zionism came in 1965 when the United Nations (UN), supported by the United States and Israel, passed Resolution 2106 defining racial discrimination as “any distinction, exclusion, restriction, or preference based on race, colour, descent or national or ethnic origin.” Ten  years  later,  on  November  10,  1975,  the  United  Nations  applied  this  definition  to Zionism [Resolution 3379] condemning and concluding that Zionism is:

“A form of racism and racial discrimination.”[1]

This resolution was passed by 72 countries, representing 52% of the Earth’s population. 35 countries voted against the Resolution and 32 abstained.

Some of the reasons why the UN decided to pass the resolution was as follows:

(1) Theodor Herzl, the founder of Zionism, notes in his diary that the removal of Arabs bodily from Palestine, is part of the Zionist plan to “spirit the penniless population across the frontier by denying it employment … Both the process of expropriation and the removal of the poor must be carried out discreetly and circumspectly.”[2].

(2) Dr. Chaim Weizmann, the first president of Israel, is reported by British Foreign Minister Lord Curzon to want “a Jewish State, a Jewish nation, a subordinate population of Arabs etc. ruled by Jews; the Jews in possession of the fat of the land, and directing the administration.”[3]

(3) Joseph Weitz, director of the Jewish National Fund, the Zionist agency charged with acquiring Palestinian land, insists, “The only solution is Eretz Israel [Greater Israel], or at least Western Eretz Israel [all land west of the Jordan River], without Arabs. There is no room for compromise on this point… We must not leave a single village, not a single tribe.”[4]

In addition, the UN would have had regard to Israel’s enacting of the Law of Return, granting all Jews anywhere in the world, and only Jews, the right to immigrate to Israel and granting only Jews, the status both of Israeli citizenship and Jewish nationality. This distinction between citizenship and nationality, unique to the Zionist state, becomes the legal basis for state sanctioned discrimination, whereby only Jewish nationals are eligible for many of the privileges and services provided by the state or by its semi-governmental Zionist organisations. They would also have had to approve many other discriminatory laws as well as the building of endless settlements.

The UN had, in actual fact, developed on earlier motions passed. The General Assembly condemned, inter-alia the “unholy alliance between South African racism and Zionism” by passing Resolution 3151 on 14 December 1973.[6] In addition, there existed Resolution 77 which was adopted by the Assembly of Heads of State and Government of the Organization of African Unity held in Kampala from 28 July to 1 August 1975. It that:

“the racist regime in occupied Palestine and racist regimes in Zimbabwe and South Africa have a common imperialist origin, forming a whole and having the same racist structure and being organically linked in their policy aimed at repression of the dignity and integrity of the human being.”[7]

It is not surprising that the US used its influence in the UN to repeal the condemnation of Zionism as set out in Resolution 3379 and thereby rewriting history in 1991. Despite the repeal, the effect of Zionism, of course, remains racist.

Zionists argue that comparing Nazism with Zionism is anti-Semitic. Yet, you will find that the foremost amongst those who have made this link over the years have been anti-Zionists members from the Jewish community. Albert Einstein, Hannah Arendt and other prominent Jewish Americans, writing in The New York Times, protested the visit to America of Zionist Menachem Begin:

“Among the most disturbing political phenomena of our time is the emergence in the newly created state of Israel of the Freedom Party (Herut), a political party closely akin in its organisation, methods, political philosophy, and social appeal to the Nazi and Fascist parties.” [Begin later became Prime Minister as did Herut member, Yitzhak Shamir.][8]

Will today’s Zionists call Einstein, Nobel Prize winner and discoverer of the special and general theory of relativity, an anti-Semite?

What will they also make of the statement from the famous Jewish philosopher and former Zionist, Martin Buber who later recanted the ideology and said:

“When we returned to Palestine … the majority of people preferred to learn from Hitler rather than from us [Jews].”[9]

Are they also going to call Martin Buber an anti-Semite?

In addition, whilst commenting on the Israeli military’s Emergency Regulations which involved settling on Palestinian land, subjecting Palestinians to arbitrary arrest and imprisonment, deportation and collective punishment, Dr. Israel Shahak, Chairperson of the Israeli League for Human and Civil Rights and a survivor of the Bergen-Belsen concentration camp, observed in 1983:

“[Zionism is a] regime based on structural discrimination and racism… Hitler’s legal power was based upon the `Enabling Act’, which was passed quite legally by the Reichstag and which allowed the Fuehrer and his representatives, in plain language, to do what they wanted, or in legal language, to issue regulations having the force of law. Exactly the same type of act was passed by the Knesset [Israel’s Parliament] immediately after the 1967 conquest granting the Israeli governor and his representatives the powers of Hitler, which they use in a Hitlerian manner.”[10]

Similarly, Rabbi Irving Reichert of the American Council for Judaism in a 1936 sermon in San Francisco, stated:

“There is too dangerous a parallel between the insistence of some Zionist spokesmen upon nationality and race and blood, and similar pronouncements by Fasicst leaders in European dictatorships”.[11]

Zionism should never be confused with Judaism. It is clear from the above that this is something that many Jews have been protesting against right from its inception up until today. Few people deserve to be honoured for courage and resourcefulness in the service of justice as Rabbi Berger does. For over 40 years he spoke out and wrote eloquently against the two headed perniciousness of Zionism—the violence it has done to the Palestinians and the damage it has inflicted on Judaism. He was a founder of the anti-Zionist American Council for Judaism and later American Jewish Alternatives to Zionism. In an era so lacking in heroes, Rabbi Berger is an inspiration who developed a religious philosophy of integration and not nationalism. In 1943, Rabbi Berger stated:

“I oppose Zionism because I deny that Jews are a nation. We were a nation for perhaps two hundred years in a history of four thousand years. Before that we were a group of warring Semitic tribes whose only tenuous bond of unity was a national deity—a religious unity… Certainly since the Dispersion we have not been a nation. We have belonged to every nation of the world. Jewish nationalism is a fabrication woven from the thinnest kind of threads and strengthened only in those eras of human history in which reaction has been dominant and anti-Semites in full cry”.[12]

Zionism is a racism ideology, as was declared by many nations of the world as discussed above. Zionism is an ideology that shares many traits similar to that of Nazism and Fascism as stated by a number of commentators from the Jewish community as mentioned above. By overseeing the systematic killing of the Palestinian people, using chemical weaponry during conflict and then denying these facts, it can be argued that this is akin to anti-Semites who irrationally deny the Holocaust took place.

Israel is a secular, Zionist state and yet one of the greatest crimes it has committed is to refer to itself as the ‘Jewish State’ in an effort to give itself legitimacy in the eyes of the world and linking it to the Jewish faith. They openly defied Rabbinical authority and appointed themselves as leaders of the Jewish “nation” whilst having no religious education.

Zionists also attack those who refuse to recognise Israel and yet there is nothing anti-Semitic to oppose recognising a Zionist, occupying, racist State. In fact, there are a number of Haredi Jewish groups which not only oppose Zionism, but also do not recognise the State of Israel. Among them are the Hasidic sects of Shomer Emunim (and its offshoots, Toldos Aharon and Toldos Avrohom Yitzchok), Mishkenos HoRoim and Dushinsky. Are these religious Jews to be considered anti-Semites?

In conclusion, we must continue to stand up for justice and in solidarity with the work that was begun by brave Jews who opposed Zionism right from its very inception and expose the ideology for what it is. I leave you with a quote from Dr. Israel Shahak, a Holocaust survivor, which encapsulates what Zionism is and its dangers:

“[Zionism] can be described as a mirror image of anti-Semitism, since it, like the anti-Semites, holds that Jews are everywhere aliens who would best be isolated from the rest of the world”.[13]