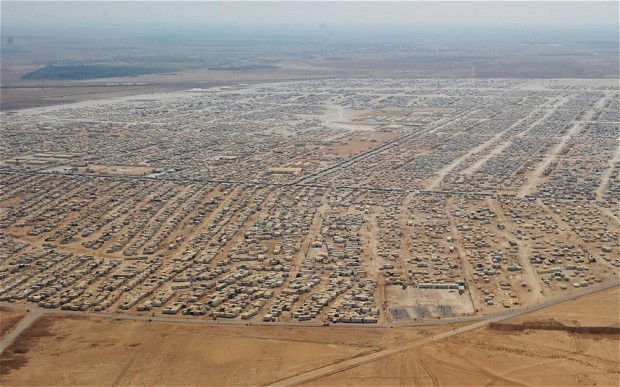 As a result of the influx of Syrian refugees into Jordan, many Jordanians are coming to realise that their businesses are improving. Many Syrians are happy to receive lower wages than their Jordanian counterparts, extended shop opening hours have generated more sales, and even customer service standards have also increased. The Syrian approach to customers is more considerate as oppose to the unyielding attitude adopted by locals who believe that they are doing customers a favour by selling them goods. Business owners want to maximise their profits and Syrian manpower caters for this. At the same time, monthly wages enable Syrians to plan their futures. When their children start school their parents may choose to settle in Jordan. Syrians are notorious for their conservative consumption and spending habits. This is evident in Syria’s self-sufficiency before the outbreak of the civil war, particularly in food, agriculture and livestock. Not only will Syrians soon become business owners but they will also endeavour to employ more fellow Syrians.

Jordan as a country has an identity crisis. Palestinians, Iraqis and Syrians are aware and proud of their identity, but due to being a hybrid society, Jordan’s identity as a country has been diluted. Many questions raised regarding Jordan’s identity since its creation were based on the massive influx of Palestinians from occupied Palestine where the country’s population increased extraordinarily in a matter of months. The arrival of many Palestinian refugees in 1967 then almost 700,000 from Kuwait in 1992 was followed by the mass immigration of Iraqis and now Syrians due to their respective crises. Until today, each individual takes pride in his or her own national identity and will continue to do so as long as Jordan fails to be more inclusive instead of introducing alienating policies like ‘Jordanization’ where mainly and perhaps only ‘Jordanians’ are appointed in the army, civil services, police and so on.

As Palestinians form the vast majority of the population in major cities in Jordan, however, the Jordanian parliament is only elected by a handful of Jordanians of Palestinian origin, while other Palestinians are deprived of the right to vote. Palestinians dismiss the legitimacy of such a ‘representative’ government and hence often abstain from voting. There is little sense of belonging beyond an economic one for the wealthier Palestinians. People try to avoid paying taxes because once their money is in the government’s possession, its use for improving people’s welfare is negligible, despite the international community assuming that the money is put in safe hands. The international community represented by international governments, non-governmental organisations, United Nations bodies and Embassies gives money and aid to Jordan but this is hoarded by the Jordanian Government who use it to solely benefit original Jordanian citizens, if anyone. They sustain a huge number of people employed due to nepotism and corruption, who offer very low productivity, paying off some of the country’s huge deficit and they steal the rest, leaving the locals to face the new challenges single-handedly.

By new challenges, what is meant is the high demand for accommodation by Syrians which results in property price increases. The overburden on resource like water, electricity (which is already produced via non-renewable sources) and the waste that municipalities struggle to collect due to lack of funds and resources already scares the locals. This is mainly because the government has failed to provide and the wealth gap between rich and poor Jordanians is ever increasing while some have even been forced to falsify refugee UNHCR documents so that they become eligible for aid.

Islamic organisations have been at the forefront in accommodating and serving communities. This trend peaked after the 1992 earthquake in Egypt when these organisations led social work in all its forms; setting up tents and building mobile hospitals, provoking the Egyptian government to express its anger towards a phenomenon which they described as a ”state within a state,”[1] providing amenities where governments have failed. Similar to Egypt, in Jordan, for many the Brotherhood represents true and honest working people. They build schools, hospitals, educational institutions, religious centres, help single women, widows and give regular and lasting help to needy families and individuals beyond just their Muslim brethren. Their members are often persecuted, imprisoned and lately sentenced with the death penalty in Egypt, while their gatherings are frequently restricted. Nevertheless, for many in Jordan and the Arab world, they are not only considered as strong rivals for the government but also to NGOs that consume money and time to produce reports rather than do effective fieldwork, not to mention the hidden agendas of some NGOs and their misuse of donor money.

Jordan is a country where concerns of discrimination in the labour market are absent. For example, an advertisement for the role of a secretary may request a pretty and presentable young lady around the age of 18-28. Employers find no issue in specifying the nationality of the desired candidate—usually Jordanian. Fortunately the Syrian female workforce has not yet entered the Jordanian market, but without a doubt once they have entered it, they will most definitely work for less. In countries like Jordan, females have great value. With the belief that a female employee is a stranger and vulnerable, the owner of the business or fellow employees may seek some personal benefits besides work. Many Syrian women are married to Jordanian and Palestinian men. This was the case even before the Syrian civil war due to the geographic vicinity of the two regions. Once settled in the country Syrian women learn to bring family members as potential partners for friends and families. If not administered properly, this influx could lead to different kinds of relationships. Sadly, this will increase the already high number of unmarried local Jordanian females since in comparison, a far lower percentage of Syrian men are married to Jordanian women.

There is no doubt that Jordanian resentment of incomers would lessen if Jordan’s finances were more fairly distributed. Moreover, if the government’s policies were more inclusive towards immigrants from other nations there would be a greater sense of Jordanian belonging. In consequence all would contribute to enhance Jordan’s society and prosperity, contrary to the current situation.

Yazan has an MSc in International Development from Bristol University and is an ardent Palestine activist, taking part in many initiatives in support of the Palestinian cause. Yazan has engaged in arranging student exchange programmes between Gaza and the UK and is a keen researcher and academic on the issue, delivered research papers at universities including Oxford surrounding the Palestinian identity problem.

Yazan left the UK just over a year ago to work with a relief agency working with Syrian refugees on the Jordanian border. Through this work, he has come heard many first hand accounts of the Syrian struggle and the suffering of the refugees. He is now a regular contributor for Islam21c alongside the Middle East current affairs team.

Yazan has an MSc in International Development from Bristol University and is an ardent Palestine activist, taking part in many initiatives in support of the Palestinian cause. Yazan has engaged in arranging student exchange programmes between Gaza and the UK and is a keen researcher and academic on the issue, delivered research papers at universities including Oxford surrounding the Palestinian identity problem.

Yazan left the UK just over a year ago to work with a relief agency working with Syrian refugees on the Jordanian border. Through this work, he has come heard many first hand accounts of the Syrian struggle and the suffering of the refugees. He is now a regular contributor for Islam21c alongside the Middle East current affairs team.