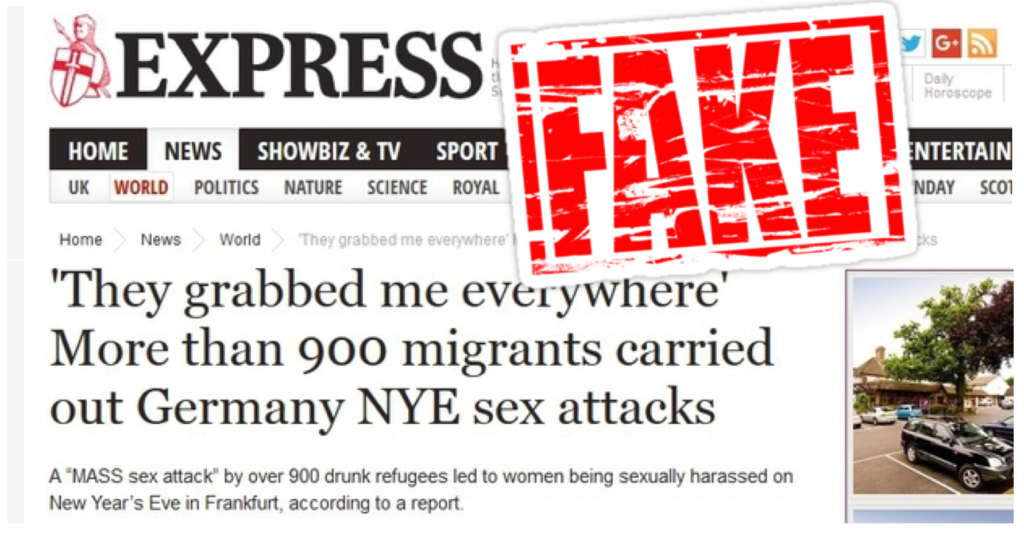 As usual, once much of the damage has already been done by incendiary and sensationalist headlines about refugees’ “mass sexual assaults” in Frankfurt during new year celebrations, German police have this week released the fact that it was probably made up by as few as two individuals, before going viral and adding to the anti-immigrant hysteria throughout Europe and even beyond.

Prosecutors are investigating two people for allegedly fabricating an account of a mass sex attack by Arab migrants in Frankfurt.

Claims that a “sex rioting mob” of around 50 men assaulted a group of women over the new year were reported by German tabloid Bild earlier this month.

The report, which suggested the attackers lived at a refugee shelter in central Hasse, was widely re-circulated by right-wing news sites.

In an article since taken down from its website, Bild interviewed a chef who runs a restaurant in Fressgass, a busy shopping district, as well as a 27-year-old woman.

The chef alleged that dozens of Arab men came into his restaurant in, stole his customers’ jackets and sexually assaulted multiple women.

The 27-year-old female told the paper: “They grabbed me under my skirt, between the legs and on my breast – everywhere.”

“Interviews with alleged witnesses, guests and employees led to major doubts with the version of events that had been presented,” police told German daily Frankfurter Rundschau.

“One of the alleged victims was not even in Frankfurt at the time the allegations are said to have taken place.”

They concluded: “Masses of refugees were not responsible for any sexual assaults in the Fressgass over New Year. The accusations are completely baseless.”

No sexual assaults were reported to police from the the area over New Year before the Bild report, they said.

Investigators were looking into whether the pair had made up the story.

Bild‘s editor-in-chief Julian Reichelt issued an apology on behalf of the tabloid, writing in a tweet: “We apologise for our own work. I’ll shortly announce what Bild will do about it.”