The Fake Fatwa That Went Viral 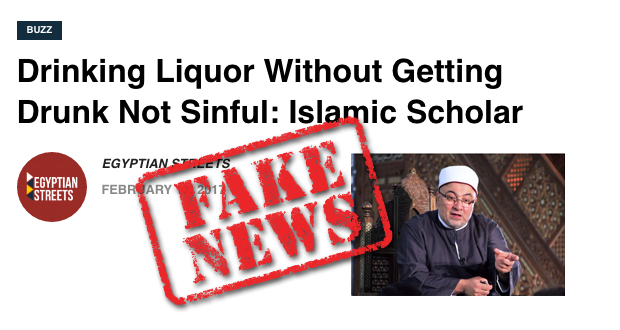 Recently an Egyptian news site published a report quoting an Azhari scholar, Khaled Al Gendy, saying “that drinking liquor without getting drunk is not sinful.”[1]

It was based on a television panel discussion where four scholars—one from each school of law—was discussing the issue of ‘khamr’ from the perspectives of their respective Imāms. 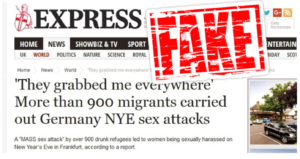 To their credit, the news site posted a link to the 30-minute-long discussion,[2] however upon listening to the actual discussion it is clear that Al Gendy’s words were seriously misunderstood and misrepresented.

Before we correct the misrepresentation, it is pertinent to note that the inaccurate news article has received within two days of posting over 34,000 shares, whist the YouTube video it links to has just over 8,000 views in total. We are reminded of the age-old adage,

“A lie is half way around the world by the time the truth has its boots on;”

and the command from beyond the heavens,

“O you who have believed, if there comes to you a disobedient one with information, investigate, lest you harm a people out of ignorance and become, over what you have done, regretful.”[3]

Countless others have been sharing such “news” and criticising Al Gendy for the words attributed to him. Cynicism aside, whatever the intention of the people who created and spread the false news, it is undoubtable that among the consequences of sensationalist misrepresenting of Muslim scholars is the undermining of the Islamic scholarly community—an aim at the forefront of many powerful “deformist” agendas most notably that of Sisi himself.[4]

This is not to defend any personality but to clarify the truth of the matter. The news site quoted the scholar as saying,

“If the same alcoholic drink was consumed by one person without getting drunk, it is not haram, while being consumed by another person to drunkenness makes it haram [for this person].”

However, it is clear from the actual conversation he was having, that he was talking about what constitutes an impermissible drink in the first place, in the Sharī’a. A more suitable translation of his words would be,

“If a drink cannot intoxicate a person in any [humanly consumable] amount, then that is not haram in the first place (in fact it is not “khamr”). But if that same drink may intoxicate someone else [in a humanly consumable amount], then even a small amount of that drink is impermissible for him.”

He explicitly affirmed the principle, taken from a hadith,[5] that “whatever intoxicates in larger amounts is harām even in small amounts.” He also stated that the drinker is sinful for any effect of intoxication even if it is not complete intoxication.

The panellists also discussed the opinions surrounding intoxicants fermented from other than dates and barley, but these were surrounding whether or not the hadd punishment for drinking khamr would be applied to it. Nowhere did they say, as is claimed, that drinking something that has the ability to intoxicate you in large amounts is permissible in small amounts—as people would have understood from reading the article.