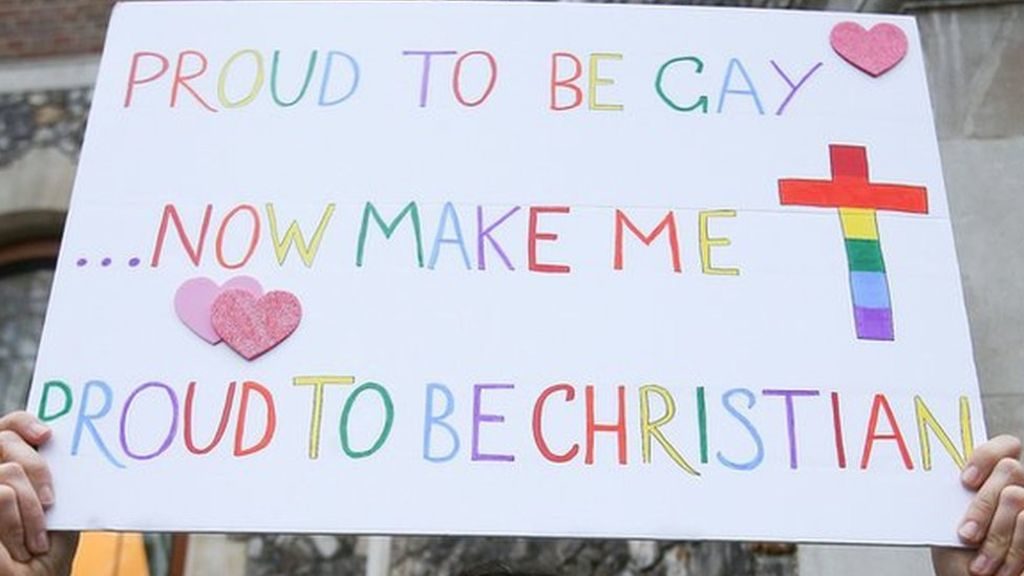 The Church of England has been said to be in “turmoil” after its General Synod (legislative body) debated for hours last night on a “controversial” report produced by Bishops after three years of conversations, costing a reported £300,000.[1][2] The controversy around the report was due to its opening a debate around same sex relationships and its official reinforcing of the status quo of officially ordained marriages being between one man and one woman.

After hours of debate the motion to “take note” of the paper was rejected as it failed to reach a consensus among the three houses, despite getting a majority of votes overall. Although they reinforced the Biblical notion of marriage being between a man and a woman, the result of the meeting has been presented as a victory for LGBT movements seeking to move the Church closer to officially blessing “gay marriages” among the masses and its own ministers.[3]

The report—which was presented as an opportunity to air differing views—was described during the debate as seeking to “straddle two positions” that “cannot be reconciled”;[4] presumably marriage according to Christian tradition based on the Bible and societal pressure to accept homosexual relationships. The issue of same sex “marriage” has long been subject to controversy among the Anglican church—which is said to have 85 million members worldwide.

On the one hand, there are some member churches that have pushed for accepting popular societal and legal reforms on the definition of “marriage”. On the other hand, there are a great many who have tried to resist pressure to essentially change their religious understanding and interpretation as a result of outside pressure and ideology concerning sexual normativity.

Among the quotes and soundbites dissipating throughout the news coverage was a particular statement I found somewhat troubling. It was attributed to the Reverend Bertrand Olivier who identifies as “gay”. Arguing in favour of the church normalising and endorsing same sex relationships, he told the BBC that “the church needed to reflect modern society.”[5]

This is something we hear often in the context of the Muslim community and Islām needing to change to fit the ideology and tastes of Western modernity. However, what is chilling about this statement is the very reason that established western Christianity has possessing somewhat of a bad reputation in the first place in popular culture today.

We obviously believe that the Prophet Jesus Christ (ʿalayhi al-Salām) would never condone the injustice and oppression that the various established Christian churches and empires have committed over the centuries—an abandonment of which has been seen as ‘enlightenment’, ‘progress’ and ‘reformation’ by western society at large. That is because established Christianity was not acting faithfully to the message of the Messiah but was, in fact, “reflecting modern society” wherever it was—“modern” simply meaning “contemporaneity”.

Whether it be femicide and institutionalised hatred of women,[6] racism,[7] the trans-Atlantic slave trade, imperialism, colonialism, an opposition to empirical enquiry, or whatever other unsavoury doctrines and actions of Western Christendom we today see as abhorrent, it is difficult to resist the idea that “the church” of those times was merely reflecting society during those times.

People may comfort themselves today with the thought that today the church and, as a result, the western world, by convenient historical accident happen to have come up with the ‘absolute’ benchmark of what is right and wrong. But is that not what a great many who commit injustice throughout history also thought?

“And if you obey most of those upon the earth, they will mislead you from the way of Allāh . They follow not except assumption, and they are not but falsifying.”[8]

Say, [O Muḥammad], “Shall we [believers] inform you of the greatest losers as to [their] deeds? [They are] those whose effort is lost in worldly life, while they think that they are doing well in work.”[9]

Anyone acquainted with human nature and history, particularly western history, realises that we often have the annoying and arrogant habit of treating our social attitudes and cultural norms as absolute fact claims about nature or reality. Ignoring the distinction and tension between objectively verifiable facts (what is) and values (what ought to be), or as the ancient Greeks presented it, “Physis” and “Nomos”, leads to many committing injustice thinking they are doing good.

In the Christian context, people throughout history referred to their scripture to legitimise cultural or societal norms of the day, as is being argued by some today, which amounts to little more ontologically than their collective whims and desires (which every wisdom tradition is supposed to yield to a higher reasoning) or power, which is the worrying bit. Yesterday, power was explicit threat of violence and coercion, whilst today it is the control (or at least influence) of popular opinion and thinking through more subtle types of epistemic violence, such as shaming and bullying, to coerce others into accepting something.

Muslims should not rejoice

As for Muslims, I do not think we should rejoice over this recent turmoil of the Church of England because it is not occurring in a matter originally determined by cultural norms but in a matter of truth. The debates occurring are essentially on those parts of their scripture and tradition that enjoy a consensus among practically all wisdom traditions, about the nature of the human being and the harmful effects of letting one’s own desires determine what is right and wrong. As Sam Allberry, a pastor who identifies as “same sex-attracted” said in last night’s debate, arguing for the orthodox view of marriage:

“Sexuality is not a matter of identity for me…my primary sense of worth and fulfilment as a human being is not contingent on being romantically or sexually fulfilled, and this is liberating…I used to be bullied at school for being gay…I now feel I am being bullied at Synod for being same sex-attracted and faithful to the teachings of Jesus on marriage. I am grateful the report reaffirms the traditional doctrine of marriage; I am concerned we are already preparing to pastorally undermine it.”[10]

Those Christians that are proposing that their values and morals derived from their scripture need to be moulded to fit “modern society” (rather than the other way around) should think about whether they actually believe their scripture is from their creator in the first place. As Muslims, we cannot blame them for not having true yaqīn (certainty) in their received body of scripture due to their fundamental view of “faith” being “trust without evidence” rather than “warranted propositions” based on clear evidence (burhān, bayyina, dalīl) that Muslims are accustomed to.

When will it be right to be Muslim and gay?

We should be grateful that the Islamic legal tradition gives a just and proportionate legislative weight to cultural and societal norms (‘urf), whilst having a defined legal and interpretive methodology taught by the Prophet himself (sall Allāhu ʿalayhi wa sallam) to determine, broadly speaking, the intent of the Lawgiver. This is very important to remember when people inevitably, as a result of the aforementioned arrogance, force western or Christian notions, arguments and history onto Islām and Muslims.

Those looking for something to fit around their desires will find a way to legitimise their desires or irresistible societal pressure. But those who realise the danger and inherent weakness of the human self (nafs), must never forget the need to tame it and subject it to a higher purpose.

“But as for he who feared the position of his Lord and prevented the soul from [unlawful] inclination, then indeed, Paradise will be [his] refuge.”[11]