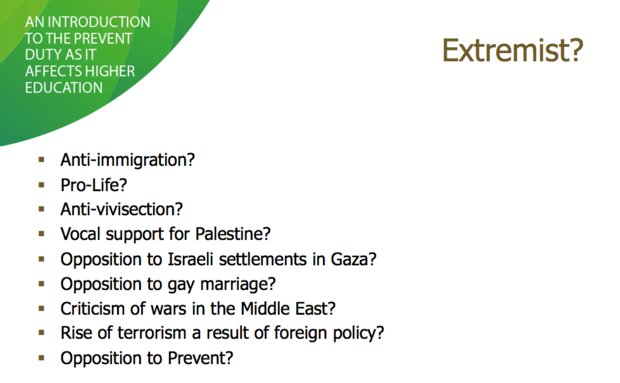 Opposition to Israeli settlements in Gaza.

Criticisms of wars in the Middle East.

These are just some of a list of views that “may be regarded as extremist” according to revised Prevent training material for universities, revealed yesterday by Simon Hooper in the Middle East Eye.[1] The revelation came in the wake of the University of Central Lancashire (UCLan) cancelling an event organised by a Friends of Palestine society.

The event was due to host Middle East Eye contributor Ben White, entitled “Debunking misconceptions on Palestine and the importance of BDS [Boycott, Divestment and Sanctions Movement],” as part of the national Israeli Apartheid Week, where universities across the globe are expected to raise awareness of what some call the world’s last remaining apartheid state.

Although critics of Prevent have long expected the circle of inexpressible opinion (called “extremism”) to eventually grow to include more and more forms of activism,[2] what has surprised some is that the government’s recent redefinition of “anti-Semitism” seems already to have been used to stifle pro-Palestinian rights activists, within just weeks of adoption.[3]

Also read: Summary of Our Legal Case Against Prevent

The new definition of anti-Semitism now includes “claiming that the existence of a state of Israel is a racist endeavour.”[4] As a result, UCLan said in a statement,

“We believe the proposed talk contravenes the new definition and furthermore breaches university protocols for such events, where we require assurances of a balanced view or a panel of speakers representing all interests.”

“In this instance our procedures determined that the proposed event would not be lawful and therefore it will not proceed as planned.”

Although many including the National Union of Students (NUS) and the University and College Union (UCU) have spoken out against Prevent’s silencing of some people and shutting down debate, revised Prevent training from the authorities appears to have already absorbed the new definition of anti-Semitism and incorporated it into problematising criticism of “Israel”. A screenshot from a Prevent training presentation shows “a list of views that may be regarded as extremist but are not illegal”:[5]