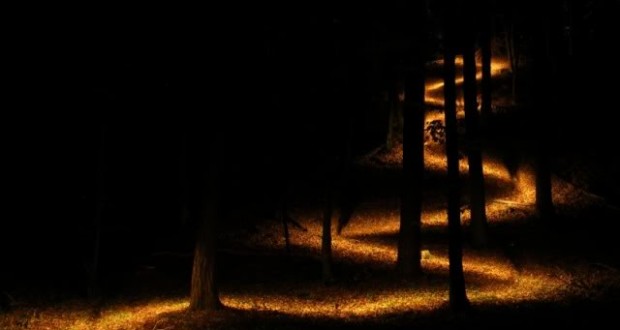 He sways between faith and disbelief, confirmation and denial, and acceptance and rejection. He will be subject to vain suggestions, perplexed and lost, neither a sincere Believer nor an open denier.

When a person turns away from Revelation he turns his back on a guiding light emanating from the heavens. After this there are only darknesses of misguidance, discontentment, and doubt. Allāh, Exalted is He, referred to His Revelation as light when He told the Prophet (Ṣallāhu ‘alayhi wa salam) that: ‘This is a Book We have sent down to you so that you can bring mankind from the darkness to the light, by the permission of their Lord, to the Path of the Almighty, the Praiseworthy’.[1]

When speculative theology (ʿIlm al-Kalām) became popular from the forth Hijri century onwards, doubts and specious arguments began to surface in matters of theology. Those that adhered to it were left perplexed and full of doubt about their faith in the Religion.

What the author described here is based on confessions from famous scholars of speculative theology who in the end returned to the orthodox teachings of Islām and spoke of their problematic experience with it. Ibn Rushd Al-Hafiz (595 AH), who was one of the most knowledgeable of the science, wrote in Tahafut al-Tahafut: ‘Who has written anything in metaphysics that is to be treasured?’ Al-Amidi (631 AH), the top thinker of his time, noted that he could not overcome his doubts on major issues. Al-Ghazali likewise expressed his dissatisfaction with the science, gave it up and took up the study of Ḥadīth. At the time of his death, the Saḥīḥ of al-Bukhārī was in his hands.

All of this misguidance, perpetual doubt, and the resulting discontentment stems from turning away from the Sacred Texts: the Qur’ān and the Sunnah. The hearts of such people became hardened and no longer receptive to the light of revelation. The void that was left inside was instead filled with conflicting thoughts and ideas, fallacies, and never ending philosophical ramblings. Allāh described the internal state of the hypocrites when He said: ‘Their hearts are full of doubt and in their doubt they waver to and fro’[2]; this is also relates to those who turn their back on revelation and instead prefer other sources for enlightenment.

The Prophet (Ṣallāhu ‘alayhi wa salam) once said: ‘Indeed Allāh has overlooked the passing thoughts that come to my nation (ummah), unless they speak of them or act upon them’[3]. His blessed statement indicates that evil and misguided thoughts will certainly pass through people’s minds, however, they will not be held accountable for such thoughts so long as they do not dwell on them, entertain and explore them or worse still, begin to propagate them. The Prophet (Ṣallāhu ‘alayhi wa salam) was teaching his followers that such thoughts should be dispelled whenever they arise and should never be entertained or explored. The ideological warfare that people face today is unprecedented and unrelenting. It is therefore only natural to be afflicted by doubts and apprehension about one’s religion, however the Prophet’s advice is to be followed. He himself would supplicate when he woke from sleep with the words: ‘O Allāh, Lord of Jibrīl, Mīkā’īl and Isrāfīl, Originator of the heavens and earth, Knower of the Unseen and the apparent, You decide between Your servants in their disputes, I beseech You, with Your permission, to show me the truth concerning the matters which people have disputed. It is truly You Who guides whom You will to the straight path’.[4]

Ibn Abil ‘Izz (792AH) noted that the Prophet (Ṣallāhu ‘alayhi wa salam) appealed in the name of the Lord of Jibrīl, Mīkā’īl and Isrāfil to be guided with Allāh’s permission to the truth in the matters wherein people differ because the true life of the heart has been entrusted into the care of these three angels. Jibrīl is entrusted with revelation, which brings life to the heart; Mīkā’īl is entrusted with the rain, which facilitates growth of food which in turns nourishes the heart of living beings; and Isrāfīl is entrusted with blowing the Horn, which will bring the dead back to life for accountability in the Hereafter. [5]

Sheikh Haitham al-Haddad’s explanation of al-‘Aqīdah al-Ṭaḥāwiyyah, edited by Asim Khan, will soon be published as a hardback book. Islam21c have exclusive rights to share extracts from the book for its readers, and will be posting certain sections of the book on a weekly basis. The book: al-‘Aqīdah al-Ṭaḥāwiyyah, is a short text outlining the ‘aqīdah of Ahl al-Sunnah in short statements. Each extract posted is a complete explanation of any one of those statements.