Is LBC’s firing of Katie enough to combat Nazi ‘Solutions’? 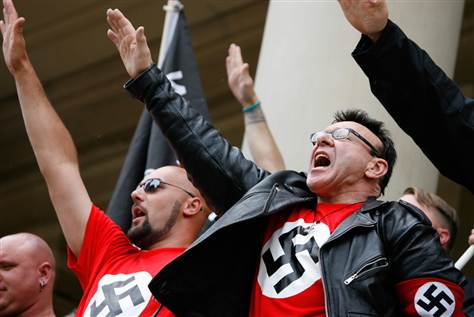 In 1942, a sequence of events eventually culminated in the extermination of nearly 6 million Jewish men, women and children; and it all began with the euphemistically termed “Final Solution” to the Jewish Question. [1] That such inhumanity and manifest evil could be tolerated to occur in the world, with mass consent, is a shameful and incomprehensible blight to our history as mankind. And yet the wheel turns and once again society indulges the advocates of genocide.

In an abhorrent statement made this week, Katie Hopkins cited the Holocaust moniker in a statement that can only be understood as a call to committing the same atrocity against Muslims. According to a tweet by the former Daily Mail columnist and LBC presenter, a “final solution” is needed. 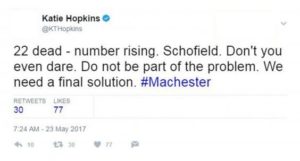 Soon after exposing her values, Hopkins attempted to conceal her initial language, placing the phrase “true solution” in place of “final solution”. [2]

Hopkins is an unabashed Islamophobe who regularly spews intolerant and hateful comments against Muslims, a practice which is deemed acceptable in the world today. Her hatred for Muslims is no revelation, however in her latest comments Hopkins revealed a more insidious menace buried in her world view. Through advocating a “Final Solution” Katie exposed that she in fact sees the heinous crimes committed by the Nazis a legitimate solution, and she wants to replicate the results. To encourage a ‘final solution’ exposes what we all have come to know about Katie Hopkins’ true malevolent nature: she is the kind of person who believes in genocide.

Such language has classically been ignored as many misleadingly argue Islamophobia is not a crime, overlooking its provocative and spiteful nature. However, the normalisation of the Nazi narrative used against minority groups, including Muslims, has been left unchecked for many decades now and it cannot be allowed to continue. Her comments warrant much concern from all communities, let alone minority communities.

The Jewish community, for example, should rightly be concerned about this, particularly if she goes without due legal account as it imparts on a form of anti-Semitism before a form of Islamophobia. It is incomprehensible that in today’s day and age, such reuse of a Nazi trigger phrase that triggered one of the darkest periods in contemporary history can go without due accountability. Is this call for ‘a final solution’ not tacitly inciting the massacre of an entire community, Muslim or Jew without reason?

LBC and Katie Hopkins have agreed that Katie will leave LBC effective immediately.

Today LBC released a statement confirming that Katie Hopkins would be leaving LBC “effective immediately” [3] but a number of points cannot be ignored:

(1) Despite their eventual actions, LBC took far too long to respond despite the massive outcry that resulted from Hopkins’ comments. MailOnline is yet to take any action against Hopkins. This is amidst much controversy surrounding her and her having lost numerous legal battles. And, even more unacceptable is that the police are yet to charge her with any crime. This is remarkably inconsistent with the incarceration of much ‘hate-speech’ and insinuations of anti-Semitism on part politicians and journalists in the near past.

(2) The work does not stop on account of this. There are many more Islamophobes out there and we should continue to drive them out. There are those who will say that Muslims have a victim mentality and should not challenge every offensive and inciteful statement they come upon but this is wrong. Not to do so is to allow the hatred of Islām and Muslims to become normalised. How many who saw the comments are members of the ‘addressed’ community, or members of another still lamenting the tragedy of the mid ninetieth century?

(3) Whilst this was a success, not all cases will result in success and some may be considered failures on further contemplation. All people are asked to play their part in contending such hateful rhetoric, remain active in speaking out against injustice and seek to change a wrong if it is possible.

I am eager to hear the response from the Jewish community.