Following a highly choreographed visit, China's genocide against the Uyghurs and other Turkic Muslims has essentially been backed by the World Muslim Communities Council
Campaigns 12/01/20231 Comment3 Mins ReadBy Campaigns 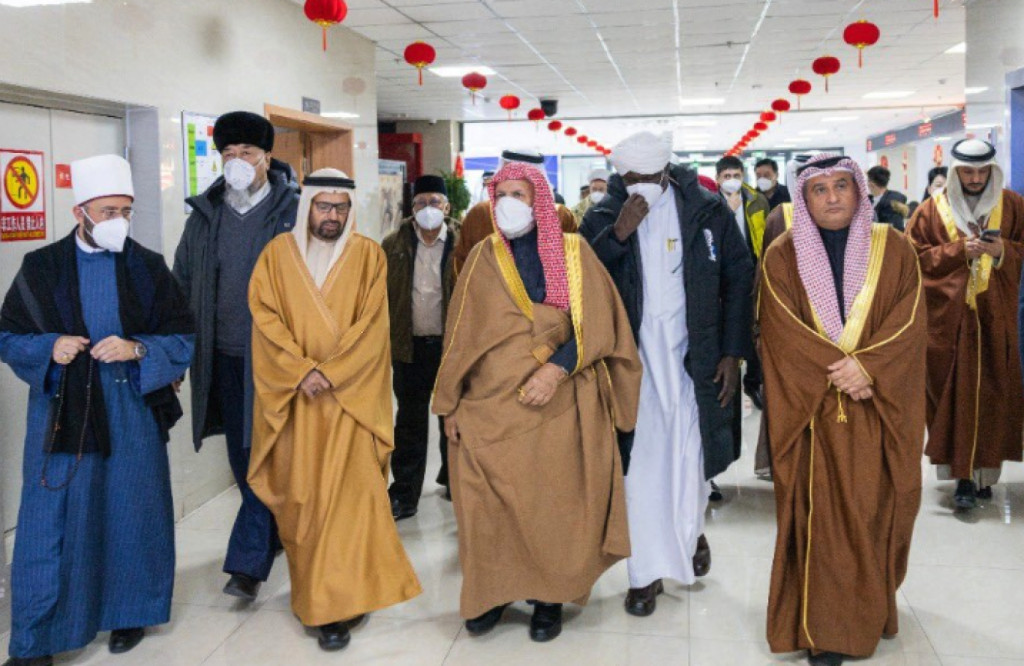 Uyghur activists, scholars, and other influential figures have widely condemned a UAE-China co-ordinated visit to occupied East Turkestan amidst the Uyghur genocide. The World Muslim Communities Council (WMCC) visit to East Turkestan came following an invitation from China. The delegation commended the Chinese government’s “counter-terrorism” policies against Uyghur Muslims after visiting the capital city of Ürümqi, as well as museums in Chinese-occupied East Turkestan. [1]

The delegation included thirty intellectuals and religious scholars from 14 Muslim countries, including – most regrettably – the former Grand Mufti of Bosnia-Herzegovina, where Muslims were themselves victims of genocide in the 1990s.

The organisation that planned the trip, WMCC, released a statement after the visit. In it, the entity noted China’s “historical ties” with the Islamic world, and complemented the successful execution of their “counter-terrorism” plan in “Xinjiang”. [2]

In addition, it was said that the delegation spoke of their economic relationships with China, particularly under the Belt and Road Initiative (BRI), which is a heavily Chinese-financed trade, infrastructure, and investment project that seeks to connect China to the rest of the world. [3]

After a deceptive display of East Turkestan from the Chinese guides, the delegates seemed ignorant of the fact that China applies the “extremist” label to Muslims adhering to basic tenets of faith, such as praying, fasting, wearing the hijab, and refusing to consume pork and alcohol. [4]

“Muslim countries are becoming even more subjective under China’s infiltration policies, economic ties, and unsubstantiated diplomatic relations with China. China’s deception is working fine among Muslim countries, and the complete ruination of East Turkestan – once a sovereign nation and the first Islamic Republic on Earth.

“More than 16,000 religious places are destroyed; over half a million Muslim Uyghur children have been victims of state-run apostasy agendas of China; millions of Muslims are sent to concentration camps; thousands of healthy Muslims are affected by China’s organ harvesting missions; millions of Islamic literatures have been burned and entire Uyghur Muslim [communities] have been criminalised for their Islamic faith.”

Statement from the International Union of East Turkistan Organizations (IUETO)

Imams from Egypt, UAE, Syria and more visited #China + framed the genocide against Uyghur as "Fighting terrorism." These Imams are:

1. Using Islam to faith-wash genocide
2. Bending to Chinese money and power
3. Have Muslim blood on their hands

Unsurprisingly, Uyghur organisations expressed their deep disappointment following the visit. [5] Rightly, they expect fellow Muslims to show solidarity rather than collude with those carrying out the oppression.

The following statement was given by Uyghur activist and IUETO member, Abduresid:

“The Muslim population of East Turkestan feel very hopeless about the delegation visit of the World Muslim Communities Council to East Turkestan following an invitation from China on 8th January, and the latest statement of the chairman…

“Their statement used the same language China created for eliminating Islam and ethnic cleansing of the Muslim population by defining all Islamic and ethnic features as terrorism and extremism.”

It is evident that China is feeling the pressure from the international community, and that this tour is the latest in a series of diplomatic and cultural visits from Muslim delegates to push their systematic “white-washing” campaign and delegitimise claims of genocide. [6]

Stand4Uyghurs is dedicated to standing firm with our Uyghur brothers and sisters against China’s oppression and persecution. We will continue to mobilise together and raise our voice! Support the Stand4Uyghurs movement!

Sign up today to stay up to date with our latest action and activities.