Quranic Community #2 | An Overview of al-Ḥujurāt 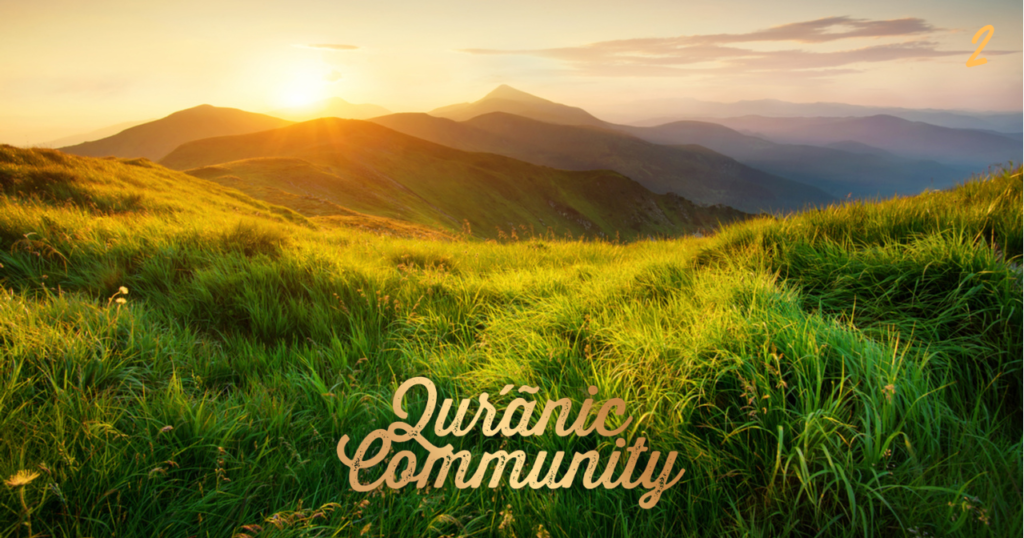 In the last article, we spoke of the Qur’ān, the distinction of its people, and its inimitability and far-reaching impact on its seekers. This leads us to one of its 114 chapters – al-Ḥujurāt. Before we delve into this chapter, let us take a moment to revise our intentions. Intentions are dynamic and challenging to perfect. Each believer will have their own method of perfecting their intention. Irrespective of the technique used, it must be a recurrent and dedicated effort, revisiting the worthy intentions that often drown under the waves of human gatherings, clout, or positive reactions.

Time and effort are better dedicated towards what will last. Imagine dedicating years compiling a piece of work desiring a moment of transient human recognition. Then on the Day of Resurrection, you find that those who recognised you wanting nothing but their own salvation on that day, even at your own expense! As such, we should strive to intend:

May Allāh grant us sincerity and truthfulness in pursuing that objective and bless this study of ours.

The Format of this Series

The Qur’ān is traditionally taught through what is called Mudarasah, which aims to create a dialogue and two-way learning process. Admittedly, this is challenging to achieve through text articles. The reader, however, can use some of the ideas and reflections presented to open the floor for contributions when teaching them to others. An attempt has been made to induce thought and questions where possible, with some answers provided. The Qur’ān is about studying collectively as there is more Barakah and benefit in doing that.

This study attempts to oscillate between technical theory, application, and heart-softening reminders, balancing between each as much as possible if Allāh wills.

We will try to delve into the meanings of verses we will study, but also add many more dimensions. This will include the wider context of these meanings, how they relate to one another, some of the implied messages, and some reflections on these meanings and ways to apply them in our lives. The delivery of these tools and techniques will help us achieve our three primary objectives, outlined in ‘intentions’.

Each forthcoming article will briefly contain what is known as Tafsir and will conclude with Tadabbur.

Tafsir can be loosely translated as ‘exegesis’, ‘interpretation’, or ‘clarification’ and is both a process and result (verb and noun). Literally, the word comes from the Arabic word ‘Fassara’, meaning exposition (Kashf) and clarification (Bayān), clarifying the explicit meanings of the Qur’ān according to Allāh’s intention and to the interpreter or compiler’s best ability. It is arrived at using the various tools and sciences surrounding the study of the Qur’ān. According to Badr al-Dīn al-Zarkashi:

“(Tafsir is) A science through which the Book of Allāh, revealed upon His Prophet Mohammad (sall Allāhu ʿalayhi wa sallam), is understood, its meanings clarified, and its rulings and wisdoms derived” using the various sciences that underpin this endeavour, including “language, grammar, syntax, articulation (Balāghah), Islamic Fiqh, recitations, reasons for revelation, and the science of abrogation.”

Tadabbur is typically translated to ‘reflection’, ‘derivation’, or ‘contemplation’. It comes from the word ‘Dubura’ meaning ‘the end’ of something. The ‘end’ implies that there must be something available to begin with from which to derive ‘an end’! It is thus looking to the ‘implication’ of a ‘Tafsir’ arrived at and what can be derived from Allāh’s words, including personal and societal implications of a verse. Thus, if Tafsir is to understand the intended meaning, Tadabbur is to reflect on that meaning and its implications seeking to a) increase Iman; b) acquire beneficial knowledge; and c) carry out good action.

The process of Tafsir is laborious and involves having mastered the large collection of sciences that underpin the intended meanings of the Qur’ān. Having acquired and understood these basic meanings as a requisite, the exercise of Tadabbur becomes not only encouraged but imperative on everyone. As its Arabic root suggests, it also entails concerted effort and mental exercise. Tadabbur, is, in fact, the purpose of the Qur’ān’s revelation:

“It is a Book We have sent down to you, full of blessing, so let people of intelligence ponder its Signs and take heed.”[1]

Allāh rebuked the hypocrites in Madinah, who, having understood the meanings of the Qur’ān since it was revealed in their language, failed to consider its inimitability, authority, or carry out its implications:

“Will they not ponder the Qur’ān? If it had been from other than Allāh, they would have found many inconsistencies in it.”[2]

It must be noted that with the above definition of Tafsir in mind, the literal Qur’ānic text revealed upon the Messenger (sall Allāhu ʿalayhi wa sallam) is the unadulterated Arabic Qur’ān. Translators of the Qur’ān have followed the same process of exegesis. As such, these translations should be considered Tafsir rather than non-Arabic manifestations of Allāh’s revealed Book. In this series, we have relied primarily on the priceless translation of Aisha Bewley, with small deviations here and there.

This series will cautiously present the Tafsir of the Qur’ān, as is available in some of the renowned books of Tafsir, separating out ‘reasons for revelation’. It will then delve into some Tadabbur, with some sourced from authors of Tafsir or extracted from their works, and others derived through some contemplation by Allāh’s Will. This section is by no means exhaustive, but comprises the bulk of this work.

And Allāh is the source of strength.

Al-Ḥujurāt is the 49th chapter of the Qur’ān. Many, if not most, of those who have delved into its meanings have concluded that it is centred around:

“Nurturing the behaviour of the Muslim Ummah.”

Although it speaks of general behaviours and ethics, the essential caveat is that these values can only be embraced and realised with the prerequisite Iman, a wholesome term comprising ‘inner belief’, ‘verbal validation of that belief’, and its ‘manifestation through action’.

Only with Iman can many of the ethics inside the Surah be appreciated. You will see that even al-Ḥujurāt’s ‘outer’ ethics are inextricably linked to inner presuppositions and regulations. Societies that lack Iman will defy regulation as a concept, let alone being told to regulate the inner self. Without Iman, most will only regulate their manners in the presence of others. Unless one is conscious of Allāh – who is ever-watchful over our hearts and secrets – why would one assume ethics in secret?

Similarly, you cannot expect a person who rejects Allāh altogether, or Mohammad (sall Allāhu ʿalayhi wa sallam), to put them both ahead of their own ideas and beliefs. Therefore, we can state that the main theme of Surat al Ḥujurāt is ‘nurturing and perfecting the mannerisms of believers (Mu’minūn).’

Remarkably, Allāh addresses the believers through “yā ayyuha allathīna āmanū” (“you who have Iman”) five times. On one occasion, He addresses all people generally with “yā ayyuha al-nās” (“mankind”), with the latter tied to the concept of Taqwa (God-consciousness). Taqwa is the deep cognisance of God that encourages good action and prevents one from doing evil. The level of Taqwa represents a person’s honour by Allāh’s measurement. It is thus fitting for this address, containing a universal criterion and concept, to be addressed to all of humanity

When it comes to recognising the benchmark of the ultimate selection and distinction known as Taqwa, it must be expressed to every human being equally, irrespective of whether they are Mu’min or Kāfir. It is also what differentiates all members of humanity, irrespective of creed, colour, language or nationality.

Surat al Ḥujurāt pays particular emphasis on the perfection of characteristics and manners towards the Messenger of Allāh, as well as between one another, both in one another’s presence and absence. It speaks of such manners in times of reconciliation and peace, in times of dispute and argumentation, and with those who we can call ‘less practicing’ or possessing lower levels of Iman, i.e. the Fussāq (discussed later). In each of these circumstances, Allāh reminds us of His ultimate awareness of the most secret matters and thoughts hidden in people’s hearts and in their subtle actions. Al-Ḥujurāt, therefore, addresses mannerisms towards:

Each interaction above is preceded and introduced with yā ayyuha allathīna āmanū.[3] We will discuss how each individual section of the Surah serves its overall theme or purpose. ‘Perfecting’ good manners must make provision for dispelling their opposite, namely, the characteristics that some had picked up in their days of pre-Islamic ignorance (Jāhiliyyah). The bad manners of the Jāhiliyyah included:

Each one of these bad manners are individually remedied by al-Ḥujurāt, reinstating them with upright ethics and reinforced by the pure religion of Islam that had spread throughout the precincts of Arabia. Without doubt, an array of ethics is imperative for each and every one of us on our journey to Allāh and the Home of the Hereafter.