CAGE Director charged under Schedule 7, Terrorism Act. What does this mean for British Muslims? 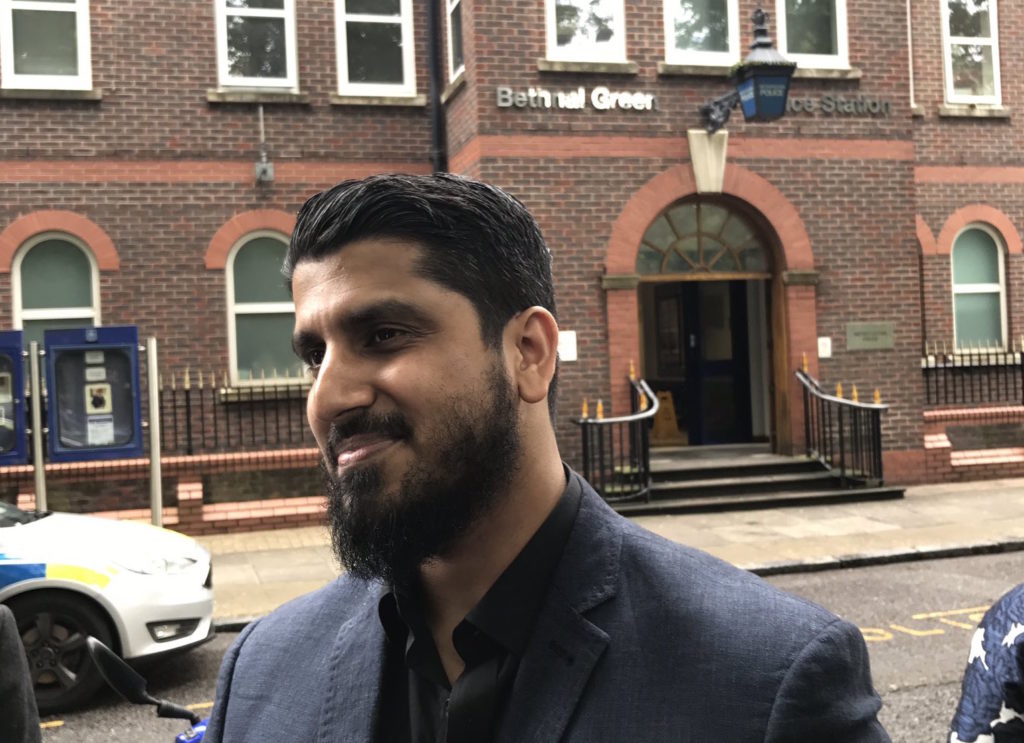 Brother Muhammad Rabbani, International Director of advocacy group CAGE UK has been charged after heroically refusing to disclose his password under Schedule 7 of the Terrorism Act. He was released on bail and is set to appear at Westminster Magistrates Court on the 20th June 2017. CAGE are an advocacy organisation whose stated aim is to highlight and campaign against state policies developed as part of the War on Terror and seeks to free detainees who are held without charge and tortured.

On 20 November 2016, Muhammad Rabbani was stopped at Heathrow Airport when returning from his travels from abroad under the auspices of Schedule 7 of the Terrorism Act 2000. Rabbani was asked to provide the password to his electronic devices including his laptop and phone. The devices contained confidential client information. In accordance with CAGE’s commitment to client confidentiality,  Rabbani refused to provide access to his passwords due to the trust he was given by a client – a survivor of torture. In Islamic parlance, this is known as an Amaana (trust) that he could not betray without seeking permission first.

He cooperated with the authorities throughout and explained to them that he would like to seek consent from his client first and, provided he was in agreement, would then happily give them access to his devices. There was no accusation of suspicion that Rabbani had engaged in any crime or terrorist activity. He was, nevertheless, arrested by the police and released on bail, due to return to the police station on 17 May 2017 when he may be charged with “wilfully failing to comply with a request to provide his password”. Rabbani contends that it was not wilful as his duty of care to a client did not permit sharing the information.

What does this mean for Muslims?

As Muslims, we know the duty of trust and confidentiality are vital. Indeed the Messenger of Allāh (sall Allāhu ʿalayhi wa sallam) was known as “Al-Amīn” the trusted one.

“Successful indeed are the believers. … Those who are faithfully true to their Amanaat (all the duties which Allāh has ordained, honesty, moral responsibility and trusts etc.) and to their covenants… these are indeed the inheritors. Who shall inherit Paradise. They shall dwell therein forever.”[1]

Protecting confidentiality is an essential value in all human relationships, no less in research and in dealing with victims of torture. Such relationships are built on trust and on the understanding that confidential information will not be disclosed. To breach this trust could cause further harm and distress to the victim.

Rabbani has committed no crime – the information he is protecting is in relation to the case of a trauma survivor, with specific undertakings not to reveal that information.

Rabbani’s principled stance is one in which he is upholding the noble Islamic duty of trust, and indeed one which we as Muslims should not only support, but be proud of. We should be proud that he is standing up to protect not himself, but rather the weak and the oppressed. We should be proud that it is a Muslim who has taken this courageous position in challenging unfair laws that affect the lives of all people, including the majority of Muslims who are disproportionately harassed whilst travelling.

The disproportionate use and execution of Schedule 7 powers by the police has convinced Rabbani that neither he nor other Muslims need suffer these excessive stops any longer. It is the view of many that Schedule 7 is being used more as an intelligence gathering exercise, rather than a means to stop potential terrorist acts.

Br Rabbani has carried out an act of civil disobedience. Civil disobedience is a form of passive yet effective revolution and rebellion. Rebellion is mainly an act of resisting and defying the political authority. Acts of rebellion can vary from a mere passive non-compliance with the orders of those in power to full armed insurrections. Br Rabbani has understood the Islamic doctrine that a proper balance-of-evils analysis, that takes into account the utmost importance of realising justice, will favour withstanding the harms of civil disobedience until the tyranny which has paralysed a people is completely eliminated. It was a method which was in fact used by the Muslims in earliest period in Islām known as the ‘Makkah period’.

Reflecting on Rabbani’s case and the fact that he is protecting a torture victim reminds me of the example of a great Sahābi. History has passed many a great man and yet their story does not remain with us today. Then there are other men who did something so noble that Allāh (subḥānahu wa taʿālā) does not allow their names to be forgotten. One such man was the Sahābi ʿAbdullāh b. Hudhafah as-Sahmi (raḍiy Allāhu ʿanhu).

In 19AH, ʿUmar (raḍiy Allāhu ʿanhu) dispatched an army to fight against the Byzantines. In it was ʿAbdullāh b. Hudhafah As-Sahmi. The Byzantine Romans captured a contingent of the Muslim force, inducing ʿAbdullāh, and they were brought before the Emperor, Heraclius.

Heraclius said, “Become a Christian, and I will give you a share of my kingdom and my daughter in marriage.” ʿAbdullāh said: “If you were to give me all that you possess and all that Arabs possess to make me give up the religion of Muḥammad even for an instant, I would not do it.” Heraclius said, “Then I will kill you.” ʿAbdullāh said, “It is up to you.” Heraclius then gave orders that he should be crucified, and commanded his archers to shoot near his hands and feet while ordering him to become a Christian. But still he refused. Then Heraclius gave orders that he should be brought down, and that a big vessel made of copper be brought and heated up. Then, while ʿAbdullāh was watching, one of the Muslim prisoners was brought out and thrown into it, until all that was left of him was scorched bones. Heraclius ordered him to become a Christian, but he still refused. Then he ordered that ʿAbdullāh be thrown into the vessel. He was put in the pulley to be thrown into the vessel. At this moment ʿAbdullāh wept and Heraclius hoped that he would respond to him but ʿAbdullāh said,

Hoping to get something from ʿAbdullāh, the Emperor made his final demand:, “Will you kiss my head? I will then set you free?” “And all the Muslim prisoners also?” asked ʿAbdullāh. The Emperor agree and ʿAbdullāh said to himself,

“One of the enemies of Allāh! I shall kiss his head and he shall set me and all other Muslim prisoners free. There can be no blame on me for doing this.” He then went up to the Emperor and kissed his forehead. All the Muslim prisoners were released and handed over to ʿAbdullāh. ʿAbdullāh b. Hudhafah eventually came to ʿUmar b. al Khaṭṭāb and told him what had happened. ʿUmar was greatly pleased and when he looked at the prisoners he said,

“Every Muslim has a duty to kiss the head of ʿAbdullāh b. Hudhafah and I shall start.”

ʿUmar then got up and kissed the head of ʿAbdullāh b. Hudhafah.

This story is reminiscent in many ways to that of Rabbani. ʿAbdullāh (raḍiy Allāhu ʿanhu) had taken the undignified step of kissing the head of the disbelieving oppressor, not to save himself, but to save his companions who, much like the associate of Rabbani, had also been tortured. Rabbani has taken the decision to risk being imprisoned to save the dignity and trust of his associate.

Whatever the outcome, Rabbani is a hero and I for one will kiss his forehead as a mark of respect for the courageous step he has taken.

Even though Br Rabbani has been charged, know it was not the State’s decision and that it was in fact Allāh’s decision to continue to his test his ‘Abd (servant) and elevate his rank InshaAllah.

We pray Allāh protects him, saves him from all harm, and keeps him steadfast and firm.