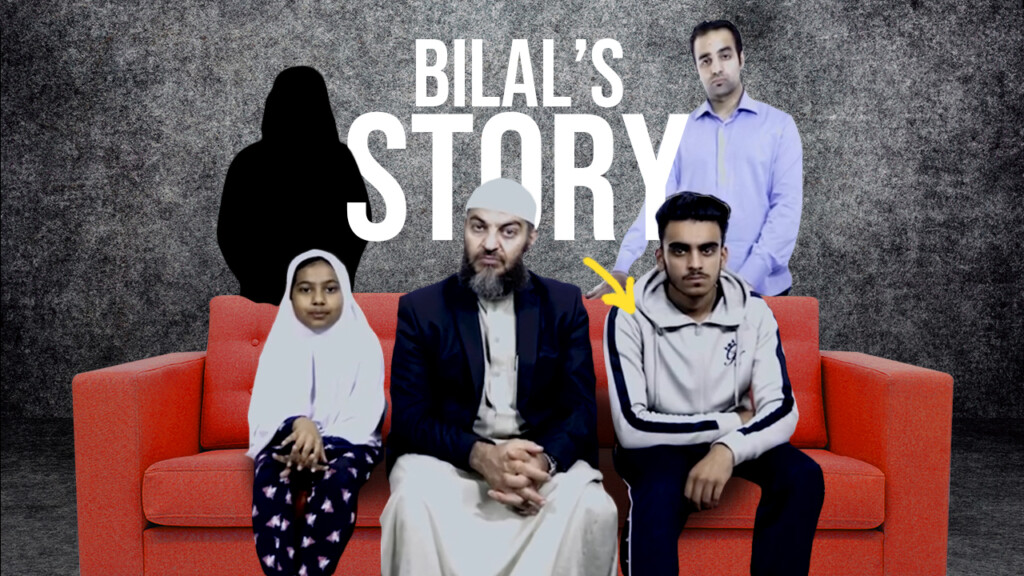 This is the third chapter in our story of an unsuspecting British Muslim family. Click here for the first chapter, and here for the second.

After little Amina’s ordeal in the classroom, and her father’s Schedule 7 stop, we take a peek into a secondary school classroom where Amina’s brother, Bilal, is on the back foot.

Like any teenager finding his feet, he attempts to think outside the box and question the inherited norms of his teacher. The lesson plan says that our current political system is the best there can be, but Bilal is finding it difficult to reconcile this with the plethora of political and social ills that disturb his God-given natural disposition (fitra) and conscience.

What would be a routine, healthy conversation for any other teenager, turns into something else for Bilal.

The teacher reaches for the usual decontextualised soundbites and Orientalist stereotypes recycled by what appears to be a larger number of people. What was once the preserve of zealous missionaries, xenophobes and racists, appears to be becoming common among “polite” society. This is what Baroness Sayeeda Warsi meant when she famously said that “Islamophobia has passed the dinner table test” back in 2011; the same year David Cameron made his infamous “Munich speech” calling for “Muscular Liberalism” against those “Islamic extremists” with illiberal, backwards beliefs.

As the “conversation” proceeds, it feels more and more like an inquisition into his Islamic beliefs, despite him not bringing them up. As we discussed in the second chapter of this story,[1] it is not surprising that Muslims’ beliefs are under the spotlight, given that the routinely-refuted premise of the pseudoscientific counter terrorism apparatus (the “backbone of Islamophobia”[2]) is that orthodox Islam is inherently suspicious. Incidentally, after class Bilal was reported to his school’s counter-extremism “Prevent” coordinator for espousing “dangerous” views.

However, what is noteworthy is that Bilal—like many of us—lacks the confidence and unspoken permission to articulate his thoughts from his own perspective, instead being drawn into a hegemonic discourse loaded to the brim with presumptions and innuendo. What is more subtle and dangerous than one’s body being restricted is restricting one’s thinking, discourse and permission to articulate their thoughts, for it happens without most people realising.

Many people instinctively know that this is wrong, however do not know how to go about addressing it in a comprehensive, constructive way. It is easy to become emotional and reactive, responding to the loaded questioning of a hostile discourse rather than confidently exposing it and articulating your beliefs with pride.

We are telling this story to show how easy these micro-aggressions on young people’s īmān can be carried out. Do you think Bilal will have the confidence to speak his mind in school after this? What impact will it have on his īmān? Will he able to articulate his views clearly and confidently, without being coerced into submission?

Many of us are lost when it comes to responding to the ideological attack in a constructive, confident way. We often unwittingly fall into character roles made for us by those—knowingly or unknowingly—pushing a hostile agenda. Muslims who naturally hold divine values are painted as extreme, backwards, or just weird—a fate worse than anything else for some teenagers. Objectively, we are none of these, but we are interpreted this way partly due to the difference in power and money behind the different narratives and worldviews, and partly because we do not have crystal clear narratives to articulate our views on delicate matters and disagreements authentically and in a mature, balanced way. And most of us do not know our rights, so are easily intimidated into silence—“Don’t talk about Sharia in school again…”

This makes many Muslims feel stuck between a rock and a hard place. Do we “fit in” into wider society, or do we “stick to our guns”? The reality is this is a false dichotomy; there does not need to be a conflict between remaining steadfast to divine values and being a successful member of society. But we need to invest in strengthening our community’s ability to speak for itself.

Islam21c has been honoured to be involved in addressing people’s confidence in Islam and Sharia, by providing guidance and narratives that are effective yet uncompromising. Countless articles, infographics, videos and podcasts are crafted regularly to serve one unique vision.

As I mentioned in the first article in this short series,[3] that vision is instilling confidence and impact in Muslims, and everything we do—all of our transformational digital content—has this in common.

Nothing is more fulfilling than engaging with brothers and sisters—particularly young people—and seeing their confidence grow. When they get to see the beauty, coherence and eminence of the Sharia accurately, it takes root deep within their mind and soul as it is, by its nature, irresistible when presented in an untainted way.

Once they have that love and knowledge of Islamic matters that others are nervous to discuss, many brothers and sisters feel a sense of ease around how to approach these issues from our own perspective, rather than reacting to someone else’s provocations.

But the truth is we need help distilling and disseminating these narratives, and helping millions more grow in their confidence and love of Islam.

Many fall prey to massively-funded misinformation campaigns from a billion dollar Islamophobia industry—which operate heavily in the digital world. Do Muslims have sufficient resources and guidance to resist this?

This is why we are working hard with experts to empower the community’s imams, du’at and activists with mature narratives to bridge the polarisation that some have worked hard to create.

This requires us to continue our work to overcome obstacles to Muslim confidence and empowerment, such as that shown in this story. But the coronavirus lockdown has also had a severe impact on our financial situation, and we are in danger of not being able to carry out this work.

Stay tuned because tomorrow we will be releasing the final chapter in this story: the tragically common story of Amina’s mother.