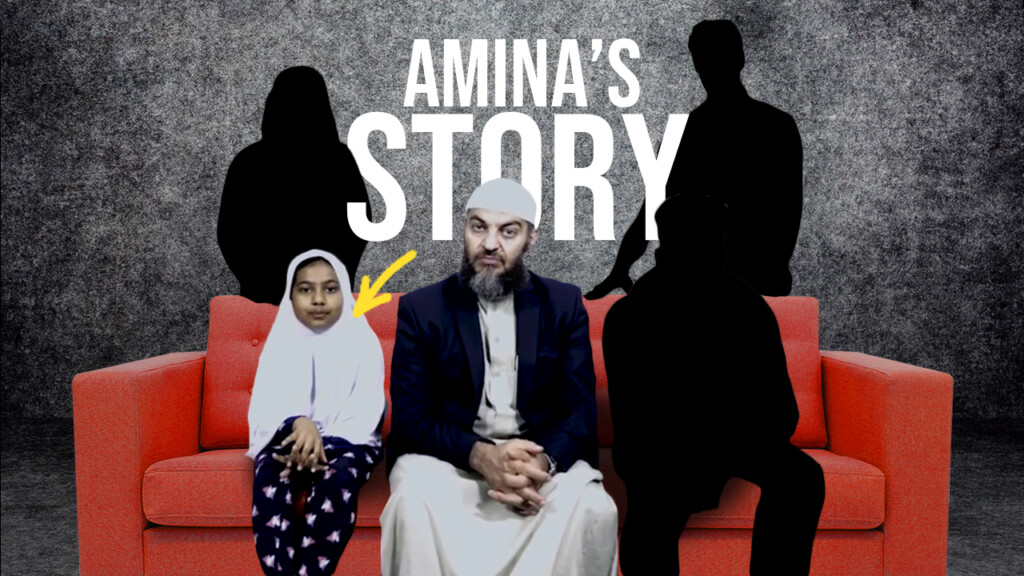 Reading between the lines of Amina’s story

This is the first chapter in our story of an unsuspecting British Muslim family.

Little Amina is asked to take part in a role play in her primary school classroom, with her friend Sara. It’s like any other day at school. However, there’s something different about this role-playing exercise. The teacher has engineered this—as part of a campaign whose literature we have written about before[1]—in order to “smash” so-called “heteronormativity” in primary schools.

Amina and Sara are asked to play two mums “married” to each other. When Amina’s natural disposition (fitra), which her parents worked hard to preserve from birth, automatically questions this, she is uncritically shut down by the very voice that she expects to nurture her emotional and intellectual growth—the teacher. She feels bullied into feeling like her natural question—who’s going to be the daddy?—is something incorrect, or to be ashamed of or mocked.

This is a story played-out increasingly across the world where privileged and powerful pressure groups’ ideological, social and moral constructs are imposed on others—particularly minorities—as though they are universal facts about the world. And it starts at school.

We are telling this story to show how subtle this exercise of coercion is, how easily done, and how easily overlooked by parents. After all, do you think Amina will speak to her parents about this? Do her parents have the time and resources to articulate their disagreement clearly—and confidently—with her school? Do they know their rights as parents?

Stay tuned every odd night 21.30 BST as we release the next chapter in this story: Next will be the story of Amina’s father. Click the player to watch Amina’s story.

Want to be part of the solution? You can by supporting Islam21c so we can empower more families but we need your support to carry on our work, click here to donate.

Many of us are lost when it comes to responding to the ideological attack in a constructive, confident way. We often unwittingly fall into character roles made for us by those pushing a hostile agenda. Muslim parents are painted as extreme, intolerant, bigoted. Objectively, we are none of these, but we are interpreted this way partly due to the difference in power and money behind the different narratives and opinions, and partly because we do not have crystal clear narratives to articulate our disagreements authentically and in a mature, balanced way. And most of us do not know our rights as parents, so are easily intimidated into silence—“Just don’t talk about this to your teachers”.

This makes many Muslims feel stuck between a rock and a hard place. Do we “fit in” into wider society, or do we “stick to our guns”?

The reality is this is a false dichotomy; there does not need to be a conflict between the two. But we need to invest in strengthening our ability to tell our own stories, rather than being predetermined characters in other people’s tales—usually the villain!

Some people have an agenda to create division and polarisation, spinning this into an issue of Muslims being backwards or intolerant; when ironically it is in fact Muslims who are calling for greater tolerance of genuine diversity and freedom of conscience—which other non-Muslim minorities afraid to speak up often thank us for.

However, many parents complain there is a lack of clear guidance about this topic, and are exhausted by the flurry of sensationalist and polarising stories filling up their news feeds and WhatsApp groups every now and then. There is an overload of information—and plenty of fake news—what do they do?

Islam21c has been honoured to be involved in addressing this issue, by providing guidance and narratives that are compassionate yet uncompromising. From spearheading a joint statement of over 160 scholars and imams setting the record straight,[2] to delving into the literature and exposing the secretive pseudoscience behind programmes to proselytise LGBT beliefs,[3] to giving a space for parents disagreeing with those programmes to put it in their own words—in writing,[4] and in our Unscripted podcast,[5] for example. This is while they are misrepresented time and time again by the usual suspects in the mainstream media hell-bent on demonising them.

Islam21c can do more but we need your support click here to donate to support Islam21c and share in all this reward.

To teach parents their rights we have published—and by the grace of Allāh continue to publish—impactful content including a six-part Parental Guidance video series with SRE Islamic,[6] a step-by-step guide for getting involved in our children’s schools. Not just for LGBT issues, but to exercise our rights and duties as parents to be active, constructive members of our societies.

As I mentioned in yesterday’s article,[7] our business is instilling confidence and impact in Muslims, and everything we do is with that in mind, which is what all of our transformational digital content has in common. Part of making Muslims feel comfortable and confident in their skin as proudly Muslim Brits is speaking up in theatres that are traditionally hostile, such this clip from Sky News and Talk Radio.

Help us give Islam a voice in the mainstream. Donate now and share in the reward

Nothing is more fulfilling than engaging directly with brothers and sisters—particularly young people—and seeing their confidence grow. When the un-spoken assumptions and beliefs underlying LGBT ideology, for example, are laid bare for them, they are often extremely grateful and feel a sense of ease around how to approach these issues from our own perspective, rather than reacting to someone else’s provocations.

But the truth is we need help distilling and disseminating these narratives and others, especially ahead of statutory relationships and sex education being imposed in schools.

We have seen some schools take this as a carte blanche to impose subjective values, and moral and ideological constructs onto children—particularly from minority backgrounds. Other schools are unaware of the details of their obligations and rights of parents, so fall prey to massively-funded misinformation campaigns from anti-Muslim or anti-Islam pressure groups. Do Muslim parents have sufficient resources and guidance to resist this?

This is why we are working with education experts to empower not only parents with this knowledge, but the community’s imams, du’at and activists with mature narratives to bridge the polarisation that some in the mainstream media and pressure groups have worked hard to create.

This requires us to continue our work to overcome obstacles to Muslim confidence and empowerment, such as that shown in Amina’s story. But the coronavirus lockdown has also had a severe impact on our financial situation, and we are in danger of not being able to carry out this work.

If you missed the opportunity to donate last night to support this cause, you have the chance to support it right now. You can click here to donate to support Islam21c for our Ramadan Heroes campaign.

Stay tuned every odd night 21.30 BST as we release the next chapter in this story. Next will be the story of Amina’s father.