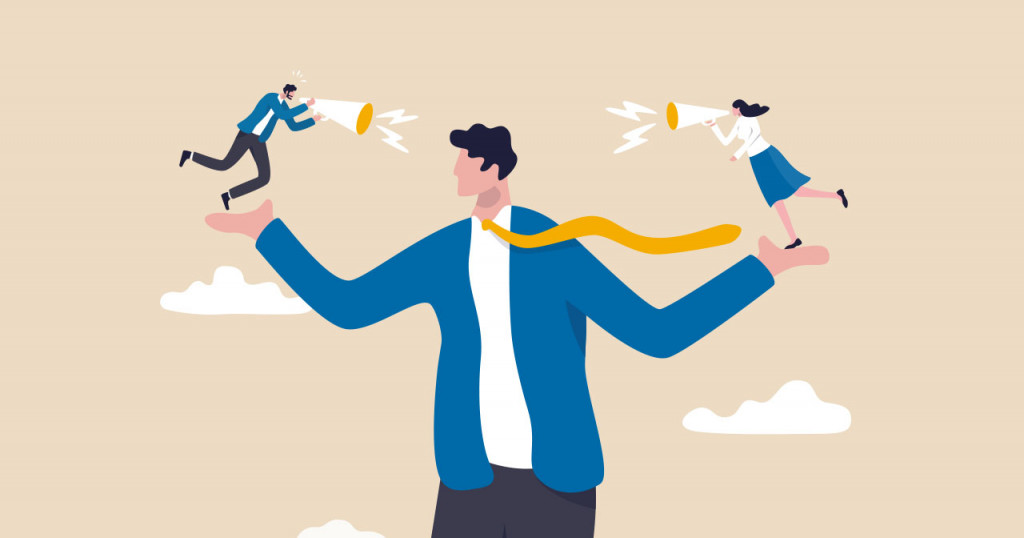 In the first part of this 2-part series, we looked at how advice should be offered. Here, we discuss how it should be received. But let us first look at how it should not be taken.

Here are 10 common ways describing how not to respond to advice.

A common example of this today is the reply of “whatever” which is essentially another way of saying “I don’t care”.

It is the exact opposite sentiment that we should express, which is that of deep concern.

One time, the Prophet ﷺ spoke about ‘Abdullah ibn ‘Umar, and he said:

When ‘Abdullah came to know of this advice, he immediately responded by starting to pray the night prayer regularly. He demonstrated great concern of the advice that he was given.

We need to follow this example and take on board the advice we are given on how we can improve ourselves. It is for our own benefit.

2. Responding by deflecting the matter upon the one giving advice

An example of this is by saying “says you!” or “look who’s talking!” or “what about when you did such-and-such?”

Instead of considering the advice that is given, the responder deflects away from it and turns upon the advisor.

This is exactly how Pharoah responded to Moses, when he was advised to let the Children of Israel go.

Rather than accepting the sincere advice given, he retorted by commenting on what Moses had previously done.

Let us not follow in the footsteps of one of the most wretched human beings that ever walked this Earth.

3. Responding by falsely claiming not to be able to change

Usually the claim of “I can’t” is in reality a stance of “I don’t want to”.

This is common in matters of addiction, such as smoking or drinking alcohol. When advising someone to give up this habit, their addiction prevents them from accepting such advice.

Or it may be simply due to pride, as it requires humility to accept advice from others.

There is an example of this in the life of the Prophet ﷺ himself when he advised a boy to eat with his right hand.

Salamah bin Al-Akwa’ (may Allah be pleased with him) reported:

My father said that a person ate in the presence of Messenger of Allah ﷺ with his left hand. He ﷺ said, “Eat with your right hand”. He said, “I cannot do that.” Thereupon he (the Prophet) said, “May you never do that.” It was pride that prevented him from doing it. And he could not raise it (the right hand) up to his mouth afterwards.[3]

We need to be mindful of falling victim to our desires, and even more so of being overcome by our ego. Both ailments make accepting advice extremely difficult.

An example of this is by saying “Who are you to say that to me!”

There is not a more atrocious example of such anger than that of the ignorant polytheists of Quraysh. When the Prophet ﷺ used to advise them to worship only Allah, many of them would be outraged at the mere suggestion.

One time, while the Prophet ﷺ was praying in the hijr of the Ka`ba; `Uqba bin Abī Mu’ait came and put his garment around the Prophet’s neck and throttled him violently. Abū Bakr came and caught him by his shoulder and pushed him away from the Prophet ﷺ and said, “Do you want to kill a man just because he says, ‘My Lord is Allah?’[4]

Will we respond to advice with humility and humbleness, or anger and outrage?

When Iblīs was commanded to prostrate to Adam, he refused. Allah asked him:

He attempted to justify his behaviour. The reality is that there was no justification, it was only his pride and arrogance that prevented him, as Allah confirms in the next passage:

Let us do away with any ego whenever we are advised.

6. Responding by blaming others

Not only did Iblīs justify his disobedience, but he had the audacity to blame Allah for it! He said:

We can at times fall into this trap, preferring to blame others instead of ourselves to divert any criticism away from ourselves.

Following the same story, let us now consider how our father Adam and our mother Hawā responded when Allah called out to them:

If there was any time to offer an excuse, this was it. Allah Himself blamed Iblīs for what occurred, when He said:

But despite this, there was no excuse given, only total acceptance of responsibility and full ownership of accountability:

So, the lesson here is that even when there are excuses available, do not entertain them. Rather, acknowledgement of the mistake is far better.

We can look again at the example of Pharoah. He was advised for years to take heed, but refused to do so, procrastinating until the very end:

But it was simply too late. Allah says:

Let us respond immediately to the advice we are given, and let it not wait until tomorrow.

An example of this is when a particular action is called out, the person responds defensively saying “it’s only such-and-such”. In other words, this person does not consider it a serious matter.

Anas, may Allah be pleased with him, warned us against this very attitude when he said:

“You people do (bad) deeds (commit sins) which seem in your eyes more minute than [a] hair… while we used to consider those (very deeds) during the life-time of the Prophet ﷺ as destructive sins.”

It is crucial that we take every piece of advice seriously, regardless of how trivial Iblīs may try to make it seem to us.

Refusal to accept advice can be devastating.

When Noah advised his son to join the ark, he refused and denied the coming reality that he was warned of.

And it sailed with them through waves like mountains, and Noah called to his son who was apart [from them], “O my son, come aboard with us and be not with the disbelievers.”

[But] he said, “I will take refuge on a mountain to protect me from the water.” [Noah] said, “There is no protector today from the decree of Allah, except for whom He gives mercy.” And the waves came between them, and he was among the drowned.[11]

Let us heed this lesson, the next advice that we are given may be the very thing that we require for salvation.

So, if these are some examples of how not to take advice, then, how should we respond?

With appreciation and gratefulness, followed by acting upon the sincere advice given.

Remember that this advice is for our own benefit. We should seek more of it, not shun it in anyway at all.

Yes, advice should be given kindly with wisdom. But whatever form that it is given to you in, remember to respond in the best way possible.

And yes, the advisor should be acting upon their own advice that they are giving. But if they do not, then do not allow this to deflect you from the point being made. That is true sincerity.

Imagine people avoiding advising you because of how you may react, when that very piece of advice was exactly what your soul needed to be successful?

Now the question is, in what way will you respond to the advice given here?