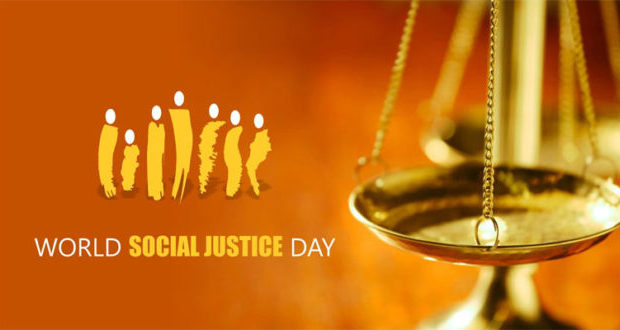 Today is the UN’s World Day of Social Justice.[1] Many people naturally clamour for “social justice”, they want a turn of the tide against the evils that have haunted humanity through the ages. The term social justice however is of recent vintage. It first appeared in political debate in the early nineteenth century. It was employed by political thinkers like John Stuart Mill and its use has since become widespread. Social justice implies that the overall pattern of distribution in a society ought to be brought into line with principles of justice. There have been two major conceptions of social justice: one embodying the notions of merit and desert; the other embodying notions of need and equality.

For the UN, the pursuit of social justice for all is at the core of our global mission to promote development and human dignity. Tragically, however, social justice still remains an elusive dream for an appallingly large portion of humanity. Social justice is, therefore, referred to as ‘the Neglected Offspring of the Modern Human Rights Movement’. As Leonardo Boff, the Brazilian Theologian and Human Rights Activist, once said,

“Today social justice represents one of the most serious challenges to the conscience of the world. The abyss between those who are within the world ‘order’ and those who are excluded is widening day by day. The use of leading-edge technologies has made it possible to accumulate wealth in a way that is fantastic but perverse because it is unjustly distributed. Twenty-percent of humankind control eighty percent of all means of life. That fact creates a dangerous imbalance in the movement of history.”[2]

Social justice, however, seems to be a hard term to pin down. Since it is essentially a concept, it means different things to different people. Trying to find a good definition has proven difficult as most are too vague to be of any use. Answers will be based on a variety of factors such as political orientation, religious background, and political and social philosophy.

In Islām, social justice is rooted in a strong underlying egalitarian ethic based on the Quranic principle that, for Allāh (subḥānahu wa taʿālā), the only differentiation among creation is in piety (taqwa) or righteousness (birr).

“O mankind, indeed We have created you from male and female and made you peoples and tribes that you may know one another. Indeed, the most noble of you in the sight of Allāh is the most righteous of you. Indeed, Allāh is Knowing and Acquainted.”[3]

Islām, founded on individual and collective morality and responsibility, introduced a social revolution in the context in which it was revealed. Collective morality is expressed in the Qur’ān in such terms as equity, justice, fairness, brotherhood, mercy, compassion, solidarity and human autonomy. Leaders are responsible for the application of these principles and are accountable to God and man for their administration. The founding elements of the inner structure of Islamic social organisation, as prescribed by the Qur’ān and Sunnah, can be broadly categorised as freedom, equality and solidarity of mankind, through the lens of the all-important glorification and servitude towards the Creator. These elements, in turn, constitute the conceptual infrastructure for social justice in all spheres of human life. As a result, social justice is a concomitant of Islamic lifestyle.

“O you who have believed, be persistently standing firm in justice, witnesses for Allāh, even if it be against yourselves or parents and relatives. Whether one is rich or poor, Allāh is more worthy of both. So follow not [personal] inclination, lest you not be just. And if you distort [your testimony] or refuse [to give it], then indeed Allāh is ever, with what you do, Acquainted.”[4]

The prophet of Islām, Muḥammad (sall Allāhu ʿalayhi wa sallam), shook the underpinnings of the unjust society he lived in by bringing about social reforms. He forbade the exploitation of the vulnerable; protected the poor by establishing regular charity, and he crippled an arrogant class and race-based system by being the first human being to uphold the fundamental equality of all ethnicities. Welfare and social solidarity are the basis for the progress of a nation. The most important Islamic social ethics articulated in the Qur’ān are reinforced by his example and leadership in Madīnah, the first organised Muslim community and a model for the ideal implementation of Islamic social ethics.  He made Madīnah the highest centre of education and a citadel of moral values in spite of the dissent of wary tribes that were loose in morals.

According to Islamic conception, social justice, which is also referred to as economic justice or distributive justice includes three things: (1) fair and equitable distribution of wealth, (2) provision of basic necessities of life to the poor and the needy, and (3) protection of the weak against economic exploitation by the strong.

The Islamic civilisation pioneered the implementation of social welfare by establishing institutions to provide support to individuals at all levels of society in a trust system known as waqf.[6] There were institutions for the disabled, the blind and those in need who could find shelter, food and education. There were also institutions for mothers of young children. One of Salaḥuddin’s greatest acts of philanthropy was the establishment of two reservoirs by the gate of his fort in Damascus – one of milk and one of fresh drinking water for mothers to take freely. The Ottoman Empire, which observed Shariah Law, prioritised the benefit of collectives rather than individuals and emphasised justice over absolute “freedom”.

The influence of the social revolution brought about by the Prophet (sall Allāhu ʿalayhi wa sallam) is still alive and adopted by many others outside of Islām, and the Islamic fundamentals on social justice are still relevant. Questions, however, remain as to whether Muslims can come out of the mind-set of taking emotional refuge merely in past glories. This attitude may be a ‘feel good’ survival mechanism for individuals, but as a community this indulgence is a recipe for a continued downward spiral. Successful systems can draw sustenance and inspiration from the past, but only if there is the will to accept the challenge of the times to adjust and innovate.

It is time for a civil, thoughtful and fearless debate among intellectuals within the Muslim nation. No Muslim country appears to have the will and courage to introduce wide reforms to offer Islamic social justice as a better and a more realistic option for this ailing and widely polarised world. In so-called “religious” countries, “religion” is misused by rulers to serve their own ends, while in secular countries Islām is suppressed to blindly ape the West’s trauma with the Church. Perhaps, Muslims in Western democracies have the freedom and opportunity, denied to their counterparts in ‘Muslim’ countries, to meet the challenges ahead by initiating the much needed discourse of making Islamic ideals reality.  The world we live in is crying out for a qualitative change aimed at equity and justice. The earlier this process is initiated, the better for the Ummah and the world at large.

[2] Leonardo Boff in The Prayer of Saint Francis: A Message of Peace for the World Today (2001)