Right to pray throughout the day: framing your argument for a Muslim prayer room 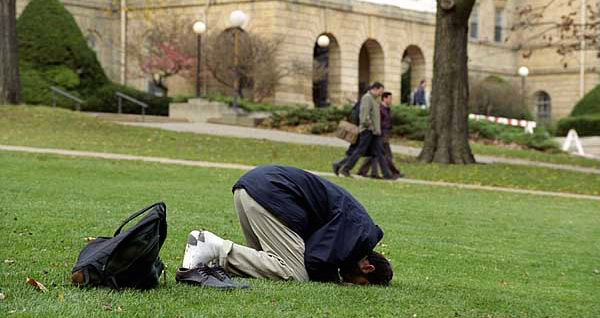 “But Muslims deserve a place to pray!”

But that was not what the motion was about.

The motion was about whether Muslims deserved their own prayer room as opposed to sharing a Multi-faith prayer room with members of other faiths.

But the brother who decided to speak on behalf of the brothers and sisters on campus did not understand this.

He had not read the motion properly, or even thought it through. Though he had assured me otherwise, it was clear he was unprepared. This was further made clear when he compared Muslims needing a prayer room to disabled people needing ramps or elevators in order to access buildings that were not wheelchair friendly – so now Islām is the equivalent to being disabled?

Just to make clear – the above incident was from many years ago, but why I thought it would make a good article is because, all too often, I have seen members of the Islamic societies on campus or Muslims at their workplace being thoroughly incapable of logically and convincingly presenting their arguments (be it for a prayer room or otherwise) to their peers and seniors.

It is the irony of ironies that the Qur’ān presents its message in the most unique and convincing manner, and yet, we have failed to internalise its inherent logic and rhetorical mastery.

I have therefore presented an example below of the points one can make when faced with the “why do Muslims need their own prayer room?” question. As such, if you are ever faced with a similar situation in your campus or workplace you can use this article as a template from which to voice your concerns.

It is by no means definitive. You can adapt any of the points below, or alternatively, if you have your own special pointers, share in the comments section below! I strongly believe in the redundancy of constantly reinventing the wheel. Many Islamic societies have faced similar problems and yet, they are all inventing their own solutions instead of looking to see what has been done in the past when similar issues have been raised, or what other Islamic societies have done when faced with similar problems.

Let us state the motion clearly and concisely.

Essentially, the motion states that Muslims should not have their own, separate, prayer room, but instead should share one facility, i.e. the Multi-faith room, with members of other faiths.

The motion does not argue that Muslims should not have any prayer facilities at all.

With that in mind, some important issues need to be clarified.

(1) The core Islamic worship obligations are very different to that found in other faiths.

Forming 22% of the student population at University X, Muslim students, as part of their faith, have to pray 5 times a day:

– Prayers are often performed in a (large) congregation.

– Two prayers are performed silently, while the other three are recited out loud.

– The times at which these prayers take place vary throughout the year.

(2) This is not an issue of equality but practicality.

Taking into consideration point (1), we now see that it would be practically impossible to direct Muslim students on campus to the Multi-faith room in order to perform their daily prayers. Whether it is an issue of there not being enough space, that Muslims will inevitably be the main (if not sole) users of the Multi-faith prayer room (as has been clearly evident in the past) or the varying, multiple prayer times making “booking” the Multi-faith room for sole usage by a specific faith group a logistical nightmare, it is clear that this is not a viable solution.

Have a Multi-faith room which can be used by members of all faiths and a separate prayer room for Muslim students on campus. If other faith groups feel that their specific needs warrant a separate prayer room, then that should be considered and addressed accordingly. A “one-size-fits-all” approach is clearly not appropriate in this situation, where you have a sizeable community on campus which has specific spiritual needs that need to be addressed and provided for. And this is something that other universities in London and across the UK acknowledge – each of whom have their own separate prayer rooms for Muslim students on campus.

There are only two mosques that are “near” X’s campus. To put into perspective how “near” these mosques are: if you are in the Engineering building at the X campus, door-to-door it will take you 15-20 minutes. And, of course, another 15-20 minutes on the way back. Add 5-10 minutes to pray and you have each prayer taking up to an hour. Considering that many Muslim students only have the break in between their lectures in order to pray, I hope you will begin to see how entirely unrealistic this proposal is.

It is also worth mentioning that each of these mosques are barely able to accommodate worshippers from the surrounding areas, let alone an additional 3-4000 Muslim students.

More importantly, we strongly feel that it is not the responsibility of the local mosques to take care of the needs of Muslim students studying at University X. It is the responsibility of the University and the Student Union. Both have done an excellent job at ensuring our intellectual, financial and spiritual needs are taken care of and addressed – we ask that, especially with regards to the latter, this continues.

(5) Is this promoting segregation?

With a separate prayer room on campus, at best, Muslim students like Mohammed or Fatimah, will be preoccupied with their prayers for around 20-25 minutes a day, depending on their timetable. For the rest of the day, whether it is in lecture theatres, in student societies or elsewhere, Muslim students are fully interacting with members of other faiths, or indeed those who do not share any faith. To say that 20-25 minutes out of potentially 7 hours of interaction with fellow students at University X is promoting segregation is an exaggeration that becomes more ludicrous the more you think about it. If anything, by taking care of the spiritual needs of Muslims on campus, integration, interaction and community spirit are being nourished.

(6) But we want to be inclusive of all faiths!

Then do so by addressing their specific needs. Specifically ignoring the needs of one group for the sake of the entire group is not only disingenuous (to date, no faith group has had an issue with Muslims having their own separate prayer room) but in fact serves to promote the complete opposite of inclusivity and is the first step towards breeding intolerance and division on campus.

In sum, the above is a simple template on how to approach the question of a specific Muslim prayer room, and how to present the argument in a logical and convincing manner. As Muslims, we should strive to be the people with the best speech, and this comes with thought, research and preparation. Turn up with a sound argument and, inshāAllāh, your voice will be heard.