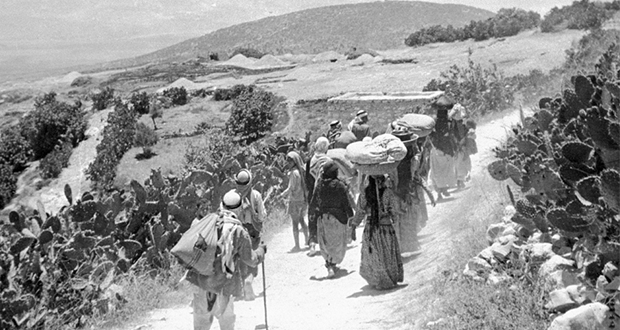 One after another, cities, towns and villages fell to the hands of troops and the city of Yafa, where we lived was amongst them. My father was forced to take us back to our old home in the town of Lod, but we only stayed there for two months, before Jewish troops came upon the city with deadly force.

Mohamed Ali Husni Hammuda rahimahu Allāh, was born in Lod, Palestine. At the age of 83 he described the events that decades ago changed his life forever. A journey that he and tens of thousands of Palestinians embarked upon, fleeing the lands they could once call home.

Mohamed could clearly recall the events that took place over half a century ago, a time when Palestine was home to Arabs and Jews who lived peacefully with one another. Yet he lived to see the land he loved usurped, causing it to erupt into a violent, bitter and bloody invasion that would last for many years to come.

When I was two years of age my father moved to the city of Yafa to work as a police officer. At that time the Palestinian people lived under the shadow of British rule. I was raised and nurtured in this beautiful coastal city, famed and loved for its vast orange groves, its azure Mediterranean Sea and its perfect warm weather.

In Yafa I completed my primary, secondary and high school education, and I achieved a diploma in Arabic literature. I wanted to continue my education. However, at that time there were no institutions for higher education in the whole of Palestine. My father wanted me to become a medical doctor so I enrolled in a school to study the sciences, in preparation for a medical degree in ‘Fu’ad the First’ Collage in Egypt, now known as Cairo University.

Mohammed travelled to Egypt, leaving home for the first time in his life, hoping to begin a career as a Doctor. However only a few months into his education, there was a sudden outbreak of cholera.

Hundreds of people died and all the schools were forced to shut down, so I returned to Yafa to wait until the situation in Egypt was under control. It was at this time, on the 29th of November 1947 that the United Nations resolved to tear the Land of Palestine in two, half for the Arabs and half for the Jews.

Mohamed felt that it was this critical decision that led to the enforced apartheid that would devastate the Middle East to this day.

The Palestinian people were forced to flee their homes in fear of killing, exile, destruction and the threat of persecution.

Mohamed and his family fled Yafa in 1948 to the city of Lod where they lived for two months before once again they found their city under attack.

We were sitting as a family having breakfast. My father had left for work. We heard a thunderous roll of tanks and armoured vehicles as they flooded the streets and suddenly the city was set ablaze with the sound of gunfire. People were killed where they sat and in the streets. Bodies were scattered everywhere.

The Jewish forces gathered all the young Arab men and detained them in the town square. I was amongst them. They held us there for hours before they took us all to the Grand Mosque of the city. They locked us all in for two days and two nights with no food or water. We weren’t allowed to go outside to relive ourselves so many of us were forced to go inside the Mosque.

After two days many of us were freed on condition that we leave the city. However, they kept some of us back in order to gather bodies from the streets. We were told to take the bodies and place them in large ditches. Then the bodies were covered with palm leaves and gasoline and set ablaze.

Mohamed’s voice struggled, as he painted the horrific pictures still vivid in his mind.

I wasn’t allowed to go back home. I wanted to be with my family again and to know if they were alive. One night I tried to sneak into my house without being seen, but a Jewish soldier caught me. He took me to the outskirts of town and at gunpoint, he watched as I began walking the long road to RamAllāh.

On the road I saw tens of thousands of Palestinian refugees carrying their children on their backs as well as what little worldly possessions they had left, fleeing Lod and the surrounding villages in fear of being put to the sword. On the way, there were Zionist soldiers who would order any passing Palestinian woman to remove any jewellery she was wearing and to surrender it to them.

It was a long and difficult journey. When I arrived in RamAllāh I was completely out of strength. I saw some men from RamAllāh carrying a large tank of water to give the thirsty travellers. When they came to me I drank so desperately that water was gushing from my nose. I managed to carry myself to the shade of a tree where I collapsed and slept until the next morning.

The next day I waited for hours as other travellers arrived, searching every face to find my family. Eventually I saw my mother in the distance staggering with every step. Surrounding her were my three younger sisters and my two brothers, but I could not see my father with them. None of us knew where he was.

Mohamed explained that after waiting for their father in RamAllāh for some time they eventually decided to travel to Gaza hoping to find him there. “It wasn’t until many years later that I met another man who also carried bodies to the fire that day, and he told me that he found my father near his house, shot in the back on his way to work.”

Many years passed and Mohamed got married to a lady from Yafa, the town that neighboured his own. He later decided to travel with her and with a few of their children to Kuwait to become a teacher and to nurture his family. His children went to study in England and after living through and surviving yet another invasion (the Iraqi invasion of Kuwait) Mohamed settled in a cosy home in Bristol. He wrote poetry about experiences and his longing to return to his birthplace (translation):

And differ with one another (falling) into darkness and gloom

Then (know that) tomorrow on your quarters will descend some youth

For the sake of their sacrifice they will see themselves cheap

Seeking only the greatest countenance from Allāh

And to Islām will return every part of this land

And its shining light will transcend every shooting star

In England we finally live in tranquility and peace. I still long to return to the land of my forefathers from which I was driven, but my hope of one day returning is slowly fading away with the passing of every year that the violence and injustice of humanity persists.

Sadly, Mohamed was not fated to see his homeland again. He passed away, by the grace of Allāh in December 2011 within a few weeks of this interview. He wished until his passing moments to see the oppression in Palestine end. His loss is felt by many who benefited from his wisdom, charisma and experience. His eloquent poetry is still recited and his beautiful works of calligraphy decorate the homes of many families, who love and miss him and will always remember him in their prayers.