1 million+ protest and pray in Chechnya against violence in Burma 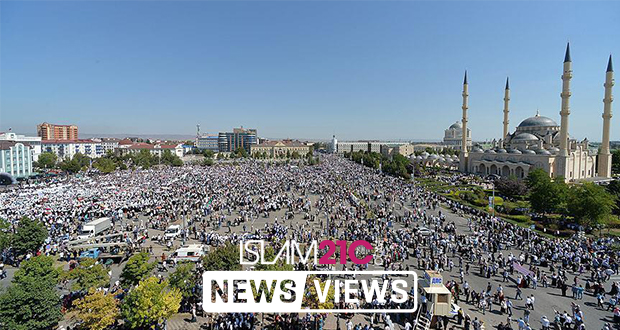 There has been an enormous gathering in Grozny, Chechnya’s capital, to protest the violence, killing and genocide committed by the Myanmar army and Buddhist extremists on the Rohingya Muslims. Russia’s Interior Ministry reported that over one million people gathered on Monday. [1] Chechnya is a federal subject of Russia, situated in the North Caucasus, it is one of the southern-most regions now under the control of Russia and borders Georgia to its European south.

It is worth noting that the current population of Chechnya now stands at approximately 1.3 million. Thousands of protestors are reported to have joined from the neighbouring regions.

Protesters carried signs and banners demanding an end to the killing of innocent people in Myanmar, which has seen years of prolonged violence from Buddhist extremists and the Myanmar army. Fuelling the fire are incitements from Buddhist monks who do not see the persecuted Rohingya Muslims as Human beings and thus resort to uncountable human rights violations.[2]

The protest ended with noon prayers at Grozny’s central mosque, also known as the Heart of Chechnya.