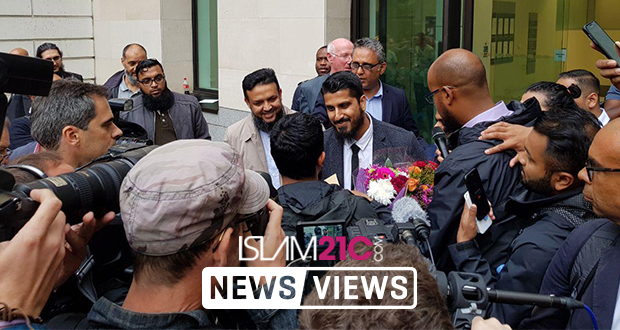 The Westminster magistrates court today handed down a £620 fine and a conditional discharge to Muhammad Rabbani, director of advocacy group CAGE, for refusing to hand over passwords protecting confidential information allegedly incriminating US agents allegedly involved in torture to obtain false testimony.

In what has been described as another embarrassing indictment of UK terror legislation, Rabbani was charged under anti-terror laws for not giving passwords protecting the information of a Muslim torture survivor seeking justice through CAGE. However, he was not given a prison sentence, despite putting himself at risk of one after refusing to give passwords for confidential information at a Schedule 7 stop at Heathrow Airport last year.

That anti-terror laws are used to convict people with no conceivable connection to actual terrorism is partly to blame for the increasing cynicism with which they are seen in the UK. Even the government’s anti-terror legislation watchdog, Max Hill, has repeatedly called for their scrapping.[1]

Since those who do actually engage in “terrorism” or related behaviour are predominantly charged and convicted under centuries-old legislation (which give more than enough powers to the state to bring suspected criminals to justice), anti-terror laws have increasingly been seen as a tool to frighten the public—particularly activists and dissenters—into acquiescence. [2]

“We have won the moral argument”

Rabbani gave the following remarks after the trial:

“I want to thank my lawyers and supporters who were here for me today. Of course the decision is not one that we had been hoping for, but the judge understood and expressed this case is complicated.

As the judge mentioned, “the importance of passwords and privacy cannot be overstated in the 21st century.”

Today’s judgement based on the judge’s and prosecution’s acceptance that I am of good character and worthy of belief, highlights the absurdity of the Schedule 7 law.

They accept that at no point was I under suspicion, and that ultimately this was a matter of having been profiled at a port. There are important implications for our collective privacy as s.7 acts as a digital strip search.

I took the decision to not raise the details of an important torture case before my arrest, and ultimately I have been convicted of protecting the confidentiality of my client.

If privacy and confidentiality are crimes, then the law stands condemned.

CAGE and I are glad we brought this case, and the result indicates that our only option is to change the law. Schedule 7 actively discriminates, and this will hopefully be the start of a number of legal challenges as more people take courage to come forward. We will be appealing this decision and we have won the moral argument.”[3]