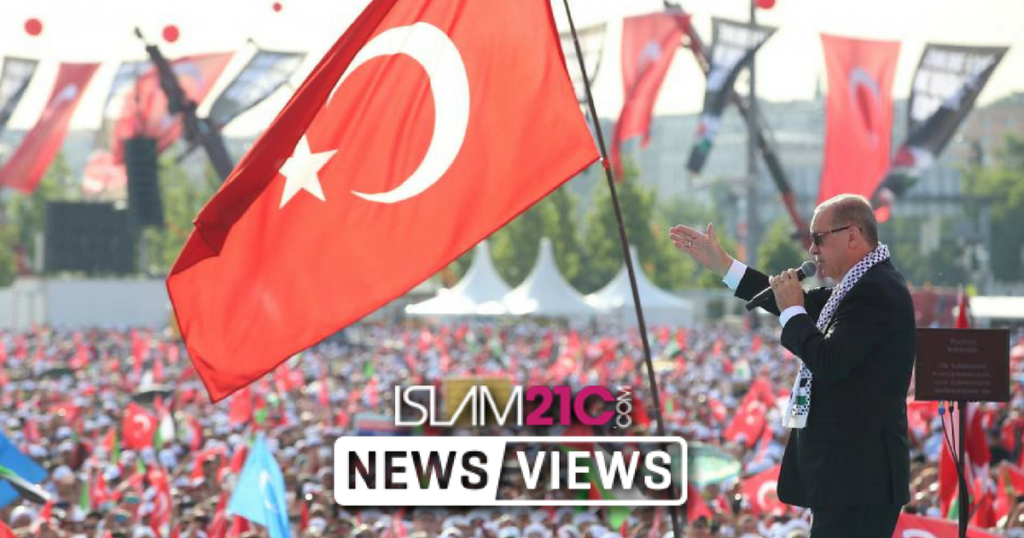 Speaking at an extraordinary meeting of the Organisation of Islamic Cooperation (OIC) Erdogan pressed the member nations to unite and confront Israel.

The OIC summit held in Istanbul this Friday, was called in response to the killing of over 60 civilian protestors by Israeli troops on the Gaza border.

The summit was attended by several heads of state, however notably Saudi Arabia, the UAE and Egypt sent only lower-level ministers.

Speaking in the session Erdogan said that:

“to take action for Palestinians massacred by Israeli bandits is to show the whole world that humanity is not dead.”

Following the killings, Turkey recalled its envoys to the United States and Israel.

“The Gaza Strip has been transformed into a large concentration camp …When their sons take arms they are called terrorists, and when they stage peaceful demonstrations, they are called extremists, and are shot dead with live ammunition.” [2]

Jordan’s King Abdullah II called for measures of support to aid the Palestinian resistance, while Iranian President Hassan Rouhani called for economic and political sanctions to be held against the US and Israel.

Earlier on Friday, Erdogan addressed a crowd of more than 10,000 people at a rally in Istanbul’s Yenikapi fairground.

He told his people that the Muslim world needed to unite and “pull themselves back together” in response to the latest killings. [3]

“Muslims are way too busy fighting and disagreeing with themselves, and shy away when confronted by their enemies… since 1947, Israel has been free to do what it likes in this region. They do whatever they feel like. But this reality can be undone … if we unite.”

The OIC meeting hosted by President Erdogan in Turkey’s largest city issued a final statement late on Friday, pressing the United Nations to launch a full investigation into Israel’s killings, as well as an international protection force for the Palestinians.

Erdogan called for the formation of an “international peacekeeping force” in order to help protect Palestinians from Israeli aggression. [4]

The IDF killing of 62 Palestinian demonstrators including five children occurred during demonstrations protesting the inflammatory relocation of the US embassy to Jerusalem. Israeli forces opened fire on the demonstrators resulting in the largest massacre of Palestinians since the 2014 war. The killings have since triggered a wave of international protests from Asia, through the Middle East to North Africa.

In response to Israel’s violence, the UN Human Rights Council has decided to dispatch investigators to the region.

The UNHRC passed a resolution to “urgently dispatch an independent, international commission of inquiry” to investigate potential war crimes by Israel.[5]

The vote was supported on Friday by 29, while Australia and the United States voted against, and 14 countries including the United Kingdom, Germany, Japan and Switzerland, abstained.

The inquiry commission will be expected to produce a final report next March.