Don’t blame Israel for killing children, it’s not their fault. 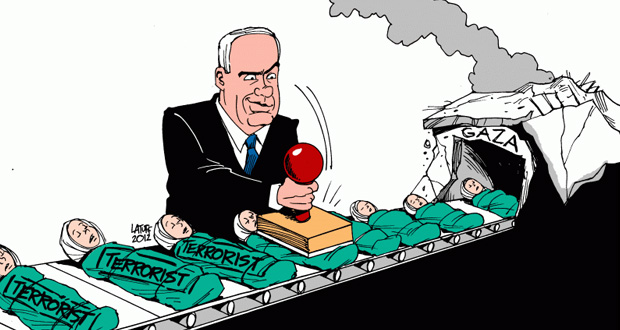 On Monday the Israeli military slaughtered 60 Palestinian civilians, injuring a further two and a half thousand. Israeli soldiers fired live ammunition and incendiary weapons into crowds of demonstrators, as they protested the ongoing blockade and provocative opening of a US embassy in Jerusalem. Amongst the victims, at least six children were killed and 200 wounded under direct fire. [1]

The bloodshed marked the greatest loss of innocent lives in Gaza since the 2014 Israeli onslaught on the overpopulated and starved strip of land, in which 2,220 people were killed, 547 of which were children, and a further 1,000 children permanently disabled from their wounds.[2]

As a matter of course, during and between every conflict, the Israeli military has up kept a briskly growing kill-count of children and civilians. Often the killings can only be described as targeted and deliberate attacks on child targets. One such example is the inexcusable incident in which a missile backed by advance targeting technology was launched by the Israeli navy killing four children playing football on the beach in 2014.[3] Drone footage before the killing clearly shows that the targets where children playing in a wide open area.

The horrendous crime of maiming and killing children has become synonymous with Israeli aggression, so much so that Watchlist (a coalition of leading human rights and humanitarian organisations) recently proposed blacklisting Israel for its constant ‘violence against children.’[4] Yet as the IDF continues to cement its trend of unchecked crimes against humanity, the pro-Israeli media has been hard at work, reassuring the world that Israel is in fact not to blame for its own actions.

Championed by an inarticulate statement from the White House, articles in a number of outlets including the Washington Post, The Jewish chronicle and others, have presented a unified media wave, declaring to the public that somehow it is Hamas who is to blame, for Israel’s killing of civilian targets including children.

In a White House press conference, Trump’s Press Secretary Raj Shah described the incident as a “gruesome and unfortunate propaganda attempt” orchestrated by Hamas. “The responsibility for these tragic deaths rests squarely with Hamas. Hamas is intentionally and cynically provoking this response,”[5] he added. However Shah offers no deeper explanation for this counter-intuitive stance.

In the Washington Post, Columnist Max Boot admits that “Yes, the confrontation between Palestinians and Israeli security forces occurred at the same time as the unveiling of the new U.S. Embassy in Jerusalem,” however, “it doesn’t mean that, if the embassy had stayed in Tel Aviv, peace and tranquillity would have prevailed in Gaza.”[6] Boot illuminates further writing that Hamas, being a “terrorist organisation”, “would not accept any U.S. Embassy anywhere in Israel, because it doesn’t accept the state of Israel.”6 Yet again, how the political stance of Hamas pulled the triggers of Israeli firearms pointed at children, Boot fails to explain.

Perhaps the most spectacular feat of mental gymnastics was performed by Daniel Sugarman, who initially disparaged the aggression of Israel. However upon coming to his senses Sugarman doubles-back and retracts his criticisms made in a flight of passion. His confessions are offered in a repentant article titled: “I said Israel should be ashamed – now I am the one who is ashamed.”[7] In the Jewish Chronicle Sugarman explains how he has come to understand that the IDF had no choice but to use lethal weapons as rubber bullets and water cannons are “only short range” and would have failed to deter the “tens of thousands of people rushing the border.” 7 Again, exactly how Hamas is to blame for bullets fired by Israeli weapons is a concept that is not adequately explained by Sugarman or any commentators.

These statements made by they endlessly creative pro-Israeli lobby are an example of what is known as victim blaming. For those who don’t know, Victim Blaming “occurs when the victim(s) of a crime or an accident is held responsible — in whole or in part — for the crimes that have been committed against them.”[8] To blame a victim for crimes committed against them is a particularly divisive form of oppression. For example: “Of course that woman was raped, look at how she was dressed.” If that inverted and corrupted logic disgusts you, then so should the relentless blame that is placed on the Palestinian people for their own rape and murder.

The fact of the matter is that victim blaming has long been the calling card of the Israeli media vanguard, and the pro Zionist lobby has the art of victim blaming down to a tee. In virtually every press statement made by the IDF following the killing of children of unarmed civilians, Israeli spokespeople claim that the victims of their violence are in fact to blame, as we hear the oft-recycled broken record slogan “Israel has the right to defend itself.” However time and time again we see that it is the Israeli military committing war crimes, breaking peace accords, mocking international law and conventions and firing the first shot, often against civilians.[9] Only Israeli lobbyists could possibly have the audacity to blame murder victims for their own deaths and with persistent dehumanising designations appended to the Palestinian people, this warped and cruel logic doesn’t even appear to raise any red flags in mainstream western media.

In reality the only sane premise for shifting the blame from Israel, is to realise that their military has never deviated from their stated aims – that is to say we’ve known all along that Israel has every intention of usurping the entirety of Palestine as well as a fair bit more. Israel values its expansion and dominance on the region and has never pretended to value civilian lives, or the lives of Arab children. If you really want to spare Israel the blame for its crimes, then look no further than the network of Arab nations implicitly giving their blessings as they develop knew relations with the ‘region’s only democracy’ turning a blind eye to the vanishing of the Palestinian people and the theft of the first qibla of Islam, Jerusalem.

So remember: Don’t blame Israel for killing children, it’s not their fault. No doubt they would have grown up to be terrorists right?[10]