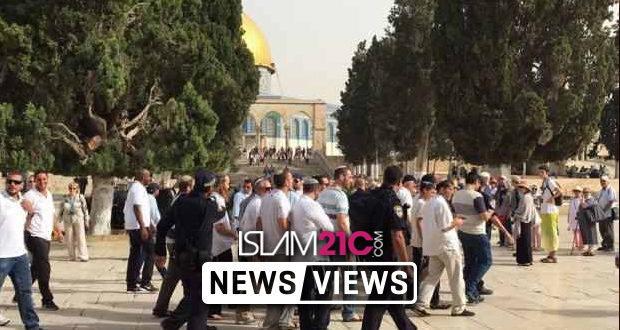 Extremist settlers invade Dome of the Rock for first time

On Sunday, in an unprecedented Zionist escalation, occupation forces began allowing extremist settlers to infiltrate the Masjid al-Aqsa compound up to and including the area directly surrounding the Dome of the Rock.[1]

Settlers stormed the compound throughout all of last week with the exception of Friday and Saturday. The daily intrusions usually take place twice; in the morning between 7:30am and 11:00am and in the afternoon between 1:00pm and 2:00pm. The extremists usually traverse specific trails along the green-domed Qibly Masjid then next to the Dome of the Rock. The new measures are seeing extremists enter the very precincts of the Dome of the Rock.

With regard to the escalation, the Department of Islamic Endowments stated that Zionist policemen allowed a group of extremist settlers to ascend to the precincts of the Dome of the Rock, in a move the department described as “unusual, provocative, deliberated and planned,” adding that the extremists were not put off by the vocal orders of the Masjid’s guards who tried relentlessly to prevent their entry.

The director of the department, Sheikh Azzam al-Khatib described the actions of the extremists as a “dangerous precedent”, confirming that a number of senior members of the Zionist police force directed the course of the extremists’ incursion, finally leading them to the roof of the Dome of the Rock and its immediate courtyard.

Al-Khatib added that the Jordanian government holds al Masjid al-Aqsa’s Islamic Endowment (Waqf), warning that further attempts by the occupation forces to change the status-quo at the Masjid “will be confronted, if necessary, by sacrifice on part the generality of the Palestinians,” and that whatever measures imposed by the occupation “will not affect the Palestinians’ resolve to fulfil their obligation towards al-Aqsa.”

This escalation coincides with the US administration indicating the high likelihood of recognising Jerusalem as the capital of the Zionist entity and relocating the US embassy from Tel Aviv to Jerusalem.[2] This will likely spark violence,[3] in all of occupied Palestine or a general Intifada and unified resistance to what has been internationally recognised as the illegal occupation of Jerusalem since 1967.

2017-12-04
+Editor
Previous: Ofsted & the Return of the Spanish Inquisition
Next: US supreme court rules in favour of Trump’s Muslim travel ban