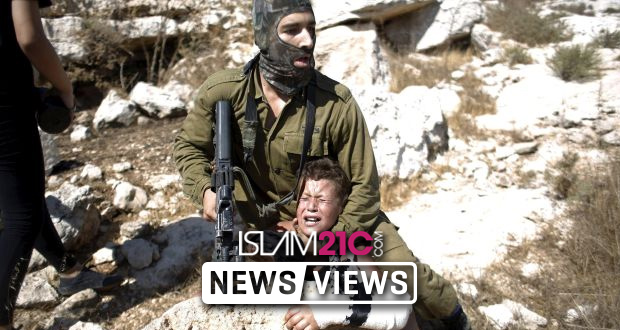 In 2016, the Obama administration finalised a $38 billion ‘military aid’ package to the Zionist regime, despite their atrocities against the indigenous Palestinian people. [1]

A year later, ten members from the House of Representatives of the United States Congress have proposed a bill to restrict certain types of US funding to the apartheid regime, based on human rights violation against Palestinian children.

The 11-page bill named ‘Promoting Human Rights by Ending Israeli Military Detention of Palestinian Children Act’ acknowledges the apartheid nature of the Zionist regime’s legal system, whereby a version of Civilian Law is applied to colonial settlers whilst the harsher military law is imposed on the native Palestinians of the occupied areas of West Bank.

The bill revealed that an estimated 10,000 Palestinian children have been detained and tried in military courts since the year 2000. These children are subjected to several hours of questioning during their arbitrary detention.

During their detention, children as young as 11 years old are subjected to “chokeholds, beatings and coercive interrogations” among many other forms of torture. [2]

The bill proposed in the 1st session of the 115th Congress makes it a requirement for the Secretary of State to certify that funds from the US Taxpayers over the previous fiscal year are not being used to detain Palestinian children. The funds may not be “used to support the military detention, interrogation, abuse, or ill-treatment of Palestinian children in violation of international humanitarian law.” [3]

The legislation – if enacted – would block funds to the Zionist regime if it is convicted of involvement in any of the following:

The bill has only been cosponsored by 10 members of the House of Representatives out of a possible 435. According to the United States’ legislative process, this bill needs to go through many stages, and cannot be voted on or even debated unless it is released by the committee that is assigned to study it.

The few politicians supporting the bill, such as Congresswoman Betty McCollum, have received opposition and online abuse as a result by some Zionists, who see the bill as protecting “terrorists” or children that would grow up to become “terrorists”.

Though the chances of enacting this bill to law seem slim, the bill is historic as such proposals have never previously been put through. [4]