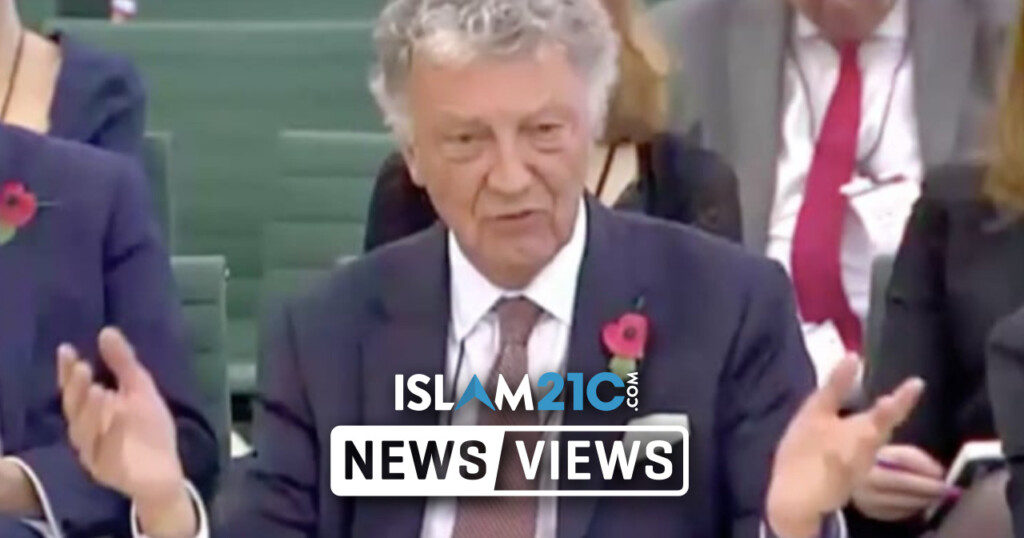 The Government appointment of William Shawcross as an independent reviewer of the widely discredited and toxic Prevent strategy has drawn strong criticism from Muslim groups and communities nationwide over his comments and stance on Islam.

“I am delighted to lead this important review to ensure that Britain has the most effective strategy possible for preventing people from becoming terrorists,”[1] Shawcross said following his appointment.

“As Independent Reviewer, I look forward to assessing how Prevent works, what impact it has, and what further can be done to safeguard individuals from all forms of terrorist influence. I look forward to hearing from a wide range of voices, particularly those who have had experience of Prevent in practice”, [1] he added.

The selection of Shawcross has been met with criticism and denouncement from an array of Muslim groups and representatives across the country, who have pointed to a long history of Islamophobia and anti-Muslim sentiment by the new head.

“It is ironic that a policy supposedly charged with preventing extremism is to be scrutinised by a person who holds hostile views on Islam and Muslims, who has links to people with extreme views on us, and who defends the worst excesses of the so-called ‘war on terror’”, a statement from the Muslim Council of Britain (MCB) said.

“Once again, the government is making it clear it has no interest in truly reviewing the policy. William Shawcross is singularly unfit to be a neutral and fair assessor of this government policy, which has been criticised for unfairly targeting British Muslims, given his frightening views about Islam and Muslims”, the MCB added.

Shawcross was the former chair of the Charity Commission – a government body that registers and regulates charities in the UK – from 2012 to 2018, and was Director of the Henry Jackson Society, a right-wing and neoconservative think tank.

As Director of the Henry Jackson Society in 2012, Shawcross was known to have stated that “Europe and Islam is one of the greatest, most terrifying problems of our future. I think all European countries have vastly, very quickly growing Islamic populations.”[2]

Under the leadership of Shawcross, the Charity Commission was accused of institutional racism against Muslim communities. The Commission also wrongfully accused Muslim charities of using donations to fund extremist groups.

The human rights and advocacy group CAGE says the appointment of Shawcross “demonstrates the government has given up on even pretending that it cares about integrity in Public Office”, adding that “Shawcross is embedded in a network of Islamophobia having been a former director of Islamophobic Henry Jackson Society.”

The Home Secretary Priti Patel chose Shawcross over the former Chief Crown Prosecutor Nazir Afzal, who pointed out in a statement on Twitter that The Telegraph had reported Shawcross as a favourite amongst ministers to lead the programme a week before the two candidates were interviewed.

“True, Home Sec chose William Shawcross as Independent Reviewer of Prevent over me. I was deemed Appointable by Independent Commission Telegraph said he’s Ministers “favoured candidate” week BEFORE we were interviewed by Ministers doesnt suggest a fair fight.”[3]

During the selection process, Afzal threatened to withdraw his application, arguing his candidacy was meant “to give public impression that it was open selection” [3] but noted that he did not go to the prestigious Eton College and was not good friends with ministers as was Shawcross.

In November 2020, The Telegraph published an article on Shawcross emerging as a frontrunner in the candidacy of Prevent’s independent reviewer, a week before the actual interview of him and Afzal took place.[4]

“Independence means a different thing to me, I’m not disheartened”, [3] the former Chief Crown Prosecutor said.

Dal Babu, a former senior Metropolitan Police chief, condemned the selection of Shawcross, noting that Shawcross “is a man who has demonstrated lack of independence in matters involving the Muslim community and sadly this is a missed opportunity to develop an effective [programme] that safeguards our children.” [2]

Prevent is one of the four stands of the government’s counter-terrorism strategy which is known as ‘Contest’. Unlike the other strands—which exist to deal with things related to actual terrorism—Prevent was created to combat “extremism”, which was defined as the opposition to “British values”. This was due to the misguided, ideologically-based belief—now rejected by the government—that something called “extremism” causes terrorism.[5] This underlying “radicalisation” theory still remains in Prevent vocabulary despite the government distancing itself from the refuted conveyor belt theory and the ERG22+ “extremism” risk factors that were once offered as justifications for the policy, before their “scientific” basis was condemned by 140 experts across the world off the back of a CAGE report exposing it as “pseudoscience”.[6] [7] [8]

Independent organisation PREVENT digest calls for Prevent to be suspended and reviewed, describing the “evidence” underlying it “…as flawed and racist as early attempts to classify criminals by head shape”.[10] It adds that Prevent stifles debate, as attested by the Home Affairs Select Committee.[11]

The United Nation special rapporteur on racism stated that, “The Prevent duty is inherently flawed, and expansion of a flawed program to cover more groups is by no means curative”.[12] This expresses that the targeting of Far-Right groups does not obfuscate the harm carried out by the Prevent strategy.

Figures published by the Home Office display an increase in Prevent referrals across the country, overwhelmingly targeting Muslims. 65% of the 7,631 referrals noted in the released figures refer to Muslims, despite being approximately 5% of the population. 56% of the total referrals were aged 20 or under, whilst a quarter of the referrals were of under-15s. Most of the referrals came from the Education sector, followed by the police.[13] [14]

Muslims comprise approximately 5% of the United Kingdom,[15] and less than 5% of the perpetrators of “successful and foiled” terror plots,[16] yet they are vastly overrepresented in the counter terrorism matrix—from Prevent referrals to Schedule 7 stops and searches to “terrorism” convictions. Not only does this lead to unjustified fear and panic from the broader population, but contributes to the alienation and disenfranchisement of many young or mentally vulnerable Muslims.[17]

This is one of the reasons that an increasing number of researchers and activists have been warning that Prevent is not just ineffective but actually counterproductive. A sense of alienation, disenfranchisement, experience of racist double standards, and so on, have long been significant empirically-determined causal factors involved in the likelihood of some people to be drawn into political violence and terrorism, emphatically not the non-violent beliefs and opinions—be they “radical” or not—that the Prevent programme has been focusing its attention on.

[15] According to the 2011 Census, Office for National Statistics.