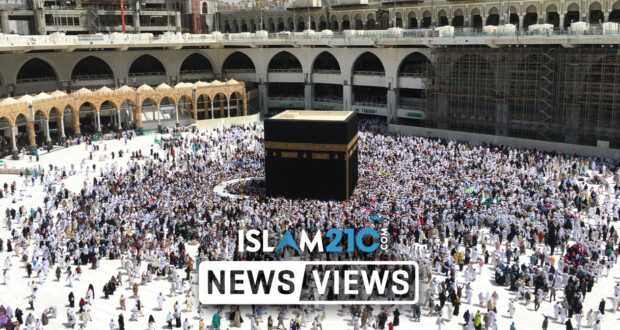 The Imam of Makkah, Abdul Rahman Al-Sudais, has raised eyebrows this week for a sermon he delivered in the Haram emphasising respect towards non-Muslims – whom many have interpreted as a case to normalise relations with Israel.[1]

In the sermon, Al-Sudais spoke of Islamic teachings on the respectful treatment of non-Muslims, and of Jews in particular. Stories from life of the Prophet Muhammad (sall Allāhu ‘alayhi wa sallam) were cited specifically, and how the Prophet’s kind actions towards a Jewish person later led to his conversion to Islam.

“The Prophet had mortgaged his shield to a Jew when he died. He had shared harvest from the land of the Jews of Khaybar among two. The excellence he showed to his Jewish neighbour led the latter to Islam.”

Other stories included the Prophet performing wudū’ from the bottle of a non-Muslim woman, as well as his creation of a peace agreement with the Jewish people living in the Khaybar region at the time.

Undoubtedly, the Prophet has set a good example for us in all matters of life, including the treatment of non-Muslims. However, it would be useful to point out that while the Prophet was friendly and respectful with his non-Muslim neighbours, he did not delay in their expulsion or evacuation when their treachery took place and after they broke their covenant with the Muslims.

Al-Sudais also urged worshippers to avoid “any misconceptions about correct beliefs in the heart coexisting with having healthy dealings in interpersonal exchanges and international relations.”[2]

The sermon by Al-Sudais comes after the recent UAE – a close ally of Saudi – signed a peace agreement with Israel, making it the third country in the region to normalise ties with Israel after Egypt in 1979 and Jordan in 1994. The deal has opened the door for other Muslim nations to follow suit, with murmurs that Saudi Arabia will be next to join the diplomatic party.[3]

The sermon by Al-Sudais has been met with widespread criticism on social media, causing a stir amongst some users, who have called the Sheikh a “traitor”, “hypocrite”, and “betraying the Palestinian cause”. While Al-Sudais prayed for Masjid Al-Aqsa at the end of his sermon, his stance was seen as contradictory by some.

“The contradictions of Al-Sudais from the captive occupation:

– God calls to save Masjid Al-Aqsa from the abomination of the aggressors, and to support the people of Gaza and grant them empowerment, and weep over the martyrdom of Ahmed Yassin.

– He justifies normalisation and dealing with Israel, citing prophetic narratives whose historical context does not match the current reality.”

The Mauritanian author Muhammad Al-Mukhtar Al-Shanqiti took to Twitter to accuse Al-Sudais of exploiting the podium of the Grand Mosque for political gain, acting as a prelude to normalise ties with Israel.

“Al-Sudais exploiting the forum of Al-Haram Al-Sharif to promote normalisation and to call for obedience to murderous rulers is new evidence that the future of Islam is in danger if the two sacred places continue to be in the hands of ungodly rulers and priests without conscience.”[4]

“He [Al-Sudais] is paving the way for normalisation and treason from the holy Meccan pulpit.”

“Al-Sudais, in his sermon on the importance of normalisation, proved to us that the shoes of Palestinian children may be cleaner than some beards…”

Others did not fail to mention the silence of Al-Sudais when the Qur’ān was being burnt only a week prior. Yet when the promotion of establishing deals with Israel was on the table, he reserved the sermon for this rhetoric to justify normalising ties with them

In related news, the Imam of Masjid Al-Haram in Makkah was also seen pictured with Shaykh Abdallah Bin Bayyah a few days ago. The latter had infamously signed a fatwa approving of the recent UAE-Israel deal. Bin Bayyah currently sits as the chairman of the Emirati Fatwa Council, which released a statement after news broke of the UAE-Israel deal saying:

“The Emirates Fatwa Council blesses the wise leadership’s acts for the supreme good for the nation and its people.”[5]

This is not the first time Al-Sudais has caused controversy. In 2017, he was criticised for glorifying Trump by saying in an interview that the US and Saudi Arabia were “steering the world to peace”.

Although Saudi Arabia does not have official diplomatic relations with Israel, Crown Prince Mohammed bin Salman previously pulled out of a scheduled visit to Washington DC to meet Israeli Prime Minister Benjamin Netanyahu after fearing of leaks of his whereabouts.

Saudi Arabia and its Crown Prince have been embroiled in several scandals, including the ongoing brutal war in Yemen and the murder of the prominent Saudi author and journalist Jamal Khashoggi (raḥimahu Allāh). The murder of Khashoggi prompted worldwide outrage and increased scrutiny of the Crown Prince, who denies being involved in the killing.

In recent times, Saudi authorities eased some restrictions, such as a decades-long ban on female drivers and public entertainment. In addition, a royal decree last year allowed Saudi women to travel abroad without a male guardian’s permission.

‘Umar ibn al-Khattab once asked Ziyad b. Hudayr, “Do you know what will demolish Islam?” Ziyad said, “No.” ‘Umar said: “Islam will be demolished by the faults of scholars, the arguments of hypocrites over the Book, and the judgment of misguided leaders.”[8]

Saudi Arabia has arguably downgraded its position in the heart of every Muslim with its recent policy changes and scandals by its “inspired and modern” regime. Misjudging and misapplying Islamic rulings and wisdoms when mentioning the life of the Prophet – by claiming that his treatment of the non-Muslim combatant and non-combatant was the same – have huge ramifications when speaking of the current treatment of the Palestinian people and their abhorrent mistreatment by the “Israeli” government, approved by the Gulf countries who publicly applaud for them.

It seems that this worrying development of the “dangerous” and “treacherous” words uttered on Friday – albeit without the explicit mention of names – shows that the Islamic capital of the world may need to be liberated before Al-Aqsa ever will be.