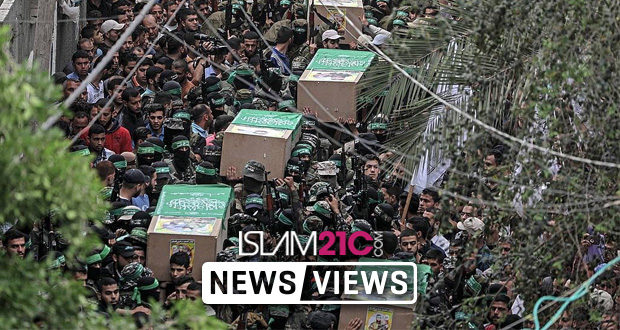 Six members of the Islamic Resistance Movement Hamas were killed and a further three injured in an explosion which took place yesterday. The incident occurred in the Az-Zawayda area of Deir el-Balah city, in central Gaza Strip.[1]

Ezzeddin al-Qassam Brigades, the military branch of Hamas, blamed the “Zionist enemy” for the incident which took place during the “complex security and intelligence operation”, however Israel has squarely denied any culpability.[2]

This explosion was followed today by an Israeli air raid on northern Gaza strip saying it was in retaliation for Palestinians setting fire to Israeli land.3 No fatalities have yet been recorded by the Palestinians.

According to Al Jazeera, in recent days Palestinian protestors have used flaming objects attached to kites to set fire to agricultural land over the Gaza border.[3] Yet, some commentators have pointed out the disproportionate use of Israeli force as only 15 fires have been caused by the kites as opposed to the devastation caused by an air raid.

Tensions in the region are high following weeks of peaceful protests along the Israeli-Gaza border which began on March 30th 2018 and have taken the lives of at least 47 unarmed Palestinian protestors and wounded more than 7,000 by Israeli fire.[4]

The “Great March of Return” movement demands the return of Palestinian homes occupied by “Israel” decades ago and will end on May 15, marking the 70th anniversary of the establishment of the state of “Israel”, or known to the Palestinians as “al-Nakba” which translates to “The Catastrophe”.