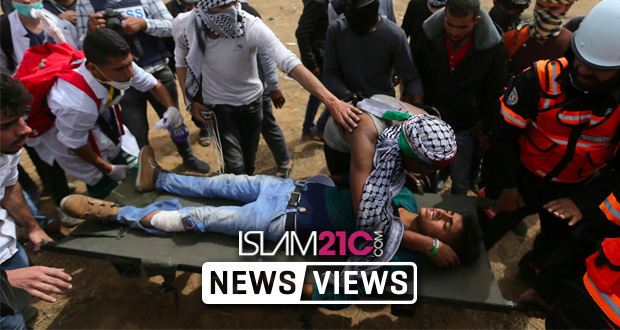 The Great March of Return protests in Gaza continued this Friday, with at least 41 murdered so far since the movement began six weeks ago, and a further 7,000 wounded as a result of Occupying Forces cowardly firing on unarmed protestors.[1] The weekly protests on the Gaza border are building up to 15 May when Palestinians mark the “Nakba”, reaching 70 years since they were forcibly removed from their lands by the Zionist entity.

At the time of writing, reports were not yet available on the latest number of causalities this week, although at least 13 were said to have been injured by live fire so far, according to the Gaza Health Ministry.[2]

Whilst aggression by Occupying Forces is as expected, and the deafening silence by Western leaders and blatant Western media bias comes as no surprise,[3] a new low appears to have been reached.

Reports have emerged about the artillery being used by Israeli forces against the demonstrators; a new “butterfly bullet” which explodes upon impact to devastating effect, is said to be amongst the live munitions in use against the Palestinian civilians.[4]

Since the protests began, 24 Palestinians have had to have limbs amputated, and all 24 have reportedly been shot by this new type of bullet. The spokesman for the Gazan Health Ministry is quoted explaining:

“All of their internal organs were totally destroyed, pulverized. Normally, a regular bullet breaks the leg [upon impact]. But these bullets create massive wounds, indicating that an explosion happened inside the body. It’s an expanding bullet. It pulverizes the leg, and the leg gets cut off.” [5]

Hospitals are struggling to cope with the sheer number of injured in need of urgent treatment each week, and additionally – how to treat these bullet wounds, which are described as “fist-sized”.[6] Relief work organisation, Médecins Sans Frontières (“MSF”, Doctors Without Borders) have also been taken aback by the injuries being sustained. The head of MSF in Palestine, Marie-Elisabeth Ingres, expressed her shock:

“Half of the more than 500 patients we have admitted in our clinics have injuries where the bullet has literally destroyed tissue after having pulverized the bone. These patients will need to have very complex surgical operations and most of them will have disabilities for life.” [7]

Such munitions are of course banned under international law, and despite independent evidence clearly suggesting their use, the IDF have denied their use.[8]

Amidst the reports and overwhelming evidence, Amnesty International called for governments worldwide to impose an arms embargo on the Zionist state in response to their aggressive and disproportionate use of force against the Palestinians. Magdalena Mughrabi, Deputy Regional Director for the Middle East and North Africa at Amnesty International was recently quoted saying:

“The nature of these injuries shows that Israeli soldiers are using high-velocity military weapons designed to cause maximum harm to Palestinian protesters that do not pose imminent threat to them. These apparently deliberate attempts to kill and maim are deeply disturbing, not to mention completely illegal. Some of these cases appear to amount to wilful killing, a grave breach of the Geneva Conventions and a war crime.”

“For weeks the world has watched in horror as Israeli snipers and other soldiers, in full-protective gear and behind the fence, have attacked Palestinian protesters with live ammunition and tear gas. Despite wide international condemnation, the Israeli army has not reversed its illegal orders to shoot unarmed protesters.”

“The time for symbolic statements of condemnation is now over. The international community must act concretely and stop the delivery of arms and military equipment to Israel. A failure to do so will continue to fuel serious human rights abuses against thousands of men, women and children suffering the consequences of life under Israel’s cruel blockade of Gaza. These people are merely protesting their unbearable conditions and demanding the right to return to their homes and towns in what is now Israel.”  [9]