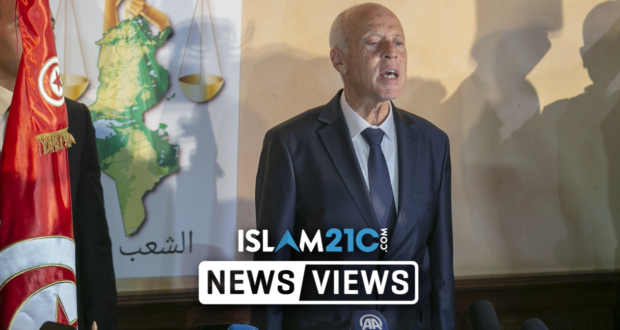 Tunisian independent candidate Kais Saied has secured more than 72% of votes in the presidential election held on Sunday, said an exit polls agency.

According to Amrod agency, business tycoon Nabil Karoui only secured 27.4% of the votes in the elections.

Tunisians headed to the polls to elect 217 new members of parliament, just a week before voting in a new president.

“We are entering a new stage in Tunisian history and we will take up all the challenges with our determination,” Saied said.

Saied went on to affirm that during his tenure, his country “will continue to abide by the international agreements and covenants.”

After assuming the office of president, Saied said, he will visit Algeria in his first foreign tour and wished to visit the war-torn Libya “soon”.

His victory speech came amid celebrations by thousands of Tunisians. Tunisians went to polling stations on Sunday to elect the country’s second elected president since the 2011 uprising.

Polling stations opened nationwide at 8am local time and were shut at 5pm. More than 7 million Tunisians were eligible to cast ballots in Sunday’s vote, according to the country’s electoral commission.