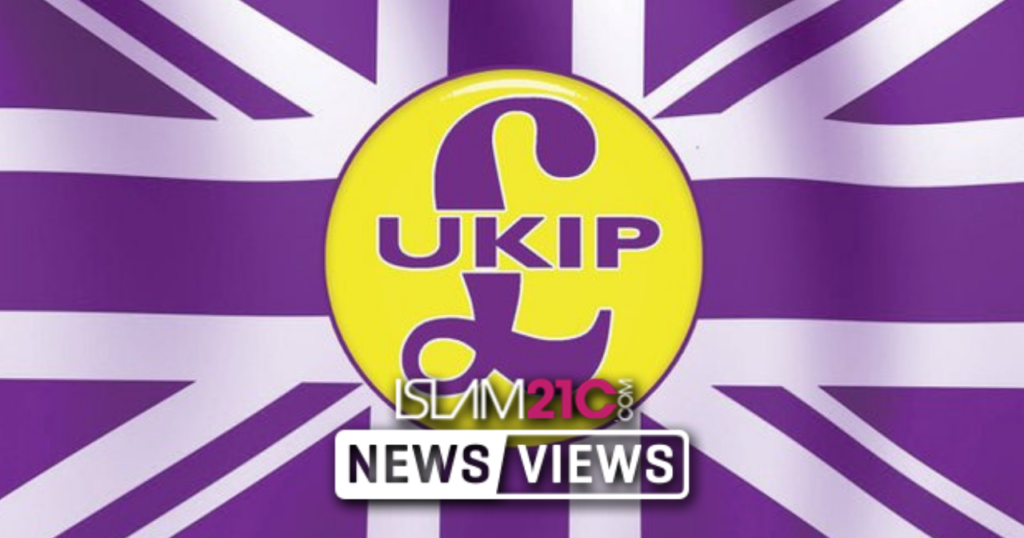 In a desperate bid for relevance, UKIP has stooped to new lows by calling for Muslim only prisons and special security scrutiny for potential immigrants from “Islamic countries”.[1]

In a UKIP policy document published at the party’s annual conference, calls were made for Muslims to be placed in special jails exclusively for adherents of the Islamic faith who “promote extremism or try to convert non-Islamic prisoners.” (The latter of which many simply call “dawah”.)

“Under a security-based screening policy we restrict any limited migration from Islamic countries to those people we can be sure, as far as possible, do not follow a literalist and extremist interpretation of Islam.”

The move to segregate Muslim prisoners is one step on a slippery slope to internment and the horrors which follow. In 1971, Operation Demetrius (which initiated internment) in Northern Ireland began. Internment was a key feature in the Northern Irish troubles and is regarded as a failure which only served to fan the flames.

The history of Gerrard Batten, leader of UKIP is also relevant. He has previously called Islam a “death cult” and made repugnant insults against the Prophet Muhammad (sall Allāhu ʿalayhi wa sallam). It is sobering to recall that in a mere matter of years, Batten has moved from, in David Cameron’s parlance, the “swivel eyed loons” wing of the party to become its leader.

The UKIP interim manifesto pledges to repeal the Equality Act which currently makes it illegal to discriminate on the grounds of race, religion, sex, gender, disability, sexual orientation or age. Furthermore, UKIP also has plans to abolish prosecutions for “hate crime” – although it is unclear if that means scrapping the laws or changing advice to the Crown Prosecution Service.[2]

The founder of UKIP, Nigel Farage, has also criticised UKIP’s lunge to the far-right and warned it faces “total and utter marginalisation.”[3] Although Batten was quick to point out the hypocrisy, stating that Farage had spoken on platforms with Alternative für Deutschland – who sit in the same political family as France’s National Front.[4]

UKIP is also considering allowing Tommy Robinson into the party, to purportedly form a far- right UKIP-EDL alliance. Although the party rules currently prevent former EDL members from joining it appears that Robinson may, in fact, be allowed to become a member prompting concerns amongst more ‘moderate’ UKIP members of far-right entryism.

UKIP may not win any seats if a general election were to be called soon. However, polling at 6-7%,[5] their odious policies, especially in marginal seats, may be slightly watered down and utilised by mainstream parties. Let alone, the credence it provides to the growing threat of far-right extremism and the alliances that are being forged.

This worrying trend of an increasing threat from white supremacist terrorism has manifested in a rise in prisoners holding such views. The Home Office said:

“The proportion of prisoners holding far-right ideologies has increased steadily over the past three years, with the number up from 10 to 28 in the latest year.”

This followed the wave of arrests after neo-Nazi group National Front became a proscribed organisation in 2016 after the murder of Jo Cox MP and the numbers continue to steadily rise. Be it Gerrard Batten, Tommy Robinson or indeed Geert Wilders, anyone with a public platform should think carefully before fanning the flames of white supremacist terrorism and anti-Muslim hate.