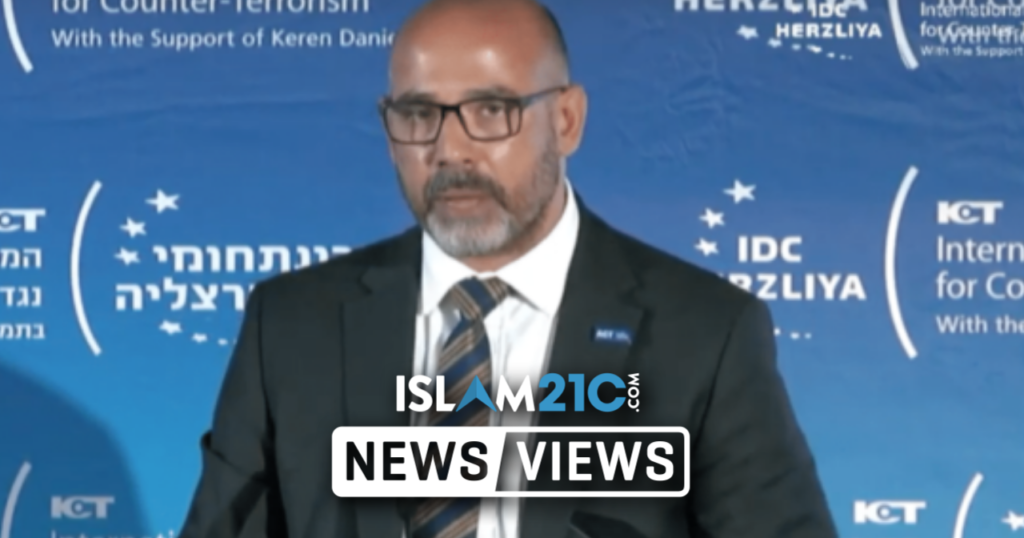 The head of counter terror policing in the Met Police, Assistant Commissioner Neil Basu has faced criticism for damaging the credibility of the Police by promoting the racist and Islamophobic Prevent programme. [1]

Neil Basu demonstrated this deeply problematic understanding of the causes behind violence whilst speaking at a conference in ‘Israel’.

During his speech, Basu urged Lord Carlile, the newly appointed ‘Independent’ reviewer of Prevent, to ignore ‘malign detractors’ and instead only engage with ‘critical friends’.

In fact, the supposed ‘Independent’ reviewer is on record saying he is biased towards the strategy. Human rights groups have argued that in doing so he is undermining his position as he told parliament he was ‘somewhat biased’ towards the toxic strategy. [2]

In early August, a group of 10 human rights organisations and community groups, including the MCB, Liberty, and the Index on Censorship, wrote a joint letter to security minister Brandon Lewis condemning the Government for appointing Lord Carlile without public consultation. The group accused the Government of “shrouding the process in secrecy” and making the appointment behind closed doors. [3]

In the joint letter the group said:

“In combination, these omissions do not inspire confidence that the government is seeking to appoint a reviewer with the expertise and independence required to thoroughly scrutinise the logic, remit and impact of Prevent,”

In response to the remarks made by Neil Basu in ‘Israel’, advocacy group CAGE have said that his comments are “a clear indication that the review is nothing more than a shallow rebranding exercise to bolster the toxic policy.”

“Neil Basu fails to acknowledge the growing body of research that establish that the causes of violence are rooted in unethical foreign policies, support for despots and hostile domestic laws which target and isolate minorities. PREVENT addresses none of this, it rather perpetuates them.”

“It is ironic that Basu speaks about PREVENT and countering terrorism in Israel, a country condemned by the UN for its policies of violence against civilian Palestinian populations and is the amongst the biggest arms dealers for India, which is engaged in its own violent campaign against a civilian population in Kashmir.”

Many groups have criticised, opposed, and called for the repeal of the Prevent strategy. These groups include the National Union of Students (NUS), Federation of Student Islamic Societies (FOSIS), University and College Union (UCU), National Union of Teachers (NUT), several faith groups, academics, and activists. [4]

Muslims comprise approximately 5% of the United Kingdom [8] and less than 5% of the perpetrators of “successful and foiled” terror plots, [9] yet they are vastly overrepresented in the counter-terrorism matrix — from Prevent referrals to Schedule 7 stops and searches to “terrorism” convictions. Not only does this lead to unjustified fear and panic from the broader population, it also contributes to the alienation and disenfranchisement of many young or mentally vulnerable Muslims. [10]

This is one of the reasons that an increasing number of researchers and activists have been warning that Prevent is not just ineffective but actually counterproductive. A sense of alienation, disenfranchisement, and experience of racist double standards have long been significantly empirical causal factors involved in the likelihood of some people to be drawn into political violence and terrorism, and emphatically not the non-violent beliefs and opinions — whether ‘radical’ or not — that the Prevent programme has been focusing its attention on. [11]

[8] According to the 2011 Census, Office for National Statistics.