US launches missile strike in response to Assad’s chemical attack 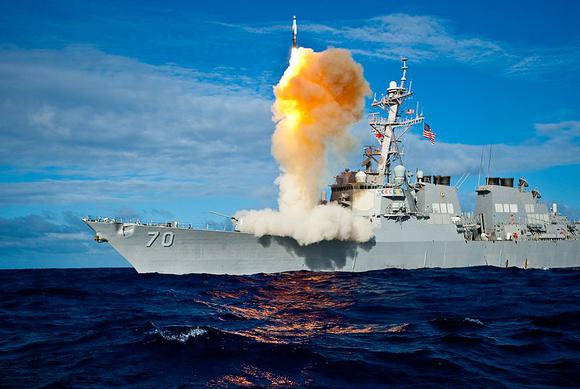 The United States has fired 59 Tomahawk cruise missiles at a Syrian airbase controlled by the Assad Regime.

This is the first direct military strike the US has taken against Syrian President Bashar al-Assad’s forces in the six-year war.

The motive was confirmed to be in retaliation for what the Trump administration believes was a series of chemical weapons attacks killing innocent Syrian civilians.

Trump’s response comes just 18 days after the Trump administration were caught bombing a mosque in Syria used by civilians  and then targeted the people as they were running away. And just 14 days after the UK-based Syrian Observatory for Human Rights said that the US-led coalition carried out yet another bombing of a civilian school killing at least 33 people.

The Pentagon confirms the hit at 4.40am local time this morning on Shayrat airfield in Homs province, from where they believe the Syrian jets that dropped the chemicals on a rebel-held town in Idlib province had taken off.

Syrian state TV also reported a US missile attack on a number of military targets, calling it an “act of aggression”, while Homs Governor Talal Barazi said the US strike will not affect the Syrian government or its ability to fight “terrorists”.

The UK-based Syrian Observatory for Human Rights said at least four soldiers were killed and dozens wounded, while the airbase was almost destroyed.

“There can be no dispute that Syria used banned chemical weapons, violated its obligations under the chemical weapons convention and ignored the urging of the UN Security Council,” Trump said.

Syria’s opposition National Coalition hailed the US strike, saying it puts an end to an age of “impunity” and should be just the beginning.

The US said initial indications were that the missiles had severely damaged or destroyed Syrian aircraft and support infrastructure and equipment at the airfield.

At least 86 people, including 27 children, were killed after a suspected poison gas attack on the rebel-held town of Khan Sheikhoun in Idlib province on Tuesday, according to the UK-based Syrian Observatory for Human Rights.

The attack drew widespread international condemnation and public revulsion, prompting the United Nations to pledge it would investigate it as a possible war crime.

The Pentagon said that Russia, which has been bombing rebel-held areas in Syria since 2015, had been notified ahead of the operation – but US Secretary of State Rex Tillerson said that Washington had “sought no approval from Moscow”.

Earlier on Thursday, Russia’s deputy ambassador to the United Nations warned of “negative consequences” if the US took military action against Syria.

“All responsibility, if military action occurred, will be on shoulders of those who initiated such doubtful and tragic enterprise,” Vladimir Soronkov told reporters in response to questions about possible US strikes.

Turkey said samples from victims of the attack indicate they were exposed to sarin, a highly toxic nerve agent.

“I think what happened in Syria is a disgrace to humanity and he [President Bashar al-Assad] is there, and I guess he’s running things, so something should happen,” Trump had told reporters earlier on Thursday.

Christopher Swift, professor of national security studies at Georgetown University, said the most important question was whether the Trump administration’s vision in launching the strikes was “an impulsive one or a strategic one”.

“It’s not clear to me, yet, whether this administration has thought through the implications of the actions they took this evening,”

“If the president has a plan, then it will be interesting to see how that plan comes through. But if he doesn’t, he may have done more harm than good.”

Trump said the strike on Syria was in the “vital national security interest” of the US.