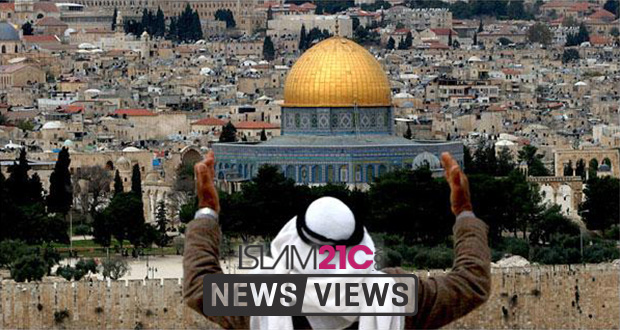 Following the recent alleged shooting by three Palestinian men from 1948 occupied Umm al-Fahm, northern Palestine, al-Aqsa Masjid was closed for worshippers on the 14th of July, 2017, the first time since 1969. Since then, Israeli Occupational Forces have restricted access to the Masjid, except through unprecedented, electronic security gates. Muslim Scholars and activists worldwide have refused to enter Masjid al-Aqsa through these fences, choosing to rally outside of the Masjid and perform all prayers in the surrounding vicinity. But should Palestinians just ‘comply’ and surrender to the new status quo? Here are 10 reasons why electronic gates around al-Aqsa are utterly rejected.

1) It gives Israeli Occupational Forces, despite their illegal presence inside Eastern Jerusalem and the Old City, total control of who and why Muslims are accessing Masjid al-Aqsa. Imagine someone from across the world, armed with an M16, erected a magnetic scanner on the door of your home or Masjid, with a track record of shooting your own visitors.

2) The gates directly fuel attempts to occupy and ‘Judaise’ the Holy Land and Masjid al-Aqsa, subjugating Muslims and emptying Masjid al-Aqsa from worshippers and visitors, allowing immediate implementation of apartheid policies stemming from the Knesset.

3) They give Israeli Occupational Forces full control over who enters Masjid al-Aqsa and the precise number of those inside as well as their identities. Restrictions for under 50s have already been put in place, whilst any Muslim deemed an unwanted ‘guest’, will simply be told to stay outside.

4) They give Israeli Occupational Forces the ability to split Jerusalem and access to the Masjid into specified periods and locations. Such an endeavour can only be facilitated through ‘intelligent’ or computerised analysis of people’s movements.

5) They fulfil the Occupational Forces’ wish to treat the illegal incursions by Israelis the same as the historic right of Muslim access to the Masjid. Electronic gates are the most practical way of achieving this. They further facilitate more regular intrusions into the Masjid by extremist groups and the carrying out of whatever Talmudic traditions as a precursor to building the alleged ‘Temple Mount’ as part of an apocalyptic doomsday ideology.

6) They allow the Occupational Forces to conjure in the psychology of Muslims around the world that it is in complete control of al-Masjid al-Aqsa, barring Muslims from visiting. Such ‘psychological’ occupation seeks to hamper Muslims from around the globe from striving to visit one of Islam’s greatest Masājid, seeing as they will be granted only ‘electronic access’ if any at all. It is worth mentioning here that this has not hampered visits, with visitors joining their brothers and sisters in solidarity at the outer vicinity. It seems the Turks are leading on this front as per the usual.

7) The electronic gates seek to humiliate those who wish to access the Masjid by making them wait in long queues for many hours and in difficult circumstances. Those who have been to al-Aqsa know of the narrow access ways to the courtyard without there being queues or humiliating bodily search routines.

8) The electronic gates impose a new ‘status quo’ on al-Masjid al-Aqsa, the acceptance of which will normalise future illegal “security measures”, until access to the Masjid is routinely hampered, randomly restricted and occasionally blocked altogether.

9) The electronic gates will facilitate systematic access to extremist Jewish groups during ‘festivities’ as well as politicians and security forces who in the absence of Palestinian guards may desecrate the holy sites unchallenged, install endless surveillance and have access to the built Masjid within the courtyard.

10) The electronic gates will allow the constant presence of armed occupational soldiers who have recurrently fired live munitions at unarmed Palestinians who are then accused of being ‘attackers’. Many such have been found to be unarmed Palestinian worshippers who wish not to comply with the humiliating security measures.

More than 300 Palestinians have been killed in and around Masjid al-Aqsa since 2015, allegedly for trying to “attack” illegally-stationed occupational “soldiers”.[1] According to Sir Gerald Kaufman MP, more than half of such allegations “were definitely fabricated”, whilst recently two Jewish Israelis and an Eritrean have even been killed “because they looked Arab”.[2]

In the last few hours, protests have erupted around the vicinity of al-Aqsa, and scores have been injured with live ammunition. There are reports of a number of killed whom we ask Allāh to accept as Shuhadā. The Ummah’s resurgence may trigger a third Intifada, and the whole of the Muslim world has a share of responsibility towards giving victory to al-Aqsa, be it through our political activism, writing, speaking, teaching or visiting, according to each and every person’s capability.