94 years after its abolishment, are the Turkish people reviving the Ottoman caliphate? 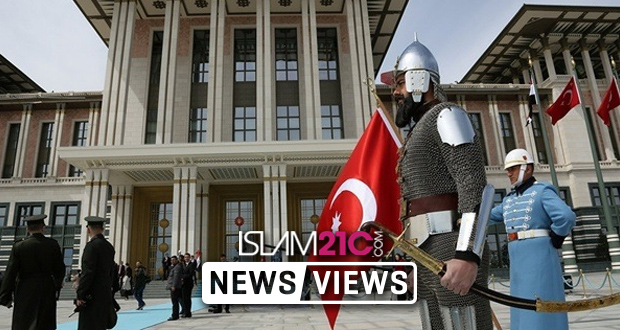 Yesterday marked 94 years since the abolishment of the Ottoman Caliphate on 3rd March 1924 CE. [1] The caliphate has played a significant role throughout the history of Islam and its destruction is arguably one of the darkest eras in Islamic history following the death of Prophet Muhammad (sall Allāhu ʿalayhi wa sallam). [2]

Its history comprises of hundreds of years of enormous territorial expansion, economic growth and academic development. The caliphate, or better known as the Khilāfah in Arabic is the position of authority and representation which is given to a selected individual over the Muslim Nation following the final prophet Muhammad (sall Allāhu ʿalayhi wa sallam).

“The Children of Israel used to be ruled and guided by prophets; whenever a prophet died, another would take over his place. There will be no prophet after me, but there will be Caliphs who will increase in number.” The people asked, “O Allah’s Messenger (sall Allāhu ʿalayhi wa sallam)! What do you order us (to do)?” He said, “Obey the one who will be given the pledge of allegiance first. Fulfil their rights, for Allah will ask them about (any shortcoming) in ruling those Allah has put under their guardianship.” [3]

The responsibility of the Caliph was to act as the representative of Muslims, acting according to and ruling by Divine law (Shariah) in totality, establishing prayer, collecting obligatory alms (zakāt), and conveying the message of Islām to the entire world. [4]

Turkey today has witnessed drastic changes ever since the abolishment of the caliphate and the rise of the Zionist-sponsored, secularist Mustafa Kemal “Atatürk”. [5] “Atatürk” came to power imposing decades of secularism on the Turkish people. Turkey endured a staunchly secularised political climate for a number of years but is currently undergoing a remarkable transitional period, in which it is removing itself of the tyranny that suffocated it.

In February, the Turkish president Recep Tayyip Erdoğan commented that Turkey should reconsider criminalising adultery and bringing back the ‘adultery law’. During a weekly parliamentary group meeting in Ankara, Erdoğan stated,

Earlier in February, Erdoğan also said that the Republic of Turkey is a continuation of the Ottoman Empire. During a memorial ceremony to mark the anniversary of the death of Ottoman Sultan Abdulhamid II, Erdoğan stated,

Abdullāh b. Salām (May Allah be pleased with him) reported:

Charity is one of the most essential manifestations of any Islamic country. The above is the founding statement of the Prophetic Islamic state, which presents the great emphasis and direct command the Prophet of Allah made to the Muslims with regards to humanitarianism and charity.

Share. Facebook Twitter LinkedIn Email Telegram WhatsApp
Previous ArticleIs it time for Ofsted to be put into special measures?
Next Article Will the Oscars care about Syrian women in Assad’s prisons crying #MeToo?