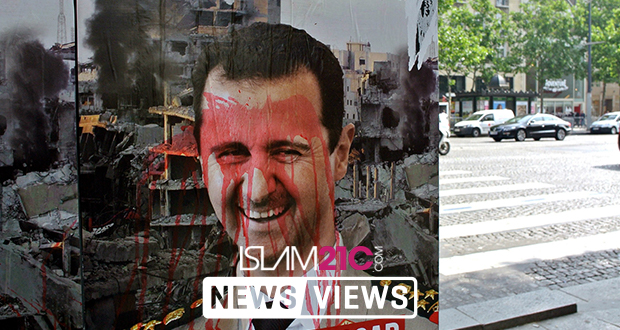 During an interview with Syrian News Channel known as Alikhbaria Syria, Issam Zahruddin a top Syrian commander made some shocking remarks. Zahruddin is a Major General of the elite Presidential Republican Guard of Bashar Al-Assad in the city of Deir al-Zour.

The interview which took place on state television – after the regime regained control of Deir al-Zour military airport – had Zahruddin threatening to kill anyone who decided to return to Syria after fleeing the on-going conflict.

“To those who fled Syria to another country, I beg you don’t ever return, because even if the government forgives you, we will never forgive or forget,”

“If you know what is good for you, none of you return”

Zahruddin is a well-known commander among supporters of Assad, and has played a major role in the Syrian Civil War and presently in Syria’s Deir al-Zour Province.

Zahruddin has also previously appeared in several photographs with severely mutilated and tortured bodies. Since Sunday, dozens of civilians have been killed by Assad’s forces with the direct support of Russian forces on air and on the ground. Numerous reported Russian airstrikes have resulted in the deaths of several civilians in the region.

The interview which was circulated widely on the internet infuriated many Syrians. Currently Syrian refugees have fled to Turkey, Lebanon, Jordan, Egypt and even Iraq amounting to around 5 million people, among others who have fled elsewhere. With a further 6.3 million Syrians internally displaced within the country.

The current on-going fierce conflict has resulted in the worst humanitarian crisis of our time. With estimates showing that half the country’s population have either been killed or forced to become refugees.

US and Russian forces have been instrumental in assisting the Syrian Regime recapture territory previously under rebel control. The resulting refugee crisis, and the regime’s unwillingness to rehouse the thousands fleeing the bombardment, promising them of ‘death’ should they return, has forced thousands to seek refuge in neighbouring countries and towards Europe.