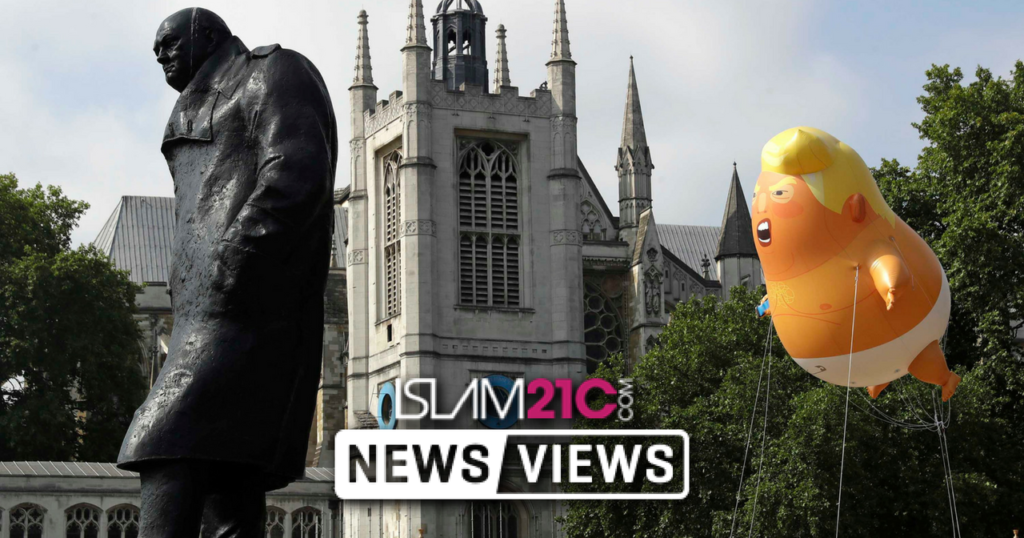 The anti-Trump demonstration in London on Friday, where around 250,000 demonstrators gathered, was remarkable indeed. Adding colour to the affair was the huge ‘Baby Trump’ protest balloon – a giant, orange inflatable the size of a two-storey house, which floated above Westminster. It was deemed to be a moment of weaponised humour in a broad, colourful and beautiful protest movement. It became one of the prime weapons of choice of the people who converged that day to protest against the visit of a demagogue, racist and a narcissist POTUS, to the UK. The cowardice of Trump entourage was however apparent, as his UK itinerary appears to have been planned out carefully to avoid the capital, the ‘Baby Trump’ and the London demonstrations as much as possible. Max Wakefield discusses the underlying rationale for flying the balloon, he states:[1]

‘..With his malevolent face of undisguised rage, enormous yellow quiff, securely fastened nappy – and really tiny hands – Trump Baby symbolises the essential facts about The Donald. A man of willful and breathtaking ignorance, he wanders in the self-reflecting hall of mirrors of a terrible infant’s psyche, blinded by his own brilliance. Bereft of morality, but rich in privilege, his crazed and cowardly self-love whimsically whips, taunts and abuses anyone it can lay its (tiny) hands on, concocting lies, hatred and violent group-think to feed the beast…This is the inner life of the most powerful man on earth. Now, when Trump visits the UK he will be greeted with this grotesque, floating and unavoidable vision of himself as viewed from the outside. And he will be pursued out of the country by our echoing laughter…’

Campaigners have reportedly raised more than £16,000 to pay for the six-metre inflatable, and thousands signed a petition requesting it be allowed to fly. It was the Balloon campaign co-organiser Matthew Butcher, describing himself as one of the ‘Trump babysitters’, who said the caricature acts as a ‘mirror’ to the president- a thin-skinned, over-inflated, mobile phone-holding baby, highlighting his ‘infantile’ approach to politics.

“People see it and they know what it’s getting at. It’s bringing to light his infantile way of doing politics and the dangers behind his politics. There’s a toddler-in-chief in charge at the White House and the real-life effects of those politics is pretty devastating”.[2]

Overlooking this massive public enthusiasm, the UK’s much powerful Islamophobia lobby and the biased sections of the Media however attempted to make use of this opportunity to dilute its significance by paint-brushing the ‘balloon and the protests’ with a dash of Islamophobia tar, in order to fan the flames of controversy. Nigel Farage, who recently even defended Trump retweeting Britain First anti-Muslim videos and also labelled Labour’s Chuka Umunna of being “anti-American” for labelling Trump, a “racist, misogynistic Islamophobe”, described the blimp as the ‘biggest ever insult to a sitting president’. The Islamophobia lobby thus turned their focus on the Muslim Mayor of London, Sadiq Khan, blaming him for taking the decision.

In fact, Piers Morgan, widely considered a Trump stooge whose farcical interview with Trump some-time ago was well known, interviewed Khan on the Good Morning Britain show. The main talking point was Trump’s visit and Khan’s vocal criticism of the President. The balloon appeared to have ruffled Piers’ feathers; despite Sadiq Khan clearly stating that it was the Greater London Authority which approved the balloon to fly for a few hours and that he had no reason to act as the censor, adding ‘can you imagine if we limited freedom of speech because somebody’s feelings might be hurt?’ Piers kept on his harangue of heaping blame on Khan. Interestingly, during the interview, Piers shockingly asked whether he, being a Muslim, would like a balloon sent up depicting him as a pig.

There was another addition to this balloon drama. Michael Fabricant, the MP for Lichfield, tweeted the “offensive, highly inappropriate and racist” cartoon that showed the pig engaged in a sexual act with another pig. It appears alongside an image of the US president Donald Trump, with the comment: “Breaking news: Trump defeats Sadiq Khan in balloon wars”.

Although he later deleted the tweet, the damage was done. Responding to criticism from the senior Tory Sayeeda Warsi, who reposted a tweet which said “Islamophobia isn’t funny”, Mr Fabricant replied: “Sayeeda – the picture is vile. As soon as I saw what it was, I deleted it. I’m liberal and not anybody-phobic’. As Independent UK reported; ‘Responding to the image Afzal Khan, the shadow immigration minister, said:

“The Tories have ignored countless calls for an inquiry into Islamophobia in their party from their own members, the former chair of the party and the Muslim Council of Britain. Clearly there’s a problem, and if Brandon Lewis’s respect meant anything, Michael Fabricant would be suspended”.

The Labour MP, Wes Streeting, added that he had written to the government’s chief whip requesting action be taken against the Tory MP for “his offensive, highly inappropriate and racist” post on social media. “I’m sick of the mayor’s religion being used a punchline and punch bag by racists and bigots,” he added. “MPs should know better.”[3]

This sadly reminds of the Islamophobic London Mayoral campaign of Tory Zac Goldsmith in 2016 when he painted Labour’s Sadiq Khan as a closet extremist and repeatedly questioned Khan’s judgement in associating with alleged extremists before he became an MP. Zac was then criticised for an article in the Mail illustrated with a picture from the 7th July 2005 bombings and headlined:

“Are we really going to hand the world’s greatest city to a Labour party that thinks terrorists are its friends?”

Not surprisingly, Trump in an interview with the Sun, UK blamed Khan for doing a “very bad job on terrorism” by allowing so many migrants to settle in the capital, clearly being unfairly singled out because he is a Muslim.  Khan countered:

It was as far back as 2011 that Sayeeda Warsi, the then Conservative party chairman, said that Islamophobia had “passed the dinner-table test” and become widely socially acceptable in Britain.

It is deeply disappointing that the UK government continues to ignore this elephant in the room, and tolerates bigotry in all its forms even amongst the higher echelons of power, despite the British public speaking loud and clear that racism is unacceptable. People who protested against a “stupid, callous, fragile, racist, narcissistic POTUS” (as a poster read) on Friday, in their clearest terms echoed that they will expect nothing less than a country with zero tolerance to racism, xenophobia, Islamophobia and anti-Semitism and where diversity is celebrated.

However, if the past is anything to go by, those in government often feign sleep in the midst of public outcries in this regard and only persistent public activism can push them towards concerted action to tackle bigotry and racism.