Trump: a Blessing in Orange Disguise 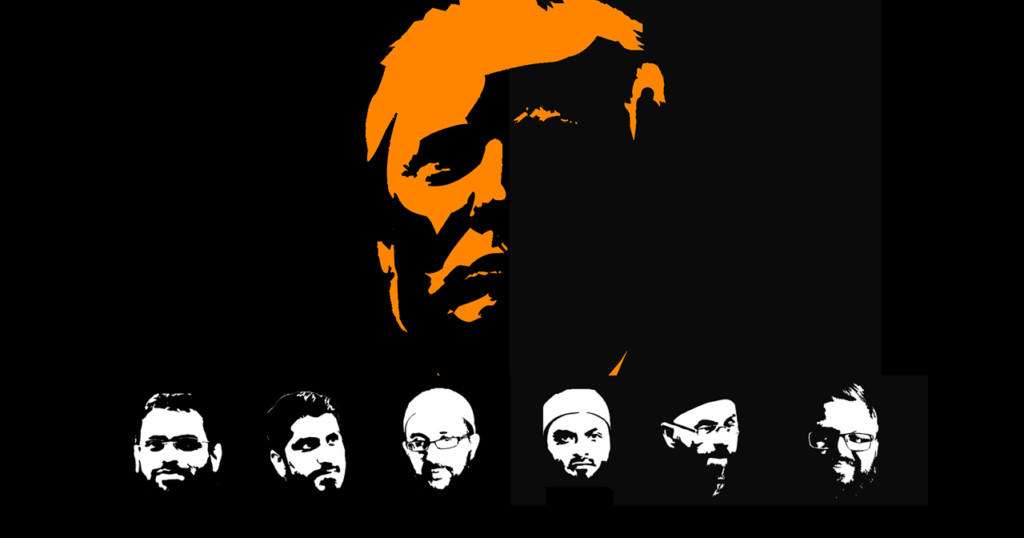 The following are recordings of the talks delivered at the event. A continuous recording of the whole event is at the bottom of this page. 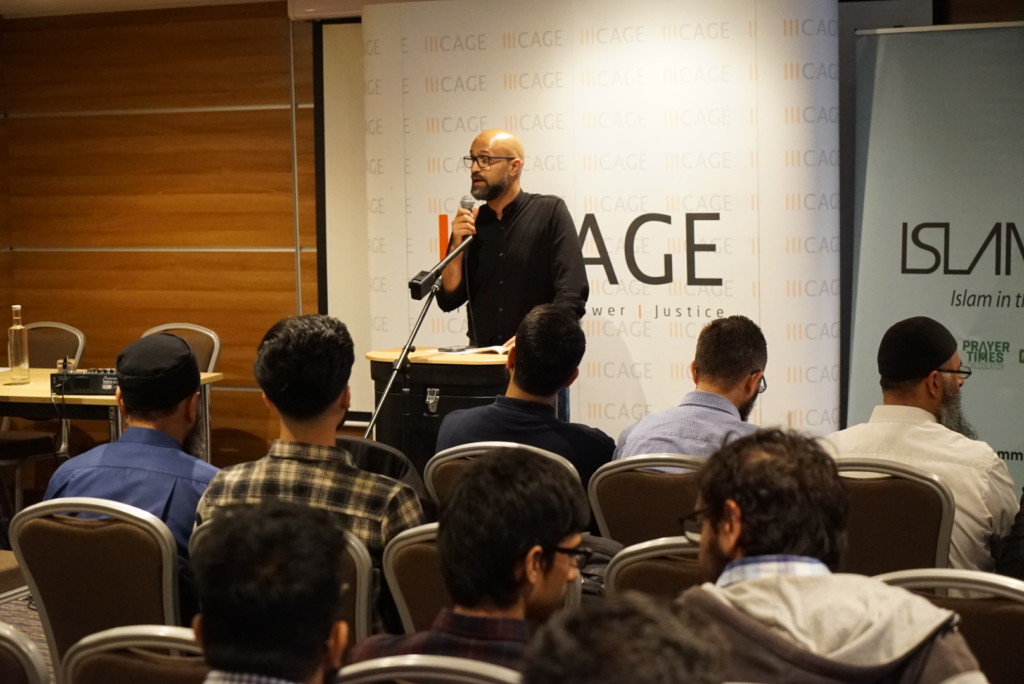 Asim Qureshi introduced the event and shared some reflections from the book On Tyranny: Twenty Lessons from the Twentieth Century by Timothy Snyder. 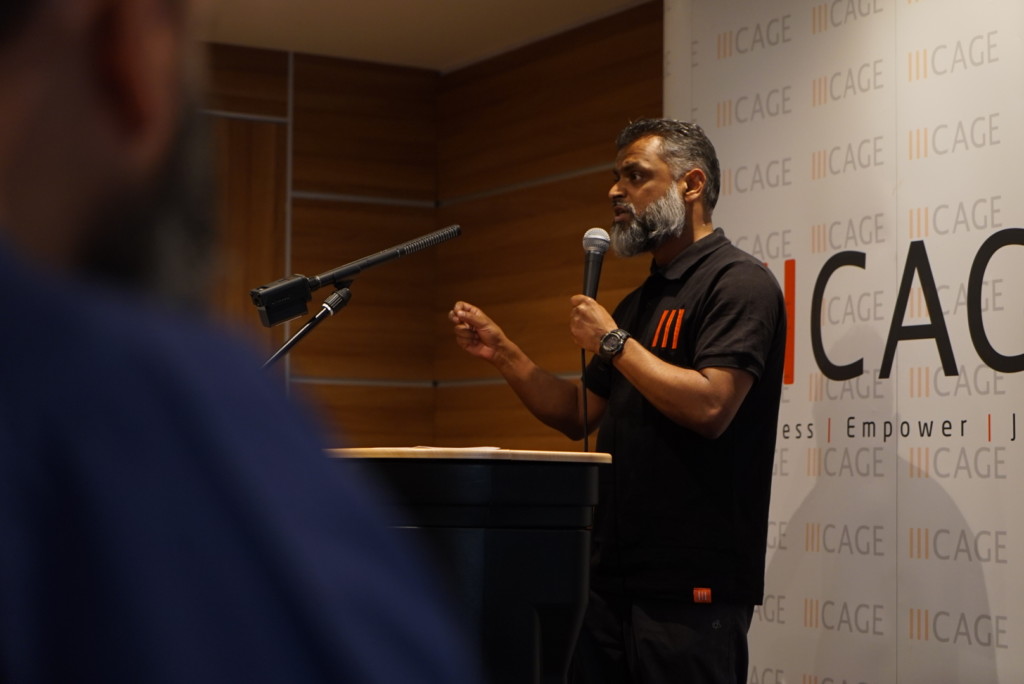 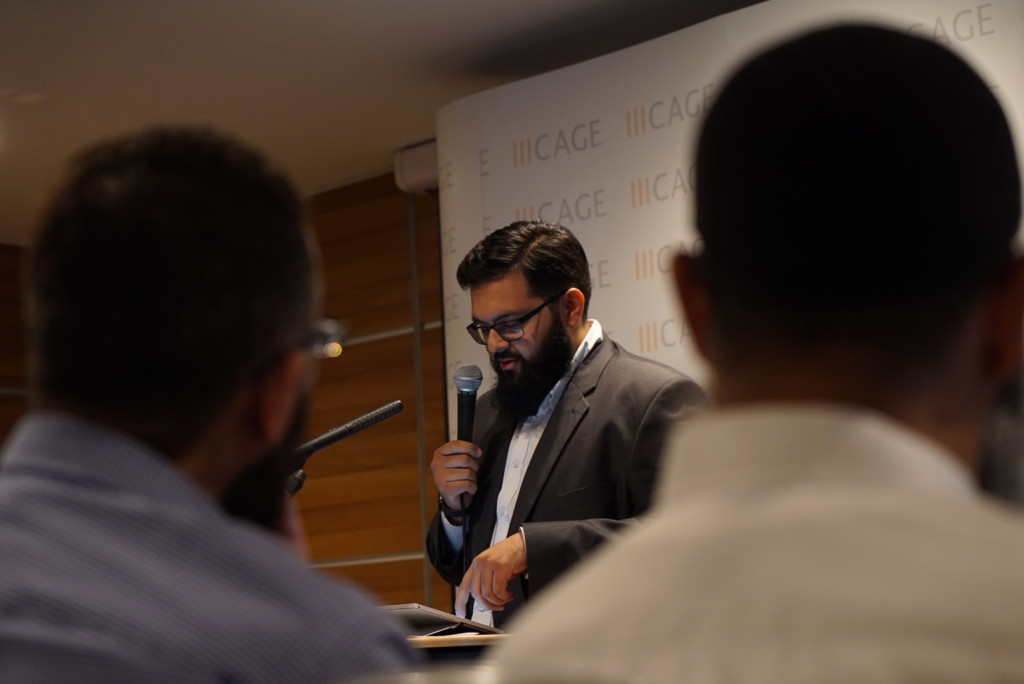 Dr Salman Butt reminded us about the worrying trend and impact of internet and social media algorithms and how they are in effect perpetuating racism, hatred and bigotry. We live in an “attention economy” now where attention engineers are employed to increase “time spent on site” with the most sophisticated psychological tools. With social media, sites will prioritise posts that are statistically more likely to keep your attention, regardless of truth value or benefit. This has lead to a polarised and angrier society and was directly exploited for the election of Trump. 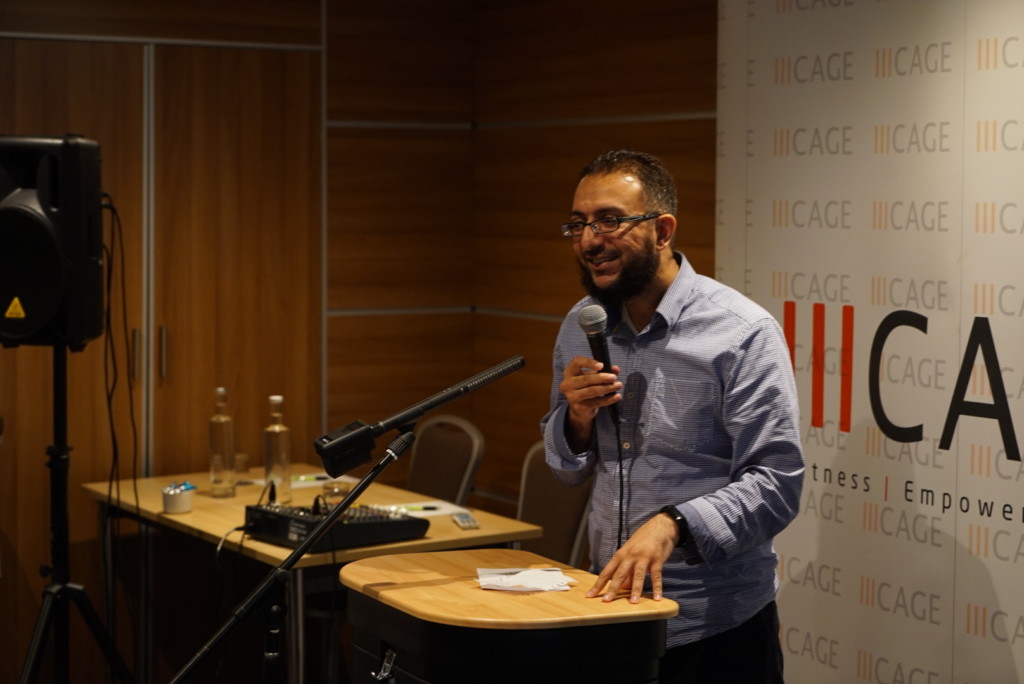 Dr Uthman Lateef stated that whenever you have a conflict, there are always 4 groups: (1) the victims; (2) the perpetrators; (3) by-standers and (3) the rescuers. The last group is always very small as it requires a lot of effort, selflessness and courage. Islam obligates us with social justice responsibilities and we should always seek to be the rescuers. Muslims of the past have showed such proactivity in conflicts gone by such as the Albanians with the holocaust or during the Rwandan genocide.

Muhammad Ali’s (raḥimahu Allāhu) poem (which is the shortest poem in the English language) “Me, We” provides us with the solution in the briefest terms as it expresses a sense of community, and of appreciation for support and togetherness. In order to face the challenges in standing up to oppression, we must forge alliances and make allies with those whom we have common objectives with – if we do not do this, the oppressors will always have the upper hand. 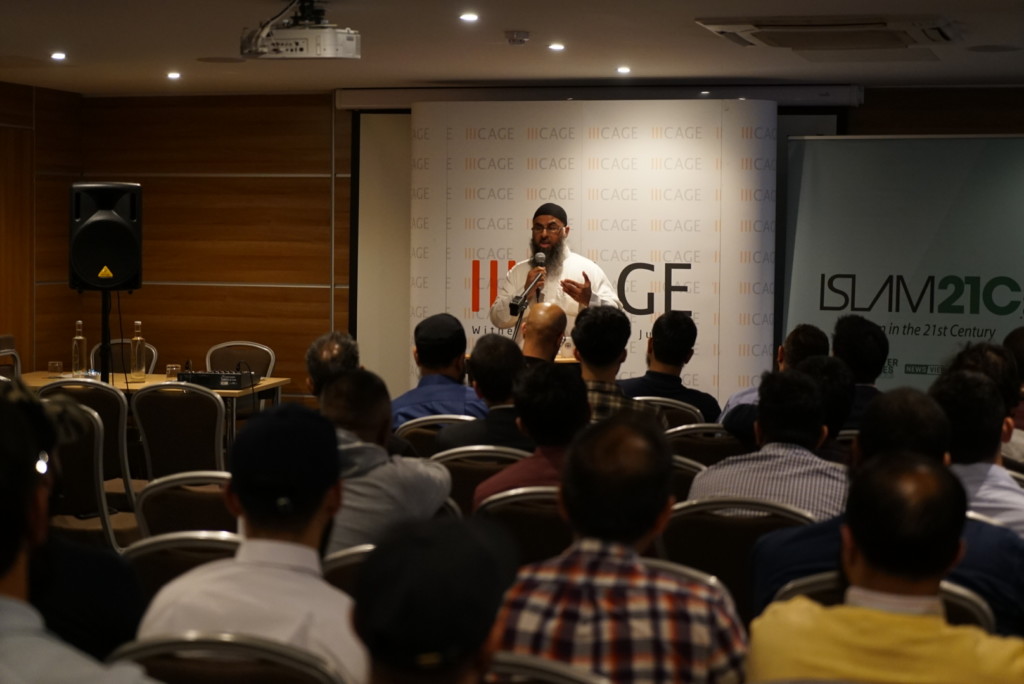 Sh Shaqur Rehman reminded us about Islam’s position on oppression, how serious it is and how detested it is in the sight of Allah.

How the role of every Messenger was to stand to a tyrant and oppressive society and turn the order on its head.

He reminded us that we all have a positive duty to stand up against and confront oppression wherever we see it and however we are able to. Allah has blessed us all with different abilities and skills and if you fail to utilise that skill/ability, then you are failing in your duty and obligation to Allah. 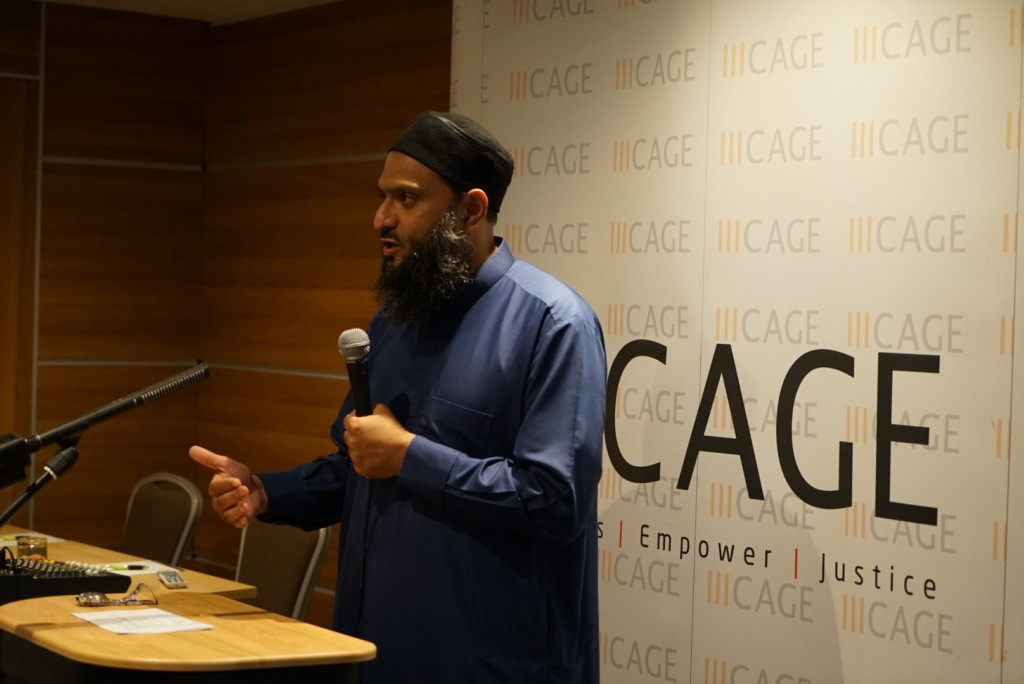 Imam Shakeel Begg spoke about the importance of events such as these. We should be at the forefront of leading these events, rallies and the like because Allah has made us, the Muslims, leaders so we should lead.

Malcolm X would say that the slave masters would teach slaves that if they are slapped on one cheek they should turn the other cheek. This was used by those in power to domesticate the slaves. Similarly today we find some who will discourage us from standing up, discourage demonstrating, rallying, marching etc. when in reality, this only serves those in power.

Imam Shakeel’s entire discussion ended on the advice that Luqmān (ʿalayhi al-Salām) gave to his son as told in the Qur’ān. He instructed his son to keep up prayer and to enjoin what is good, and forbid what is evil. We must, thus, embody teaching in our children rather than instilling fear in them to stand up for what is good and what is just. 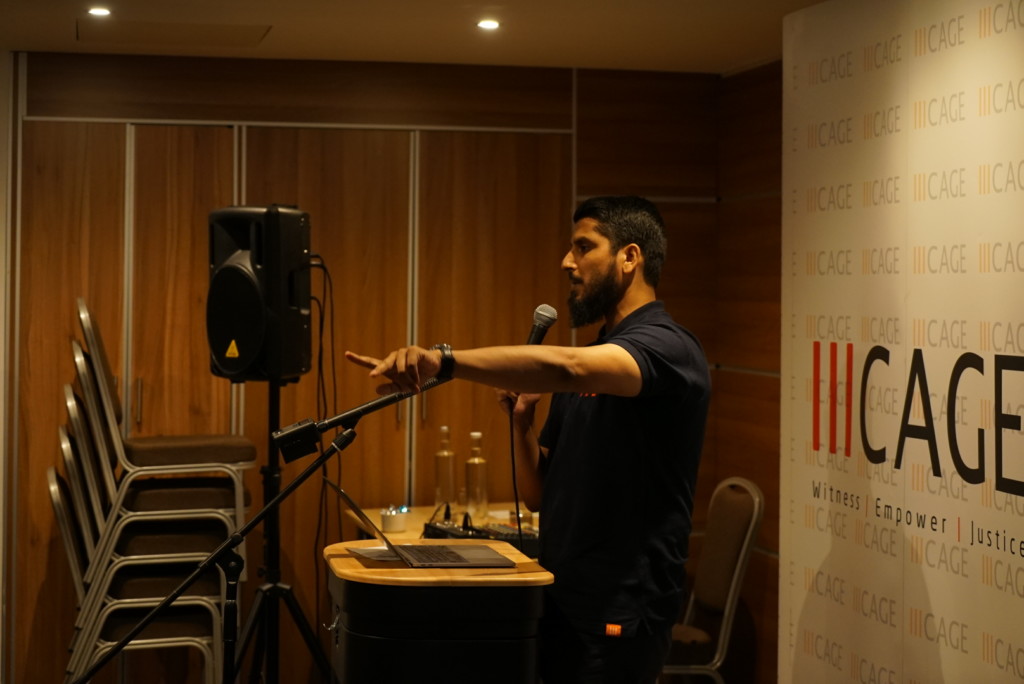 Muhammad Rabbani concluded with an important set of action points. He focused on the concept of fear and how the antidote of fear is courage. Every child is born with two fears (1) sudden loud noise, and (2) falling. All other fears are ones we acquire; we need to release ourselves and unburden ourselves from these, many of which are completely irrational when assessed objectively.

As a community, we are very altruistic – this is evident from the vast sums of money the Muslim community here in the U.K. and elsewhere give, alḥamdulillāh. Although this must continue, and should be praised, we need to move to the next tier, a higher tier if we are to effect change and that is ‘Heroism’. Whilst Altruism is, generally speaking, being risk averse, Heroism requires us to be prepared to sacrifice and be courageous – this is the way of all the prophets, the companions and all the greats of the past.

We must be wary of the pressure to conform to the values of the dominant society around us at the expense of our values – we should work with anyone but on our noble principles and values.