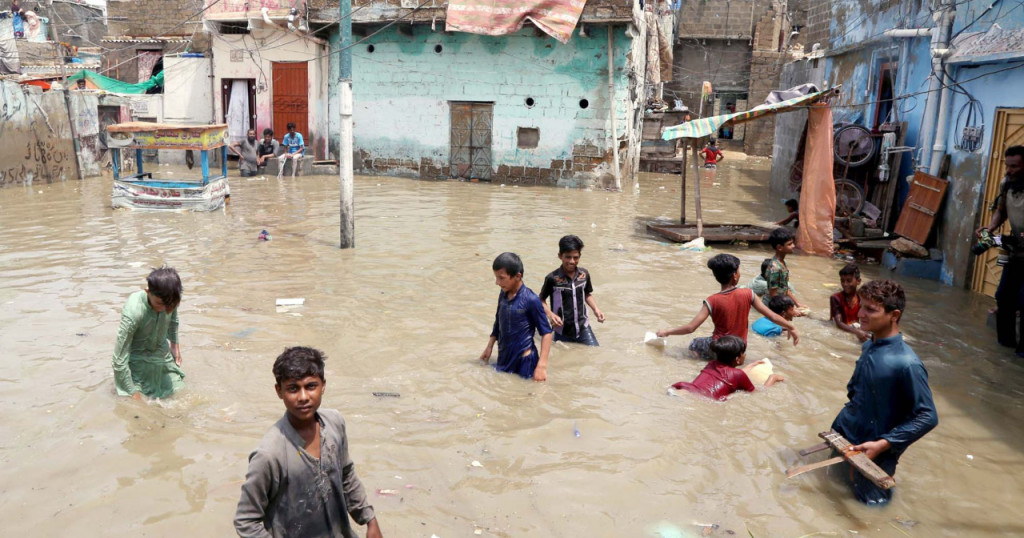 From June 2022, devastating floods in Pakistan have killed at least 1,985 people, including 380 children. The floods began due to heavy monsoon rains, and the melting of glaciers following the severe heatwave Pakistan faced this year.

Beginning in April the heatwave temperature hit as high as 49.5°C in Pakistan, with the Pakistan Meteorological Department’s Chief Forecaster Zaheer Ahmad Babar stating that “This year we have jumped from winter right into summer.”[1]

Pakistan houses around 7,000 glaciers, and due to the heatwave officials had warned of possible water related natural disasters. In the beginning of May this year, a flash flood, caused by a glacier melting, swept away a highway bridge in the Gilgit-Baltistan region. Officials had warned that there were a possible 33 other lakes which were at risk of the same glacier lake outburst floods.[2] According to the National Disaster Management Authority (NDMA) Pakistan has received 166.8mm of rain this August, as opposed to the average of 48 mm. This is an increase of around 241 per cent.

Officials have stated this year’s floods are on par with those of 2010, the worst on record, and on August 26th Pakistan declared the flooding’s a national emergency.

Rescuers are struggling to reach villages, with many either having been swept away or cut off due to the flood water. Hundreds of health facilities, bridges, and roads have been damaged making it all the more challenging for aid to reach the estimated 6 million in desperate need of it. [4]

Pakistan’s planning minister has stated that the floods have caused at least $10bn worth of damage, with the floods also inciting a food shortage. [5]

On the 30th of August, the Government of Pakistan, alongside the United Nations have launched an appeal for $160 million to help the recovery process, and on September 1st, following the launch of the Disasters Emergency Committee Pakistan Floods Appeal, the UK has pledged £15 million in aid, stating that it will match pound for pound for the first £5 million of public donations. [6]

Despite the fact that Pakistan only produces 1% of global greenhouse gas emissions it consistently ranks in the top 10 countries most vulnerable to the effects and impacts of climate change.

In moments of crisis like these many might begin to question why calamities happen and what our response should be to them. It is important to view events through the prism of knowledge and remember that everything Allah decrees in this universe has immense wisdom.

Every created thing occurs with the decree of Allāh. Allāh Almighty said: “Indeed, all things We created with qadar (predestination).”[10] The meaning of ‘with the qadar’ of Allāh, is that Allāh willed for something to occur in a specific way, amount, time and place, by a specific actor, through specific means. Allāh decreed all these details, thus He knows them all. Furthermore He wrote them in the Preserved Tablet (al-Lawh al-Mahfūdh). As reported in Sahīh Muslim by ʿAbd Allāh b. ʿAmr b. al-Ās who said: I heard the Prophet (peace be upon him) say: “Allāh wrote the dictates of all creation fifty thousand years before creating the heavens and earth.”[11]

The qadar of Allāh is of two categories…

In times like these, we must look at ourselves and our actions. The environment in which we live was perfected in its creation by God, and thus we have a duty and responsibility to look after it, to maintain and preserve it. This was indeed the dominant paradigm in the world for man’s relationship with nature—the Quranic notion of divine stewardship or khilāfah—before the current reigning modernist paradigm was imposed on the world—that of man being in constant competition to dominate and plunder nature. Allah clearly warns against those that abuse and corrupt the people and land upon which they reside.