A niqābi at a football match, surely not? 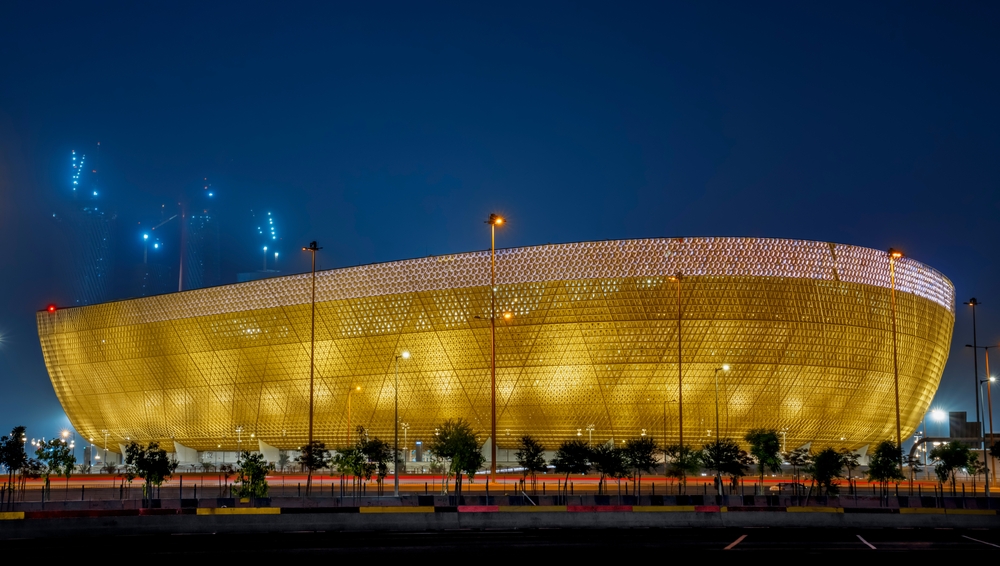 It was another match day, the big one: Argentina vs. Mexico. Before I go into what happened at that game, I wanted to highlight something I saw during the Saudi Arabia vs. Poland match. After a goal has been scored, it’s a routine occurrence to see Sujūd al-Shukr performed at various grounds across the Premier League. It’s as normal as players running off in celebration. Demba Ba was the first player I remember doing it in England. However, it was Mohammed Salah who made it prominent and normalised it. The reason I bring this up is that Salem al-Dawsari, the Saudi striker, missed a penalty and still made the Sujūd al-Shukr – showing gratitude in the supposed bad times.

Then came the main event. What a way to end my footballing journey in Qatar, Argentina vs. Mexico in front of 88,000 supporters. Much has been made about this World Cup not having the same ardour as previous editions. However, those of us in attendance gathered to form the biggest crowd at the tournament since the 1994 final.

The venue for this match? The majestic Lusail Iconic Stadium. This site will also host the 2022 World Cup final, a fitting place to display the peak of football.

Kick-off was 10 PM local time, the latest I’ve ever been to a game. Lusail is about 12 miles away from Doha, so we had to take an Uber to the vicinity of the arena. It was then about a 25-minute walk to get to the entrance. The surrounding area was a mixture of newly built apartment buildings and some still being constructed. The temperature was a warm 25 degrees Celsius – hot but manageable.

By the time I got to the stadium, beads of sweat had formed on my brow. A brisk pass through security and I was then just outside the structure, the first time seeing it in all its glory. It illuminated the dark night sky in a hue of gold. The design, modelled on handcrafted bowls that are prominent in the Islamic world.

Both sets of fans were in good voice. Scores of Mexican fans were wearing their traditional hat, the sombrero, a high crowned hat with an oversized brim. My brother took a picture with a man dressed in a traditional Mexican matador outfit; clearly, he was ready for the occasion.

Our seats were located near the top of the stadium, so I had to scale five flights of stairs, which was a workout and a half. I was in my seat two hours before kick-off and the anticipation was building. By the time the game started, I would say that the crowd had marginally more Argentinean than Mexican fans. La Albiceleste, the famed blue and white of Argentina, was distinct from the dark green pepper-coloured shirts of El Tri. Both sets of fans were in full voice.

Ever seen a niqābi sister at a match?

Something I noticed at the Senegal vs. the Netherlands game and really brought home here was the number of families that had come to watch the games.

While it was an extremely late kick-off, children were still at the stadium. There was a family-of-three in front of me: the mother, father, and child sat in the row below. The little girl, probably about five- or six-years-old, fell asleep early in the contest. I’m not sure how she managed to sleep through the fervent noise, more on that later. More besides, I saw another family, clearly Muslim, as the wife was wearing a niqāb. A niqābi sister at a football match, that’s something I’ve never seen and will probably never see again.

Certainly, I doubt you would find such a spectacle in Europe, especially in countries like France and Switzerland, where wearing niqāb is banned in public spaces. And this is without mentioning that a former British Foreign Secretary (and subsequent Prime Minister) once described niqābis as “letter-boxes”. [1] [2] [3]

There was a carnival atmosphere within the stands, both sets of fans chanting, singing, and waving their flags. Messi was shown on the screens for the first time, the Argentine masses’ voices swelled. This was swiftly followed by loud boos from the Mexican fans, the first of such exchanges.

The pre-match festivities included the amazing light show I spoke about in a previous article. This time, I was front facing towards the theatrics, as I was adjacent to the media in attendance. I took a video of it as I did last time and sent it to some brothers. They were glad I did – turns out that the broadcast didn’t show it. I’m not sure why it isn’t shown, it adds to the spectacle. It only lasted for about 90 seconds, so there would surely have been time to air it.

The atmosphere was electric. Both the players and the supporters knew what was at stake. Had Argentina lost, they would be out at the first hurdle. Had Mexico lost, getting through to the next stage would have been difficult.

While a battle was fought on the pitch, there was one being contested off it, in the stands. It was like Hagler-Hearns, every thunderous blow was met with a counterattack. The “Argentina, Argentina” chants were responded to with cries of “Mexico, Mexico.” When a decision went for Mexico, the Mexican fans cheered, and the Argentine fans jeered in return.

Then it happened. In the 64th minute, Messi popped up to break the deadlock, a shot placed into the bottom corner, out of reach from the despairing keeper.

I didn’t think it was possible but an already raucous crowd got even louder. The ecstasy of the Argentinean supporters was met with the agony of the Mexican fans. The cheering was stentorian; you could feel the vibrations in your feet. I’ve been to matches with great ambience before, I’ve watched football in bigger crowds, both at the Camp Nou and Westfalenstadion, but I’ve never been in a crowd that loud.

A chant of “Messi, Messi” rang around the stadium. This time there was no corresponding retort. Those in green were silent, despondent. Their team was yet to fashion a meaningful chance and that goal led to the wind being knocked out of them.

The Argentine spectators could not have been more different; a chant heard throughout proceedings reverberated around the stadium once again.

Messi turned to the crowd one more time before heading back to get ready for the match to restart. He raised his clenched fists. He was behaving like a conductor: his orchestra, the crowd. They responded in kind, raising their voices a few more octaves.

It took another ten minutes before the Mexicans found their voice. They were willing their players to respond in kind, but it never came. Instead, the opposite happened, the knockout blow. It all started from a short corner, the ball was played to Messi who laid it off to Fernandez. Fernandez cut inside from the edge of the box and curled it into the top corner.

The Argentine players were celebrating in the corner of the stadium where I was. The roof almost blew off the stadium. It was raucous. I was getting messages from back home that I was fortunate to be there and it was a great way to end my time in Qatar. What I was experiencing was felt through the screen back in the UK.

I’ve watched many matches on TV where there has been a booming crowd that elevates the spectacle. This was the case when seeing my beloved Liverpool on European nights. I’ve never experienced this but my eldest brother has. Just watching on TV, you could feel and taste it, they live long in the memory. I was fortunate to be at this particular game, to really drink it in. I’m not sure it’ll ever be matched.

The game ended just before midnight local time and I was still buzzing, the adrenaline was coursing through my veins. I made my way out of the grounds and was greeted by a congregation of Argentine fans huddled together, singing and dancing. They knew they had witnessed something special; it could be the catalyst to the start of their journey to the top of the mountain, to finally lifting the World Cup again. Their first since 1986 when a Maradona-inspired Argentina lifted the trophy.

My brothers and I made our way back to the apartment, first via a bus, then an Uber. It was time to get packed to come home. My World Cup journey was almost at an end. This will be the last piece I’ve written while in Qatar. By the time you read this, I should be back in Luton, in shā Allah.

Truth be told, I had not intended to write anything about my time at the World Cup. It was a break from all the hustle and bustle in the UK. However, I was requested to put down my escapades when people back home were seeing how the coverage around this World Cup was proceeding.

I got some amazing feedback from you all, because it gave a perspective of a regular person on the ground as I traversed through this great event, through this hospitable country. I hope you enjoyed reading these pieces as much as I did, writing them. Once I’m back in the UK, I’ll write my post-Qatar reflections, an epilogue of sorts.