Reaction as Hagia Sophia reopens its doors to Muslim worshippers 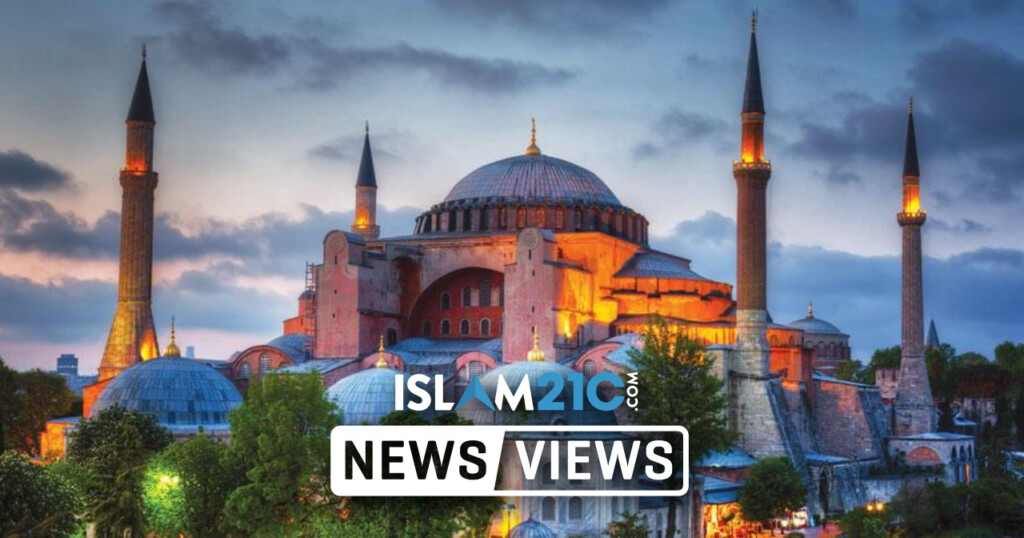 Today marked a return of Muslim prayer in the iconic Hagia Sophia in Istanbul, after Turkey’s top court ruled two weeks ago that its conversion from a masjid to a museum in the 1930s was illegal.[1] Thousands gathered outside the masjid, whilst numbers were limited to below 1000 inside due to social distancing requirements.

President Erdoğan was amongst many worshippers inside, marking the occasion by reciting from the Qur’ān ahead of the Friday prayer. Sūrah Maryam was also recited, which was pertinent given the history of the building, and replicating one of the great companions Ja’far ibn Abī Tālib reciting from the same chapter when asked to explain his religion to the King of Abyssinia, Najāshi, in 613/14.

The return of Hagia Sophia as a masjid was celebrated by millions of Muslims in Turkey and millions more around the world. Sources on the ground praised how well-run the grand opening was, with areas quickly set up for men and women to pray, and over 700 health personnel on hand.[2]

The Imam, delivering his sermon with a sword by his side, praised the moment, saying:

“Today is the day when takbīr, prayers, and salawāt [salutation upon the prophet of Islam] resonate in the domes of Hagia Sophia, and the adhān [call for prayer] rises from its minarets.

“The reopening of Hagia Sophia to worship means all crestfallen and oppressed masjids on earth, first and foremost Masjid Al-Aqsa, have their hopes restored again.

The reopening of Hagia Sophia to worship means that our civilization, the foundation of which is tawhīd, the building block of which is knowledge, and the cement of which is virtue, continues to rise.”

Whilst Turkey has pledged to keep the site open to tourists and remove any entrance fees, it was also announced that the Qur’ān would be played 24 hours a day and all five daily prayers would be held from today onwards.[4]

“We are ending our 86 years of longing today. Thanks to our president and the court decision, today we are going to have our Friday prayers in Hagia Sophia.”[5]

Another explained how she had cut short her holiday to rush back to Istanbul to catch the landmark moment. Similar moments of elation from the Ummah at large were shared on social media.

“The chains around the Ayasofya have been broken. Turkey will no longer be the same. The time has come for it [to] rightfully command its sovereignty. The spirit of the Ottomans [has] been revived in the hearts of the Turks. Allahu Ekber! What a time to be alive in!”[6]

Congratulations to the Muslim world.

Hagia Sofia is no longer a Museum. It has been turned back into a Mosque. 1st AZAAN after 8 decades took place today. #AyasofyaCamii#Turkey Does It Again. Alhamdolillah pic.twitter.com/mIYrzJA5hh

Masjid Ayasofya is ready for it's first Jummah Salah since being restored as a mosque.

People have been queuing up since last night so they get a chance to secure a spot and pray there on this historic occasion.#Turkey #ayasofya #AyasofyaCamii #HagiaSophiaMosque pic.twitter.com/kyeLXpVsL4