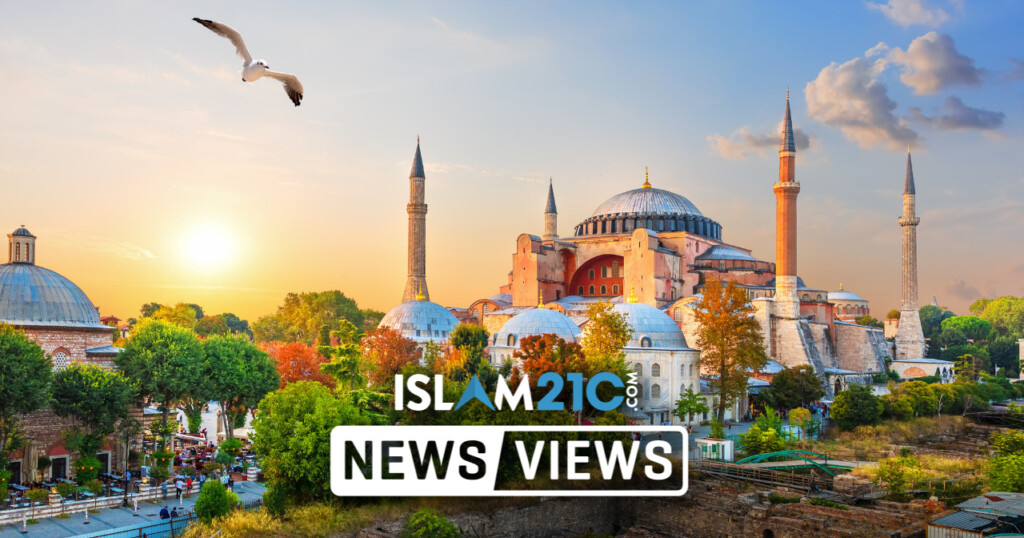 A Turkish court ruled today that Istanbul’s iconic Hagia Sophia will be converted from a world-famous museum back into a mosque. The change has long been sought after by Turkish President Recep Tayyip Erdoğan, who signed a decree on Friday opening the building for worship and paving the way for its reconversion to a mosque. This change has also been one of President Erdoğan’s campaign pledges during the Istanbul municipal elections last year. [1]

President Erdoğan declared the Hagia Sophia Mosque open to Muslim worship after a top court ruled that the building’s conversion to a museum in 1935 by modern Turkey’s founding statesman, Mustafa Kemal Atatürk, was illegal.

President Erdoğan announced the reopening of the iconic cultural site to Muslim worship one hour after the court ruling was revealed, despite international warnings not to change its status.

“The decision was taken to hand over the management of the Ayasofya Mosque … to the Religious Affairs Directorate and open it for worship.”

President Erdogan signs the decree to re-open #HagiaSophia as a mosque. In the decree, #Erdogan referers to the court decision and transfers the property to Diyanet, the directorate of religious affairs as a mosque to be opened for prayers pic.twitter.com/m4DAwoqJwH

After an 85-year hiatus, the Permanent Foundations Service to Historical Artifacts and Environment Association, an NGO in Istanbul, had filed a petition at the Council of State seeking annulment of the decision to convert Hagia Sophia into a museum.

The court issued its ruling – that Hagia Sophia was owned by a foundation established by the Ottoman Sultan Mehmed the Conqueror and was presented to the community as a mosque – after it heard the parties’ arguments at a hearing on 2nd July.

The decision ruled that Hagia Sophia was defined as a “mosque” and that the society the mosque was bestowed to cannot be prevented from exercising its rights and benefits through the age-old immovable property that the foundation left to it.

The court concluded that it would not legally be possible to use the building as anything other than a mosque, as defined in the deed.

Call to prayer from the Hagia Sophia, hours after it was converted into a mosque pic.twitter.com/dqyUQ16q1Y

Hagia Sophia had been used as a church for 916 years under the Byzantine Empire but was later converted into a mosque in 1453 by Sultan Mehmed II, after the Ottoman Empire conquered Istanbul.[2]

The building then underwent necessary restoration work to emulate the characteristic features of mosques, including the addition of minarets for the call to prayer.

It was then changed to a museum in 1935 by then-president Atatürk under the Turkish Republic, after the dissolution of the Ottoman Empire.

However, in recent years, Turkish leaders, including President Erdoğan, had called for it to be used as a mosque again, enjoining the recitation of the Qur’ān in its vicinity on special occasions.

UNESCO, Greece, Cyprus, and church leaders, among others, have expressed deep concern about the change in the status of the 6th-century site. In response to the court ruling, the Russian Orthodox Church spokesman Vladimir Legoida said:

“The concern of millions of Christians has not been heard.”

“Today’s court ruling shows that all calls for the need for extreme delicacy in this matter were ignored.”

The Cypriot Foreign Minister Nikos Christodoulides, a Greek Cypriot, tweeted that Cyprus “strongly condemns Turkey’s actions on Hagia Sophia in its effort to distract domestic opinion and calls on Turkey to respect its international obligations”.

“Turning it into a mosque will not do anything for the Muslim world. It does not bring nations together, but on the contrary brings them into collision.”

Istanbul is a city of mosques and the politics that surrounds them. Just as Ataturk un-mosqued Hagia Sophia 86 years ago to underline his secularist revolution, Erdogan wants to convert the building back into a mosque to underline his religious revolution, vice Ataturk's legacy

A Return to the Golden Ages

Turkey today has witnessed drastic changes ever since the abolishment of the Ottoman caliphate and the rise of the Zionist-sponsored secularist Mustafa Kemal “Atatürk”. [3] “Atatürk” came to power and imposed decades of secularism on the Turkish people. Turkey endured a staunchly secularised political climate for a number of years but is currently undergoing a remarkable transitional period of removing itself of the tyranny that has suffocated it.

In recent years, under the leadership of the Justice and Development Party (AK Party), Turkey has reversed the hijab ban, built more than 17,000 new mosques, reinforced family values, clamped down on alcoholism, and formed many other policies in line with Islamic principles. [4]

In February 2018, President Erdoğan also said that the Republic of Turkey is a continuation of the Ottoman Empire. During a memorial ceremony to mark the anniversary of the death of Ottoman Sultan Abdul Hamid II, President Erdoğan stated:

The Turkish people have come a very long way since the abolishment of the Ottoman caliphate, an event that certainly marked a turning point in history – one that was so momentous that mankind can feel its aftershocks until the present day. However, even with the vicious decades of secularism that were enforced following the fall of the Ottoman caliphate, the Turkish people have used every means to preserve and uphold their Islamic identity against the toxic secular “Atatürk”-driven assault against the deep-rooted values of the Turkish people.