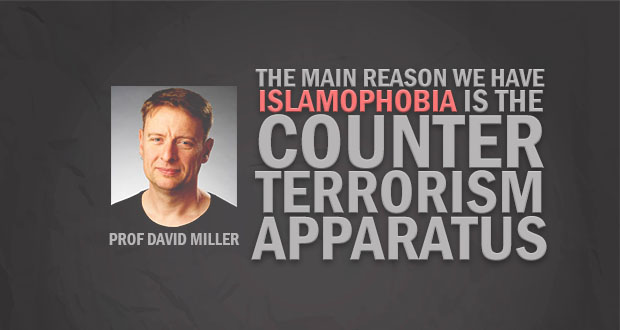 The Islamic Human Rights Commission (IHRC) has recently published lectures from its most recent Islamophobia conference,[1] including the following remarks by Professor David Miller.

He begins with the bold statement,

He points out the insistence of some politicians and police chiefs that “Radical Islam is the greatest threat to Britain” which, upon closer inspection and statistical analysis, is simply untrue. This is in addition to the flurry of “attacks” spread across the media; lesser crimes and antisocial behaviour carried out by Muslim perpetrators that are inflated into “terror plots” for the security establishment and Islamophobia industry to create more fear. This feeds into the “apparatus of propaganda” to create a “fake terrorism threat”.

The Prevent duty is also the subject of some remarks since its placing on statutory footing in the 2015 CTS Act, effectively spreading counterterrorism apparatus to all public sector employees.

This goes to show that the light of facts and statistical analysis is sometimes all one needs to dispel the darkness that is required for inflating the “Islamist terror threat” and anti-Muslim hysteria. Last year we saw a landmark legal challenge against the UK’s Prevent policy,[2] which revealed similar and widespread problems with Prevent.[3]

The IHRC conference also featured other lectures, including from the renowned decolonial thinker Professor Ramón Grosfoguel, on Islamophobia as a “Coordinated Global Project” globalised coordination of Islamophobia: