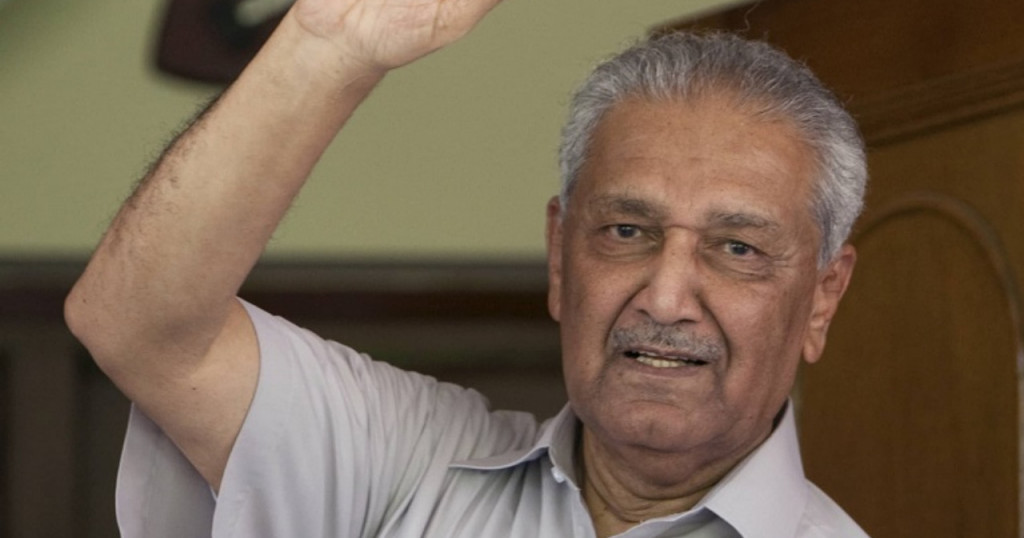 After Pakistani nuclear scientist Abdul Qadeer Khan passed away on 10 October at the age of eighty-five, a smear campaign was immediately organised against him in the West. The chief protagonists were Western media outlets, commentators, and even historians. Khan had been subject to smears and outright demonisation throughout his life, with all kinds of offensive labels used against him. While some observers claimed that he was a spy, others vilified him with the offensive label of “nuclear Jihadist”. This was especially the case after Pakistan conducted its nuclear tests on 28 May 1998. Yet, it is notable that the key figure in the development of Indian missile technology and nuclear testing was also a Muslim scientist, namely Dr Abdul Kalam, the 11th President of India. Neither Kalam nor India are subject to the same vilification for their development of nuclear technology, since India is not a Muslim majority state. Even more disappointingly, neither India nor Israel’s nuclear programmes (or their scientists) come under scrutiny in the West or by UN agencies.

The reason why Khan is vilified in the West is because he fostered the development of a nuclear deterrent for a Muslim majority country: Pakistan. This very state was expected to be dismembered by India after the 1971 war, which ended in the loss of East Pakistan and the creation of an independent Bangladesh.

India conducted its first test of a nuclear bomb in 1974. Pakistan then became determined to acquire nuclear weapons as a defensive deterrent and means of survival during the 1970s. Research and development commenced through the Pakistan Atomic Energy Commission (PAEC). It was India’s ally, the Soviet Union, who took advantage of Pakistan’s weakness and invaded Afghanistan. Pakistan stood next in line, as it was ripe for a breakup. However, these ambitions were thwarted after a Pakistan-US alliance ensured that it was the Soviet Union – and not Pakistan – that disintegrated.

Work had already commenced on nuclear technology in Pakistan (through nuclear physicist Munir Ahmad Khan at PAEC), with China also providing aid in the late 1970s for technology and design. However, it was the work of Khan which ultimately facilitated Pakistan’s rise to becoming a military nuclear power.

Khan was born in 1936 in the Indian state of Bhopal, and was of Pashtun origin. He moved to Pakistan from India in 1952. His family had migrated in 1947, the year the partition occurred. He was proud of both episodes, saying that “Bhopal never produced a traitor”, and also declaring, “I am a Yusufzai Pathan, I developed the bomb so that Pakistan never has to bow/surrender to anyone”. It was this fierce Pashtun determination and spirit of independence that drove him to empower Pakistan and other Muslim states with nuclear technology.

Western media outlets maliciously portray Khan as a spy, thief, mercenary, braggard, liar, warmonger, and a person motivated by personal greed. Asked about this demonisation in 2008, he replied:

Of course, typical of western supremacy, European scientists and arms industry traders are viewed through the lens of a higher moral calling and conscience. They are almost always portrayed as fostering global peace and civilising other countries.

The Khan story is that of an individual who was hard working, dedicated to learning, devoted to a cause, understood the political world around him, and acted with a great deal of intelligence. He was a man motivated by his faith, and it was the will of Allah عز و جل that the historical realities of his time coalesced for him be able to complete his mission and achieve Pakistan’s goal. It was a significant moment when the interests of Pakistan and the West vis-à-vis Afghanistan were aligned. Even though the US became aware of Pakistan’s ambitions, they were not able to sanction or disrupt a country that was their ally against another superpower.

Khan went from being a weights and measures inspector for Karachi’s city government in Pakistan (1956-1959) to becoming one of the most well-known nuclear scientists in the world. Whilst working in local public services, he won a scholarship to study in Germany. It was his education, love for science, and work experience (in Europe) that enabled him to acquire the skills and knowledge that would develop his nuclear expertise. His learning and experience can be summarised with the following points:

By 1975, Pakistan had already started work on its domestic nuclear programme, buying some components from Urenco. Around this very time, Khan contacted leaders in Pakistan and offered his services. In December 1975, he returned to Pakistan with details of one hundred companies who traded in various parts used for the nuclear industry, as well blueprints for centrifuges.

In 1976, AQK began centrifuge work with the Pakistan Atomic Energy Commission (PAEC), headed by Munir Ahmad Khan. AQK and Munir never got on, and he disagreed with the Munir’s plans to develop a bomb using military grade plutonium instead of uranium. After conflicts at the PAEC, Prime Minister Bhutto gave Khan autonomous control over Pakistani uranium enrichment programmes. Khan founded the Engineering Research Laboratory (ERL later renamed Khan Research Laboratories KRL) which focused exclusively on developing an indigenous uranium enrichment capability. It was PAEC who would later develop Pakistan’s first generation of nuclear power. However, it was Khan’s Uranium enrichment programme and centrifuge designs which he had learned from Europe and enhanced for use in the development of Pakistan nuclear bomb tests in 1998. He had purchased all the individual parts of components separately from European companies to avoid suspicion. Both at PAEC and KRL other prominent Pakistani nuclear scientists were also part of the nuclear research and development teams. China also provided design blueprints. KRL worked on both nuclear development and missile technology.

In 1983, Khan was convicted in absentia in a Dutch court for espionage. He was sentenced to four years in prison for requesting technical information for the operations of KRL. Khan successfully challenged and appealed the conviction with his lawyers, using evidence from Leuven University. It was argued that such information was publicly available in many books, research papers, and undergraduate courses. Although the sentence was overturned due to a technicality, there was no prospect of another conviction, given the compelling evidence presented.

Afterwards, Khan also denied allegations of breaching nuclear proliferation treaties. He correctly argued that Pakistan was not a signatory to any non-proliferation agreements. As a result, he was doing nothing wrong by exporting any information or technology to other countries.

A.Q. Khan and the Ummah

Khan was not just content with developing Pakistan’s nuclear capacity, but in an Ummatic spirit he wanted to share his knowledge with other Muslim states (some argue with the co-operation of the Pakistani state). He recognised that Muslim states would be subject to wars and dismemberment by Western powers if they did not have a nuclear deterrent. From 1986-1988, it is believed that he had supplied the designs and components for uranium centrifuges to Iran, through which its current programme has developed.

In 1990, an alleged memorandum found in Iraq by UN inspectors suggests that Khan had offered to assist Iraq in developing a nuclear bomb. However, Saddam Hussain appears to have refused, as he did not trust Khan. It also appears that other Arab countries had approached him for assistance (Saudi Arabia and Syria), although nothing came of these contacts.

Khan also backed North Korea by providing nuclear information and assisting in centrifuge development. This was in return for missiles designs, that Pakistan would use for its domestic programme. As a result of these deals, North Korea is also a nuclear power today.

By 1997, Khan was supplying centrifuges and components to Libya in a multi-million-dollar deal. However, in 2003 Colonel Gaddafi announced that he was voluntarily giving up his nuclear programme in return for a deal with the West. He also informed the West that Khan had provided Libya, Iran, and North Korea assistance for their nuclear programmes. Ironically, the West’s agreement with Libya was for security purposes and developing better relations with them. George W Bush said of the deal:

“Leaders who abandon the pursuit of chemical, biological, and nuclear weapons, and the means to deliver them, will find an open path to better relations with the United States and other free nations.” [2]

In 2011, the West lived up to its supposed commitment of better relations and security for Libya by bombing the country, removing Gaddafi from power, and causing mass destruction to Libyan infrastructure. Libya barely exists as a state today, just like in the case of Iraq.

In ideal circumstances, Khan should have become a professor at a Pakistani university. He could have turned Pakistan into a hub where nuclear science would be taught to the Muslim and developing world. However, with the War on Terror beginning in 2001, Pakistan’s Pervez Musharraf allied with the United States in an arrangement which became very costly for Pakistanis. After Iraq and Afghanistan, Pakistan is the country that has suffered the most from terrorist and drone attacks, with the country’s economy facing severe losses. Since 2004, Khan became a wanted man in the US. Pakistan placed Khan under house arrest, and restricted his movements for the rest of his life. However, at the same time, the Pakistani government has consistently refused to hand over Khan to the US or allow the West to interview him.

The West’s policing agent for curbing nuclear development in the Muslim world has been the state of Israel. It destroyed Iraq’s budding nuclear plant in the 1980s and bombed a smaller nuclear reactor in Syria in 2007.[3] It is even public knowledge that Israel and India had planned to destroy Pakistan’s nuclear facilities in the 1980s.[4] After the Khan saga, non-Western nuclear scientists have become open targets, with facilities and reactors being in need of protection. These days, Israel has simply resorted to sabotage and assassination of Muslim nuclear scientists to hinder any nuclear progress among Muslim states.

The story of Khan is not just a Pakistani story, but a Muslim one. It is the story of one man’s sheer determination to turn the Muslim world into a military power and deter Western aggression against it. It is the story of a mission to stop the West from monopolising and controlling the right to nuclear technology, and instead allowing this information to be harnessed for peaceful and military purposes in other parts of the world.

Khan understood that if the Muslim world was weak militarily, it would forever remain a victim of Western military intervention and dominance. He was ultimately determined to do something about that. It is a pity that other Muslim countries did not heed his advice.

“Pakistan’s motivation for nuclear weapons arose from a need to prevent ‘nuclear blackmail’ by India. Had Iraq and Libya been nuclear powers, they wouldn’t have been destroyed in the way we have seen recently…”[5]