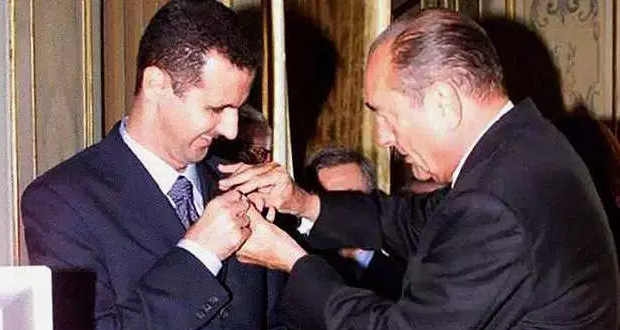 Syrian Arab President, Bashar al-Assad returned the Legion D’honneur to France today. The war criminal President Assad—whose regime routinely uses chemical agents and sexual violence as weapons against Syrians including children—was decorated with the highest class of the award, Le Grand Croix (The Great Cross), for services to France in 2001. The National Order of the Legion of Honour is divided into 5 degrees of increasing distinction; Knight, Officer, Commander, Grand Officer, and finally the most distinguished being the Grand Cross.[1] Well done Bashar.

Two years later, the London-trained Ophthalmologist was an enthusiastic assistant in George W Bush’s ‘extraordinary rendition’ program. One such case being that of Canadian citizen Maher Arar who was detained at JFK airport and then secretly transferred to Syria, where Bashar al-Assad’s mukhabarat (intelligence services) tortured Maher Arar, at times with electrical cables, for a year at the behest of the CIA.[2] Of those, Mr Arar spent 10 months in a “dark and damp”, rat-infested underground cell slightly larger than a grave.[3] Mr Arar, father of two recalled:

“Of course, this is not to mention the beatings, the physical beatings I endured at the beginning when I arrived in Syria. But I can tell you that the psychological torture that I endured during this ten-month period in the underground cell is really beyond human imagination.”[4]

Mr Arar was released and, in 2007, after a lengthy legal battle received an apology from the Canadian Prime Minister together with $10.5 million in compensation and $1 million in legal fees.[5]

Despite the 7-year-long war in which the Assad regime army has conducted unspeakable crimes, a strange alliance has developed between the extremities of the political spectrum. For some in the far-left Bashar al-Assad is mistakenly seen as a socialist. However, Assad couldn’t be further from the ideals of socialism. He is, in reality, a Baathist dictator in the mould of Saddam Hussain, having inherited power from his father, Haafez al-Assad, himself a dictator. Journalists like Robert Fisk, who had previously spoken out passionately for Palestine, have been accused of rummaging for excuses for the Assad regime.[6] It should be noted that it was indeed Fisk who in 2005 criticised journalists for embedding themselves with Anglo-American forces during the Gulf War,[7] but has himself done so with Bashar Al-Assad’s forces, most recently in Douma.[8] Has Robert Fisk forgotten about the stateless Palestinians Bashar Al-Assad starved and bombed in the Yarmouk Refugee camp in 2012, 2013 and 2014? An Amnesty international report noted:

“The harrowing accounts of [Palestinian] families having to resort to eating cats and dogs, and civilians attacked by [Syrian army] snipers as they forage for food, have become all too familiar details of the horror story that has materialized in Yarmouk.”[9]

Or has Robert Fisk forgotten Marie Colvin? The late Marie Colvin was a brave Sunday Times journalist who reported the atrocities committed by the Assad regime but was “assassinated” by the Assad regime in 2012 as part of a campaign targeting journalists covering the Syrian civil war, according to a claim filed by the family of the ‘greatest war correspondent of her generation’.[10]

For the Make-America-Great-Again-right wing, Assad has killed countless Muslims so it’s all good there too.

The trilateral pointless airstrikes should not be applauded because they were nothing more than an expensive stunt to serve an agenda we may never fully understand. Macron should not pat himself on the back for considering the removal of the French honour given to Al-Assad because French crimes in Africa are too long and ghastly to document here. Macron betrayed his own colonial, white supremacist, ideological mindset with his recent suggestion that Africa was held back by ‘civilisational’ problems and African women having too many children.[12] Conveniently forgetting the rape and pillage of the continent by white Europeans; mostly French and British.[13]

Besides, other recipients of the highest French honour include Libyan dictator Colonel Gaddafi, Italian dictator and fascist Benito Mussolini and Spanish dictator Francisco Franco who was responsible for the deaths of 400,000 political opponents.[14] Others include the ousted Tunisian dictator Zine El-Abidine Bin Ali and current Russian dictator Vladimir Putin.[1]

Bashar Al-Assad has written his name on the wall of infamy. Those who seek to make excuses for him should be concerned that history will recall their names with his blood-soaked hands. Bashar Al-Assad is among the most barbaric modern-day mass murderers having joined the sadistic pantheon of Hitler, Stalin, Mao, Pol Pot, Henry Kissinger and George W Bush. Humanity should unite in utter condemnation, if nothing else.