The Story of Saba 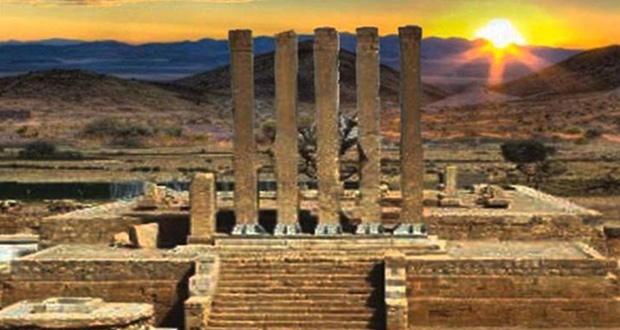 The Qur’ān, in comparison to other scripture, is a very concise book. Bearing in mind the thousands of years’ worth of human experience, a book of 114 chapters really is a summary of the best of what we need to know, and so when Allāh documents a story in the Qur’ān, realise that it has been divinely selected from the many happenings of history. One of these stories that Allāh has related to us is the story of Saba. So profound is this story that a chapter from Qur’an has been named after it; Chapter 34, Sūrah Saba.

“Certainly, there was a sign for Saba in their homeland…”

What is their story and what is the nature of this ‘sign’ which Allāh draws our attention to?

Saba is the name of one of the kingdoms of Yemen, and Balqīs – the Queen who existed during the time of Sulaymān whose story was mentioned in the Qur’ān – was amongst them. Allāh had blessed this civilisation in the most incredible ways; food was abundant, safety was at its best and the environment was as pure as can be.

Messengers were sent to them by Allāh reminding them to thank Him as they enjoyed these blessings, something which they did do for a while. With the passage of time, they changed and so the blessings that they had access to changed as well.

The ten were not necessarily his direct children but names of those from his progeny.[2] After the flood of the dam, six of the descendants of Saba remained in Yemen and four of them migrated to al-Shām. Thus the Arabs who later moved to al-Shām are originally from Yemen and the date of their migration was after the flood of Saba.

“Certainly, there was a sign for Saba in their homeland, two gardens on the right and on the left…”

For them were enormous fields of dense trees; endless varieties of ripe fruits; rivers of pure water gushing through their meadows; gentle winds; abundant shade, and a disease-free environment.

“A woman would carry a basket on her head and would walk through the two gardens. By the time she leaves, the basket would have filled with different fruits without her needing to touch anything.”[3]

The fruits were so many and ripe that they could not wait to be picked. All that was required of the people of Saba was to enjoy these blessings whilst thanking Allāh, as their messengers said to them:

“Eat from the provisions of your Lord and be grateful to Him. You have a good land and a forgiving Lord.”

Could anyone wish for anything greater than this? A land willing to give and a Lord willing to forgive? But with time, the worship of Allāh was abandoned and replaced with the worship of the sun. Their messengers warned them but they refused. Allāh says:

“But they turned away, so We sent upon them the flood of the dam…”

Their gardens were flooded, their homes were flattened, their trees became few and thorny, and their sweet fruits turned bitter.

“… and We replaced their two gardens with gardens of bitter fruit, tamarisks and lote-trees here and there.”

“We repaid them with this because of their ingratitude, and do not repay except the ungrateful?”

After mentioning this, Allāh then relays to us yet another blessing that He had given them prior to the punishment, saying:

“And We placed between them and the cities which We had blessed many cities (i.e. al-Shām) that can easily be seen and We determined between them the distances of journey…”

Like everyone else, they would also travel for the sake of business, but their travel was altogether different. Their business routes from Yemen to al-Shām were marked with numerous cities along the way. They would thus find themselves during their journey leaving one city, resting within it, and then entering another over and over until they finally arrived at their destination. This meant that there was not even need for them to pack luggage with them due to sheer number of ‘service stations’ – “cities that can easily be seen”.

Navigation was not a problem either, for Allāh said “We determined between them the distances of journey”, thus they would never get lost as these cities along the way were of known distances from one another. Their business routes were not lonely and they did not have to pass stretches of empty land, rather their routes were populated with people and very well served.

As regards the safety of these business routes, Allāh said: “Travel between them by night or day in safety.” There was no fear on them both during the hours of the day and night. They only saw landscapes that were green, food that was ripe, drink that was fresh, air that was pure and routes that were entirely safe.

However, they became bored of Allāh’s favours, met blessings with disobedience and made one of the strangest Duʿā’ that a people could make against themselves, saying:

“‘Our Lord, lengthen the distance between our journeys,’ and they wronged themselves”

They wished to struggle like everyone else did. They wished to prepare luggage and experience the fatigue of life. Things were just too comfortable.

Do you find this request of theirs strange? It certainly is, but not uncommon. If you look around you, you will realise that some are doing the exact same. Allāh blesses a person with a beautiful and God-fearing spouse but they pursue relationships outside of marriage. Such is a person who has become tired of Allāh’s favour. Or another whom Allāh had blessed with a steady income from Halāl, but later in life, such a person chooses to set up a business of a Harām income. This person too is one who has become bored of Allāh’s favour. Such people await the exact same fate of the people of Saba. What was their fate? Allāh said:

“…so We made them into narrations…”

Allāh’s wrath introduced itself to them and thus Saba – that kingdom of heaven – was made into a mere tale of the past which people relate to one another.

“…and we dispersed them in total dispersion!”

What was once a gathered civilisation of unity was shattered into a fragmented, scattered and dispersed community of people.

In the conclusion of this story, Allāh reminds us that not everyone despaired for a change in their life; indeed there were those who continued upon what they were on, completely unaffected, saying:

“Indeed in that are signs for every patient and grateful one.”[4]

This is the fruit of the entire story. Those who are patient in their worship of Allāh, as well as those who continually show true gratitude to Allāh for what He has given them, are the ones whose hearts will shake after hearing such a story.

The story of Saba is a practical and real-life model of what happens to countries, communities or individuals who misuse Allāh’s blessings and fail to respond to advice. This is not the only model which the Qur’ān presents, for Allāh has informed us of identical stories to people who possessed many gardens, two gardens and one garden, all of which were taken away from their owners for the exact same reason.

As for the story of the one garden, this was mentioned in Sūrah al-Qalam, where Allāh says:

“Then a visitor from your Lord visited it at night and burnt it while they were asleep.”[5]

“His fruits were encircled with destruction.”[6]

As for the story of the many gardens, this was mentioned in Sūrah al-Shuʿarā in the description of Pharaoh’s punishment,

“So We expelled them from gardens and springs…”[7]

“The Qur’ān makes clear in many of its passages that Allāh does not destroy a person or cause him to suffer without sins.”[8]

The second: The only ones who will benefit from such stories are “the patient and grateful ones.”

Patience is of three levels:

Gratitude is likewise of three levels:

Should you tick these three boxes of gratitude, then congratulations, you have qualified yourself for an increase in all those good things that are dear to you, as Allāh has promised:

“And when your Lord proclaimed, ‘If you are grateful, I will surely increase you…”

Failing to do so however qualifies you for the second part of the āyah,

Sūrah Saba speaks of two communities both given abundant goodness. One was the family of Dāwūd and Sulaymān. How they met blessings with gratitude and patience is highlighted. Immediately after their story the people of Saba are made the focus; a community who were also given so much but did not show gratitude or patience.

One who fails to revisit his finances, doubtful investments or prohibited sources of income after learning of this story has not displayed patience and gratitude, and thus awaits the exact same fate as that of the people of Saba – “so We sent upon them the flood of the dam” – a law of Allāh that is fixed and does not differentiate between people.

One who fails to rethink his relationships, private conversations and prohibited usage of his limbs behind closed doors has not displayed patience and gratitude, and thus awaits the exact same fate as that of the people of Saba.

One who fails to genuinely make Allāh the greatest priority in life has not displayed patience and gratitude, and thus awaits the release of the dam, for a flood – whatever the form of that ‘flood’ may be – to tear apart these distractions until they are forced to cry, with a broken heart, retreating to the doorstep of Allāh.

Do not be like such a person. D o not be like he who waits for floods, the growth of tumours, the death of loved ones, the loss of savings or deterioration of health to repent and change. Show Allāh that you have learnt the lesson that He intended for you from the story of Saba, and in proof of this, promise Him to make it the beginning of a brand new page in your journey to Allāh and the Home of the Hereafter.

[1] Aḥmad, on the authority of Ibn ʿAbbās