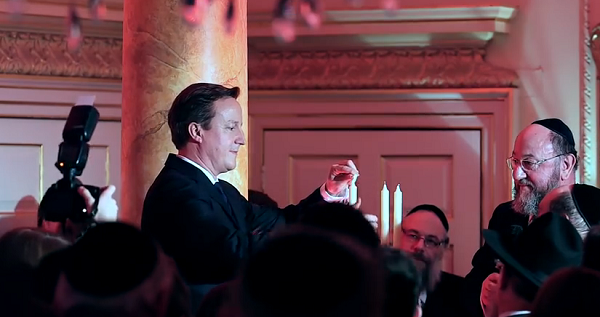 On 19 December 2014, the Prime Minister of Britain hosted a reception in Downing Street to mark the Jewish festival of Chanukah 2014.[1] [see video above]

It is one of the most stomach-churning speeches you will ever hear and reminiscent of William Gladstone’s views of Catholicism. Shortly after the end of his first term in office, Liberal leader William Gladstone penned a pamphlet against Catholicism. Denying it was even a spiritual faith, he argued that British Catholic followers could not be loyal to both the Crown and the Pope and said they sought to undermine traditional British values, hiding “crimes against liberty beneath a suffocating cloud of incense”. The polemic became a bestseller, shifting 150,000 copies within weeks. The streets of London were filled with impoverished Catholic immigrants, the women wearing headscarves, and fears rose over the impossibility of integration. The capital was used as a base for terror attacks that killed more people over the following 15 years than were killed in any terror attack at the start of this century.

Each wave of mass immigration provokes the same old fears before newcomers are subsumed into evolving nations. After Catholics it was the turn of Jews, accused of inhabiting a parallel society with a strange language, clothing and customs. Now it is the turn of Muslims. Debate over their place in modern Britain has been thrown into sharp relief in recent times mainly through the use of propaganda, an effective tool used in Nazi Germany. Propaganda is the art of persuading people to have a particular view about something. Propaganda is always biased. It is used by political leaders or organisations to deliberately mislead a population into believing a certain set of facts or beliefs to be true. Propaganda is used by most countries in times of war to encourage hatred towards the enemy and to promote nationalism (being in favour of one’s country) in the population.

Enter the British Prime Minister, David Cameron who stated the following in his recent speech:

“I am not an expert on all the different parts of Chanukah, but the one thing I do understand is in a way what you’re commemorating is the fact that way back in time, when Antiochus IV was trying to snuff out Jewish religion and culture, you said that was wrong and you stood up for having that culture and that time”.

Is it not such an irony that in Britain today, he and his neo-conservative hawks are playing the role of Antiochus IV in trying to subdue Islamic values and culture? Any Muslim who seeks to stand up to this is being branded as an extremist and terrorist.

He goes on to say:

Many have criticised Mr Cameron here for taking a dig and a jibe at the Muslim community. Earlier this year on 14 June 2014, Mr Cameron said: “It is time to stop being ‘squeamish about Britishness’ and tell everyone who lives here that refusing to accept British laws and the British way of life is ‘not an option’”.[2] He went on to pledge in that speech aimed at Muslims that Muslim clerics in the UK who inflame terrorism by denouncing free speech, equality and democracy will be opposed in a ‘muscular’ new defence of ‘British values’. Three years before that in 2011, Mr Cameron said that “Muslims must embrace our British values” and that “multiculturalism has failed”.[3]

“It’s a great credit to our country and to your community that there are so many successful Jewish schools in the private sector, but also in the state sector as well.”

This really is goading the Muslim community in a year where we have seen Muslims schools under the spotlight of one of the tools in the armoury of the neocons, OFTSED, with the Trojan Hoax scandal which resulted in a number of Muslim schools being disproportionately targeted whereas other faith schools were not inspected and/or treated in the same way.

Perhaps the worst of this ill-conceived speech was the following:

“Britain is a friend of Israel, a good, a candid, a trusted friend of Israel, and that is how, as long as I’m Prime Minister, it will always stay […] I know that it happened on the other side of the world, but I think the appalling events in Peshawar, where we saw 126 children murdered, I think is a reminder, whether we needed it, that there aren’t bad terrorists and less bad terrorists – there are terrorists.. And you know that in Israel more, perhaps, than any other country in the world. So let us be clear: there is no moral equivalence between an Israeli government that wants to defend its people and its territory against attack, and terrorists that want to kill as many people as they can with the weapons and the bombs and the missiles that they throw over Israel’s borders. And this country will always be a staunch friend of Israel.”

This really is sickening on many levels. Firstly, Mr Cameron is supposed to be speaking to British Jews, so there really is no reason for him to speak about Israel. In fact, to equate the generally peaceful Jewish faith with the racist, genocidal Zionist regime is, I image, very disturbing for the peaceful British Jew who is against Israeli crimes; it would be like equating the Muslim community with the so-called “Islamic State” in Iraq and Syria, whose bloodthirsty actions incidentally share an extremely uncanny resemblance to the early founders of the so-called “Jewish State” of Israel.

Secondly, to speak about the Peshawar Massacre is nothing other than exploiting the deaths and memories of those innocent children to justify the sickness he suffers from. How hypocritical to speak about the deaths of children when only months before, Israel mercilessly killed more than 2,000 people in Gaza, of which more than 70% were civilians and up to 315 children.[4] Not to mention the hundreds killed in years gone by and the hundreds who are imprisoned in Israeli jails. Only last month in November 2014, Amnesty International produced a Report which found that Israeli forces had brazenly flouted the laws of war by carrying out a series of attacks on civilian homes,[5] displaying callous indifference to the carnage caused and subsequent war crimes. A respectable organisation such as Amnesty reported this and yet Mr Cameron openly backs the Israeli crimes and is thereby complicit in the war crimes which were committed through his unjustified support of murder and genocide.

If truth be told, none of us should be too surprised by this recent statement from Mr Cameron. After all, this was a man for whom prominent members of the Jewish community played a major role in financing his bid for power.[6] This is also the man who, while speaking to a 500 strong group of Jewish lobbyists in London in 2007, declared, “I am a Zionist”. He went on to add, “I’m not just a good friend of Israel but I am, as you put it, good for Jews”.[7] In 2010, he spoke to the Movement for Reform Judaism where he described his learning of his Jewish ancestry as the “highlight” of his year.[8]

Stuart Littlewood, author of the book ‘Radio Free Palestine’ which tells the plight of the Palestinians under occupation, has stated that there are so many Jews at the top of Britain’s Conservative party David Cameron once quipped, that it should be known as the “Torah party” rather than the Tory party. He went on to further state that the Jewish community were statistically over-represented in the House of Commons eightfold. Incidentally, if the Muslim community were over-represented to the same extent, they would have 200 seats in the House of Commons – imagine the headlines we would get if that was the case; “Muslim takeover of Britain”.[9]

It is not democratic for a holder of high office to be put in place by the money of powerful political pressure groups. Nor is it democratic for one ethno-religious group to be greatly over-represented within the corridors of power.

Mr Cameron’s speech shows the contempt with which the Muslim community are held and the manner in which they are viewed. Being presented as weak, insignificant and valueless allow brazen statements like that of Mr Cameron to be made without anyone even raising an eyebrow. When views like this go unchecked, then we must understand that we are at a very dangerous point in history where hatred for Muslims has become so normalised to such an extent that a full scale attack on the Muslim community is arguably near.

Although it is clear that many of Mr Cameron’s fellow career politicians’ actions indicate a poisonous ideological hatred for some minorities, in particular Muslims, it can also be argued that they have no firm values, but pander to whatever and whomever will bring them power. It is therefore not all doom and gloom. As the British Muslim community grows and becomes more firmly implanted within the British landscape, and as we become increasingly aware of the eminence of Islamic values in contrast to the crumbling social fabric around us, it would be interesting to see what political power the Muslims of tomorrow will yield. When it comes to politicians that will sell every single ounce of their integrity and honesty like Cameron, who have isolated Britain along with the USA and Israel against the rest of the world vis-à-vis defending genocide and war crimes, who is to say that in the near future these politicians will not recognise the importance of the Muslim vote?

I will conclude with one last point on Mr Cameron’s love for the murderous Zionist state. If the interests of the Zionist regime and the powerful Zionist community were to conflict with those of the United Kingdom, we wonder: who would David-“I’m a Zionist” leader of the “Torah Party”-Cameron really represent?

Abdul-Rahman studied International History covering topics such as WW1, WW2, The Cold War and Civil Rights in America. He worked as a youth worker for a number of years assisting in the social, educational and physical development of young people and currently works in Recruitment. He takes a particular interest in the impact of domestic politics on the Muslim community.

Abdul-Rahman studied International History covering topics such as WW1, WW2, The Cold War and Civil Rights in America. He worked as a youth worker for a number of years assisting in the social, educational and physical development of young people and currently works in Recruitment. He takes a particular interest in the impact of domestic politics on the Muslim community.