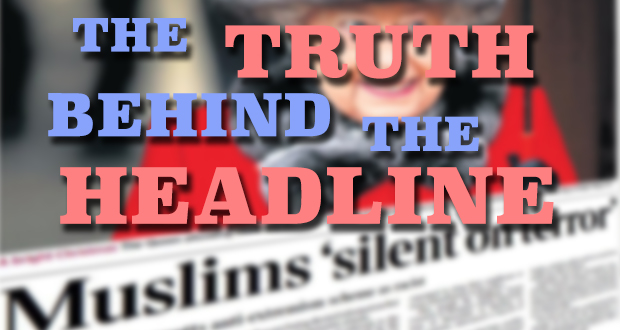 To break up the festive cheer on Boxing Day the Times published a front page article under a bold title: “Muslims ‘silent on terror’”.[1] It was repeated on their website with a standard picture of some Muslims wearing niqābs titled “Muslims ‘stay silent’ on extremism tip-off scheme”.[2]

The number of referrals made to Prevent from the community was repeatedly implied to be a clear sign that “Muslims are boycotting the country’s key anti-radicalisation programme” and that there was “concern that the police are being denied information that might prevent terrorist attacks”. 9/11 was mentioned twice and that the threat level in the UK was “Severe” meaning a Terrorist attack was “highly likely”. Then some quotes were given of Muslims voicing criticism of the Prevent policy, presumably to support what the data has now apparently proven: The Muslim community are refusing to report people who they suspect will take part in the “highly likely” terrorism.

The data that the Times article relied on was obtained by us from the National Police Chief’s Council (NPCC) and is so brief it can be reproduced here in full:

“3228 individuals were referred to the police for assessment on whether preventative action was required.

2180 referrals came from public bodies outside of policing, such as schools, social services and health (showing a high level of trust in Prevent policing from other sectors);

280 referrals came from the community, family, friends and faith leaders, demonstrating people feel confident in coming to the police with their concerns about someone they knew getting involved in extremism.”

As you can see no mention is made of any particular community and no breakdown of type of extremism is made. If figures for Channel referrals are anything to go by it is likely around half of the cases are not related to Muslims,[3] yet no other community was accused of inaction. But of course the most blatantly misrepresented was the clear statement that in the opinion of the NPCC the data proves that the community does in fact feel confident reporting to the police.

A spokesperson from the NPCC said the damning quote in the title, that Muslims were “staying silent”, certainly did not come from them and that the data clearly showed referrals were coming from the community.

The NPCC lead for Prevent, Chief Constable Simon Cole in a statement which accompanied the data release and was provided to the Times said that he was pleased that the Police were a trusted agency for reporting concerns and gave no indication that he held any negative view of the Muslim community in that regard:

“A legislative change was introduced in April 2015 which required public bodies to make referrals to the Prevent programme, and which led to a high number of referrals being recorded. At a time when the threat level is severe, it is encouraging that the police are highly trusted as an agency for reporting concerns about radicalisation. The figures may not accurately capture the nature of the original source because in many cases members of the community will report in the first instance to the police. For example, the numbers include referrals about domestic extremism and extreme right wing radicalisation. Currently one in ten of the referrals received come direct from communities, whilst referrals from outside of police and prisons form the majority of the other referrals received”[4]

It would be hard to imagine anyone with the intelligence to be a journalist for the Times not realising such an inflammatory headline and article would create further resentment or even hatred of the Muslim community, all too often falsely accused of not pulling their weight in the fight against terrorism. That it goes so completely against the data and the clearly stated beliefs of the Chief Constable points, in my opinion, not to negligence but intentional propagation of Islamophobia.

In a classic example of how misinformation can take on a life of its own the Times story was rehashed by other outlets and put out as a Press Association “Wire” which was widely reproduced, even in publications we normally expect to be more balanced.

Even the Muslim author of a broader piece in the Huffington Post titled “Why Are Muslims Boycotting Prevent?”[9] went unquestioningly with the Times presentation of the data and echoed the non-existent concern over “under reporting by Muslims”.

In many of the publications there appeared an additional claim of a “collapse in referrals” from the Muslim community. The data was produced by the NPCC so the spokesperson was able to state categorically that no similar breakdown of data has been produced for the previous period to enable a comparison. Meaning this claim can only be a blatant fabrication.

According to the NPCC none of the other outlets had bothered to contact them for the data.

The Daily Mail managed to publish two articles from the one in the Times with the comments section from one showing some of the effect on their readers.[11] Many assume that the Daily Mail has only a very specific Right Wing readership but the online version is often the first link in news aggregators such as Google News. Convenient, from a casual research perspective, is that there is even a means for reader comments to be rated by anyone without signing in, giving a reasonable indication of popular feeling.

A quick tally of the moderated 190 comments revealed the article incited 33 approximate calls for the UK to “wake up”, 30 that Muslims can’t be trusted, 27 that the story was no surprise, 20 that Muslims refuse to integrate, 14 calls to “Ban the burka” and various requests for Muslims to go back to their own country, to stop Muslim immigration, for Muslims to be interned in camps, for the closure of mosques, the banning of all religions, a comparison of Muslims to Nazis and 4 expressions of a willingness to give up their freedoms to be kept safe from the Muslims. I dread to think what the comments that did not pass moderation were like.

“They are not willing to integrate, the only changes they want are the ones that favour them. This country needs to wake up!!” 6917 green arrows to 171 red arrows or a 97.6% approval

“If they banned the burka Leicester would change overnight, and probably many other towns and cities in England.” 98.9% approval

“Trust has to be earned. Do not blame others if people distrust you, when you do not shown to be trustworthy.” 95.2% approval

All the comments that were negative to Muslims received 90+ percent approval and any that tried to be balanced, not necessarily overtly pro-Islam simply not anti, were given around the 10% approval mark

“How strange is this media reporting. What if the parents or family don’t know anything.” 12.6% approval

The data also appeared in a Mail on Sunday article about border security.[12] The figures were presented with no mention that they would have included a very significant number of non-Muslims, instead going with a picture of a Muslim pointing an AK-47 at the reader next to a worrying hockey stick graph of the “rocketing” and “dramatic increase” in number of referrals.

Due to a lack of opposition from Muslims it has reached the point where scaring people about the Muslim’s supposed inclination toward terrorism and lack of loyalty to Britain has become a mainstay of even supposedly high end journalism. Where the Jewish community has so successfully combated anti-Semitism by complaining and campaigning the Muslim community has just grown accustomed to turning the other cheek.

If you are fed up of being labelled as the “enemy within” make a complaint to the Independent Press Standards Organisation. Clause 1 of the Editors Code of Practice reads “The Press must take care not to publish inaccurate, misleading or distorted information”

As one Daily Mail commenter put it “while it is wrong for people to target individual Muslims, such as the girl spat at recently, these things will continue to occur if the Muslim community are seen as not wanting to condemn terrorists, and help us to identify and get rid of them.”

The regulator will only challenge this harmful and divisive journalism if you ask them to.