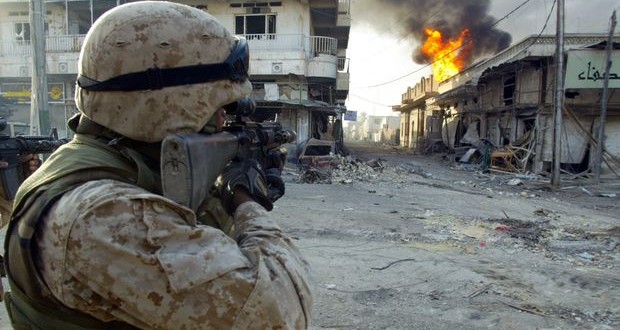 Fallujah, the Gaza of Iraq

Al Fallujah, Starving between a Rock and a Hard Place

In a desperate letter to UN Secretary General Ban Ki-moon, the ‘Arabic European Center of Human Rights and International Law’ reports that food and medicine in Iraq’s Fallujah has all but entirely depleted due to a strangling siege enforced by the Iraqi government and its militias. Families can only feed their children leaves from trees and shrubs. Many have turned to suicide, whilst others anticipate inevitable death by starvation in what has been classified as genocide.[1] Muslim Scholars from all over the world are exhorting all whom Allāh has given the capability to to help their families who are trapped under this oppressive siege.[2]

“Rain or do not rain, wherever you rain, Allāh will bring me your crops”[3] uttered the infamous and righteous Abbasid Khalīfah Harun al Rashid. He was addressing a passing cloud from the heart of Baghdad between 786-809AD, the once thriving, affluent shining capital of the world. It was an Islamic ‘Golden Era’; one that exported its universal values and civilisation. One that brought surrounding empires to the willing servitude of the Islamic State. It was the product of the exemplary Islamic Caliphate every Muslim aspires to. In an affront to this time, that same, yet contemporary, Iraq is shaped by a reckless invasion and pilfered by its debris. It suffers from a cultish and brutal regime which drew thousands of Shia mercenaries to carry out its atrocities in the province of Anbar and its surroundings. The Iraqi town of Fallujah is now the stage for one of the world’s most pitiless and overlooked sieges.

Branded a ‘National Mobilisation’, deployed against the self-declared ‘Islamic State of Iraq and Syria’, these Iranian-backed, proxy Shiite dominant militias, between 100,000 to 120,000 strong,[4] have turned Iraq from the Harun al Rashid Caliphate of yesterday to a spectacle of ethnic extermination. Between the rock of ISIS, decried by the US as its ‘biggest threat’,[5] and the hard place of these spiteful militias, to whom the US provides immaculate aerial support, swathes of Sunni residents suffer displacement, murder and starvation.[6] In what is painted as a war to retrieve western Iraqi provinces in Anbar, the single Sunni village of al-Askari had every home scorched by these mobs, whilst in Barwanah, as many as 70 Sunni civilians were killed in ‘execution-style’ murders.[7][8]

To give a wider perspective of the current situation, Anbar has been pounded by a multinational coalition with twice the force of that which obliterated Syria.[9] According to the UN Report on the Protection of Civilians in Armed Conflict in Iraq, at least 18,000 civilians were killed between the 1st of January 2014 to the 31st of October 2015, with almost 40,000 wounded. In around the same period, more than 3.2 million Iraqis were internally displaced, over a million of whom were children. Near all of those displaced originate from Anbar, Ninewa and Salah al-Din. The report outlines that Iraqi government forces and militias have perpetrated illegal killings, abductions and intentional targeting of civilian infrastructure. And while the latter has been dismissed as ‘reprisal’ attacks, the report admits “it has been impossible to identify the perpetrators of violations and abuses committed, largely within liberated areas under Government control”.[10]

According to Human Rights Watch, suicide-vest strapped members of Shia militias, incited by the ‘religious verdict’ of ‘Ayatollah’ Ali al-Sistani,[11] have “abducted and killed scores of Sunni residents […] and demolished Sunni homes, stores, and mosques”. US and coalition backed ‘Badr Brigades’ and the ‘League of the Righteous’ have mutilated Sunnis upon identification, with others abducting Sunnis for ransom, and torturing captives to draw confessions under duress.[12] All these gross violations and aggressions have not only been overshadowed by the west’s ‘militant’-manic smokescreen, but this ethnic extermination has been happily assisted. Peter Van Buren, on crimes of unhindered Shia militiamen in Sunni Diyala, remarks:

“Anywhere else in the world the U.S. would label this ethnic cleansing, and say it was a forerunner of genocide. It is, and likely will be, we just don’t want to call it that for PR purposes.“[13]

Amnesty International’s briefing is titled “Absolute Impunity: Militia Rule in Iraq”, and outlines ‘harrowing details’ of scores of handcuffed, ‘execution-style’ crimes being carried out by powerful Shia militias, sanctioned by Iraq’s sectarian, despotic regime.[14] Iraq’s Fallujah, which neighbours Baghdad, has born possibly the severest brunt of their handiwork. Locals in Fallujah have been subjected to a strangling siege which is starving its 100,000 citizens to death. Militias have encircled the city, cutting supply lines, preventing people from leaving and enjoying a US and Iraqi militiamen blitz that has killed more than 5000 civilians,[15] and obliterated Fallujah’s central hospital.[16][17] As Fallujah, dubbed the Gaza of Iraq,[18] entered into its second year under siege, residents pulled out the body of a desperate woman who threw herself, with her children tied to her waist, into the Euphrates River.8 Did we adopt the #thiswoman hash tag or do even know her name? Allāhul mustaʿān.

According to the Iraqi Fiqh Council of Senior Scholars:

And we remind everyone of the words of Allāh:

These concurrent events have resulted in where we are today, whereby crude reactionary groups have emerged, often reflecting the behaviour of these cultish and savage militias, who are responsible for the mass ethnic purging of Sunnis since 2003. If this holds true, how much better are its backers than the evil they claim to be thwarting? In fact, they are about the same or worse, as there is surely ‘no smoke without fire’. With this in mind, a Muslim is astute and intelligent. The Prophet (sall Allāhu ʿalayhi wa sallam) says:

“A believer is not bitten from the same hole twice.”[21]

Consider the following question that triggers the sirens of perspective as to where we are now in the world. Seeing that ‘ISIS’ is now treated as practically the central, largest problem in the world, with its ramifications and reactions affecting people directly, why is it that what is happening in Iraq, its birthplace, is blacked out? Although this article does not intend to suggest reasons, our outlook on the Middle-East should most certainly not be so monochromatic, or rendered on our behalf by the media as one of the Middle-East’s two main culprits.

The following question was asked in 2013,[22] and it remains pertinent still: What happened to the Iraqi revolutionary Spring that wanted the removal of the [still] sectarian Iraqi marionette-regime, the Sunni tribes, factions, and diverse opposition movements? Did it dissolve into the abyss, or is the US fast-feeding the world its view of the Middle-East? How are we so ‘enlightened’ about our rightful condemnation of the archetypical monstrous image of ‘ISIS’, yet think (or believe) that the majority of Iraqis are sympathetic towards it? Our perception of the world, if confined to a suburban shack, will always be limited to the street we see from the window, whereas the wider reality is very different. Allāh knows best.

May Allāh help our besieged and oppressed brethren in Iraq, and give them victory against the oppressors. I entice you to support them and remember them in your Duʿā’s.

[20] Verdict by the Republic of Iraq Fiqh Council of Senior Scholars to Call and Verdicts Headquarters, dated: 23/03/2016, number 55 regarding the catastrophe in al Fallujah

[21] Bukhari and Muslim on the authority of Abu Hurairah

Previous: Easter; a time to approach God directly
Next: My arrest – it could happen to you