From Watchdog to Lapdog: How Sections of Indian Media are Failing Democracy 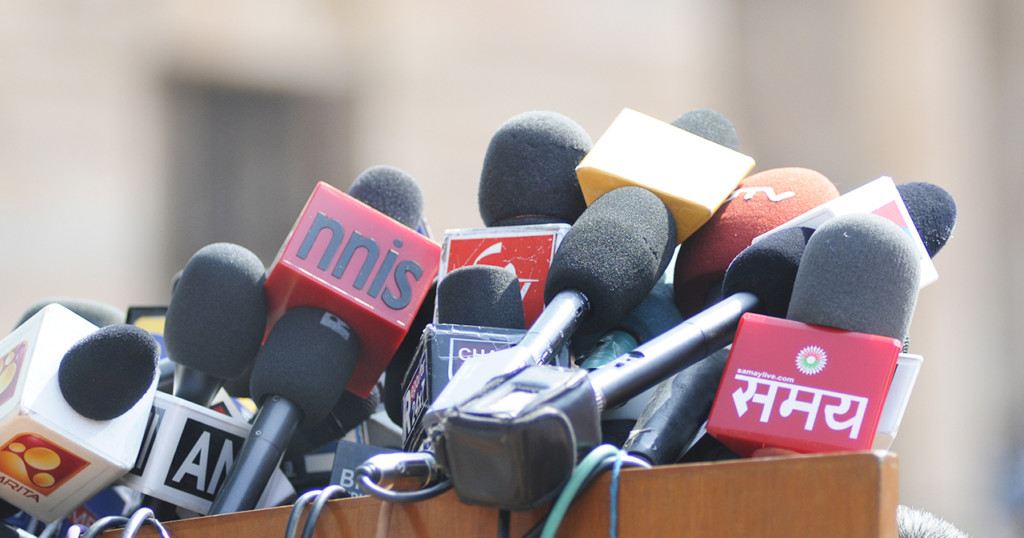 George Orwell, in his essay ‘the prevention of literature’, wrote, “Freedom of the press, if it means anything at all, means the freedom to criticize and oppose.” The press as an institution, within a democracy, maintains its significance and value only as long as it is afforded the freedom to criticise and oppose the people in power. It becomes the voice of the people amplified multiple times which may otherwise never be heard inside the corridors of power.

However, observing the discourse in Indian news channels, for the past four years since the coming to power of Prime Minister Narendra Modi, one cannot but feel apprehensive at the wilful subservience of certain news channels to the government. Over the course of these four years, the opportunities to hold the ruling disposition to account arose many times but the criticisms were few and far between.

Prime Minister Modi came to power on a sweeping majority, crossing the half-way mark needed to form the government without much sweat; owing largely to his campaign which promised development, increase in employment, a strong rupee, controlling inflation, strong foreign policy among others; as opposed to his opponents who had to deal with massive corruption scandals that broke out during their tenure in government. After being in power for ten years from 2004 to 2014, his opponents, the Congress Party and their alliance partners, also had to deal with a massive anti-incumbency factor. Such was the defeat of his opposition that India currently has no official Leader of the Opposition, as the opposition failed to secure the least requirement to be classed as an opposition i.e. 10% of the seats in parliament.

Given Mr. Modi’s background as a Hindu nationalist, whose rise to power stoked fears within the minorities; and an almost non-existent opposition in parliament, the media should have taken this to be their moment on the grand stage of India’s democracy. But alas, the performance left much to be desired and in certain cases left its viewers – at least some if not all – repulsed and disgusted.

Not all media channels have been guilty of this failure but the ones with the highest viewership certainly have been. Take the example of India’s top two English news channels in terms of viewership[1]: Republic TV & Times Now.

Republic TV was launched in 6th May 2017 by its founders who include Rajeev Chandrasekhar, a member of parliament belonging to the ruling party, the BJP and Arnab Goswami, their lead anchor. While the launch was only in May 2017, Arnab Goswami’s style of journalism, when he was lead anchor for Times Now before his resignation in 2016, came under heavy criticism. Outlook magazine, in early 2015, ran a cover story about Goswami, titled, “The Man Who Killed TV News”, while adding in the same report, “Arnab plays judge, the audience the jury.” For Goswami, calling guests who disagreed with him “a coward, lunatic, worm, terrorist, anti-national”[2][3] and other such abuses on live TV are as commonplace as one’s morning coffee.

The bad quickly turned to worse when he started Republic TV. Journalism had already become entertainment, but now, it was to become an unofficial voice of the Narendra Modi government. Criticism of the ruling disposition greatly diminished, while criticism of the non-existent opposition soared.

Using twitter hashtags, Arnab tries to get his audience involved with the topic under discussion, and these hashtags are often very critical of the opposition, while praising the government. Altnews, a website which exposes fake news, in their review of the channel after a month of its launch, published a table of the hashtags used and it became clear where Arnab’s loyalty lay. Below is an excerpt from Altnews reproduced as it was published on their website.

Goswami’s former home, Times Now, where this style of journalism was fostered and grew under Goswami himself, also continues in the same vein even after his departure. The criticism of the government disappeared while primetime slots remained for criticising the opposition over issues of non-relevance. In one instance, it ran a prime-time story critical of Rahul Gandhi, over his choice to watch a movie a few hours after his party’s defeat in a state election.[4] In another case, it ran another prime-time story over a 7-year old photoshopped image circulating on social media.[5]

Hindi news channels don’t fare any better than their English counterparts either. Case in point being when the new 2000-rupee note was issued by the government, post demonetization, Hindi news channels like Aaj Tak and Zee news claimed that the new notes had a fictional “Nano GPS chip” based on rumours that were spreading on social media.[6] This was an attempt to bolster the image of the government in the eyes of the public as being advanced and innovative.

This luxury of a favourable press was one which the previous dispensation didn’t have and rightly so. During their tenure, the media played its role as a watchdog to perfection. Important issues were raised, their proposed development programmes were scrutinised and their flaws exposed. Under Modi, however many of the channels started dancing to the tunes set by the government. Initiatives and programmes under the Modi government were cheered and continue to be cheered by the very same media.

When the decision of demonetization was taken, the former Prime Minister, Manmohan Singh, an economist himself, termed it “organised loot and legalised plunder” and predicted a drop in India’s GDP by at least 2%.[7] The drop in India’s GDP occurred as predicted;[8] around 100 people lost their lives[9] due to exhaustion by standing in serpentine queues outside banks to exchange their old currency for new notes, and what made this whole exercise futile, was a recent report by the Reserve Bank of India which said that more than 99% of the banned notes had returned to the banking system.[10] This failure of monumental proportions should have ideally given rise to the sharpest criticism from these media channels but instead this was hailed as a “game changing”, “courageous move” by none other than Arnab Goswami and after the showering of praise on Mr. Modi came the criticism of the opposition, “Why didn’t previous governments think of such a move?”[11] While, on what may seem like a totally different planet, Forbes magazine termed the decision of demonetization as “sickening and immoral”.[12]

The reasons behind the madness: greed, intimidation & demand

Arnab Goswami and the others who follow the same modus operandi as him in broadcasting news have one primary and obvious objective behind all the madness that they have introduced into Indian media in recent times viz., TRP’s or television rating points. The logic is simple: higher TRP’s mean higher revenue from advertising.

And to increase the TRP’s, they decided to shock the system, whereby the anchor plays the role of the judge, audience and jury; where the anchor unabashedly chooses a side in a debate; where the anchor repeatedly berates and abuses those guests who disagree with him; where guests who display a ‘facts-be-damned’ attitude take highest priority over others. And shock they did. For these channels, as per BARC (Broadcast Audience Research Council), have some of the highest ratings among English and Hindi news channels, even surpassing those who have been on air for a much longer time period. It is this greed, which a former minister of the BJP (1999-2004) and now a Modi critic, Arun Shourie, described as, “A dog with a bone in its mouth can’t bark.”[13]

While this greed is perhaps the most important contributing factor for this self-imposed censorship, there have also been cases of intimidation which have left an adverse effect even with those who wish to oppose the government. The methods of intimidation vary from ordering “tax-raids” against those media organisations which are critical of the government to turning a blind eye against hyper-nationalistic trolls, followed by none other than the Prime Minister himself on twitter, who regularly issue rape and death threats against journalists who are critical of the Government.[14]

Sagarika Ghose, a senior journalist, said regarding the backlash she regularly receives upon criticism of the government, “The minute I write something, I get droves of hate mail. I have had death threats and gang rape threats on social media and also through letters sent to my home. They know where I live.”

When Gauri Lankesh, a journalist who was often critical of the government was killed at her residence, a man who was followed by the PM, wrote on Twitter, “A bitch died a dog’s death and all of her litter is crying in the same voice.”[15] One year on, several arrests have been made of men associated with right-wing groups for the murder.[16]

Apart from the greed and intimidation there is another reason for this problem within the Indian media viz., the demand. As in any free market society the demand drives the supply. And these media channels simply deliver what the people wish to see. Of all the problems causing this malaise in the media this may be the easiest to cure. While, in a democracy, these channels can most certainly have a table for their madness, it’s the audience that needs to ask itself if it needs to dine with them at that very table?

This rather unholy relationship between the media and the government and the dangers that it entails to a democracy, led even the usually soft-spoken former Vice-President of India, Hamid Ansari, to remark in one of his speeches “In this age of ‘post-truth’ and ‘alternative facts’ where ‘advertorials’ and ‘response features’ edge out editorials, we would do well to recall Nehru’s vision of the press playing its role as a watchdog in a democracy.”[18]

With the next general elections slated for 2019 less than a year away, Nehru’s vision of the press being a watchdog in a democracy is in danger of being completely forgotten. The transition from a watchdog to a lapdog may not be complete but it definitely is on course.