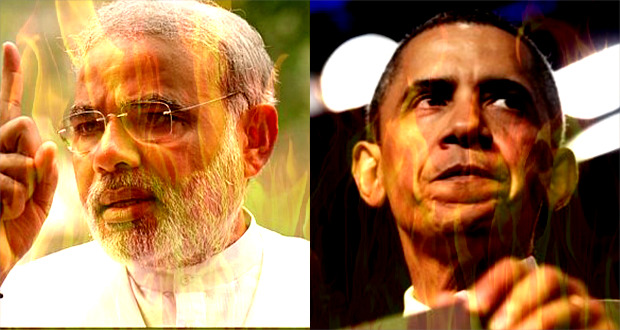 According to a statement issued by the U.S. State Department on May 16th 2014, the United States has welcomed the success of the new Indian Prime Minister Narendra Modi, stating that U.S President Barack Obama will work to establish close communication with him when he composes his government and assumes the responsibilities of his office.[1] The US will work with the formed parliament and strengthen bilateral relations between the two countries.[2]

Recently CNN concluded its news report on the new Indian Prime Minister Narendra Modi, describing him as “anti-Muslim”[3] being the leader of one of the most malicious Hindu extremist groups. In the seventies Modi emerged as a supporter of the ‘Rashtriya Swayamsevak Sangh’ or RSS, a right wing Hindu social movement.[4] In 1988, the RSS party transferred Modi to the ‘Bharatiya Janata Party’ or BJP and Modi assumed Secretary-General of BJP in the city of Gujarat. In 2001 Modi was elected as Chief Minister of Gujarat.[5] Riots broke out in the following year between Hindus and Muslims in the city, claiming the lives of over a thousand people, most of whom were Muslims. Modi was severely criticised and accused of neglecting his duty of halting the riots. However, following an investigation in 2013, the High Court of Justice declared him innocent of all charges.

French newspaper ‘Le Nouvel Observateur’ is seldom considered partial in favour of Islam or Muslims. Nonetheless, following an on-the-ground investigation it documented Modi’s crimes (‘the Ascension of Terrible Modi’).[6] Regrettably, some in the West—as we can expect—only pay heed to reports that suit their whims and more than often fail to recognise accounts that do not serve their hostility towards Islam and Muslims. While he may have shed crocodile tears over the riots, Modi refuses to utter a single word of apology for the brutality that transpired, while meanwhile commentators confirm that “Modi represents death to Muslims.”

Narendra Modi is the very same terrorist who led the Hinadak gangs’ destruction of the historic Babri Mosque in the city of Ayodhya in 1992, constructing a Hindu temple on its ruins.[7]

The twisted irony is that a man with such a disgraceful record is being welcomed so eagerly by the biggest peddles of ‘democracy’ in the world. This is in spite of the fact that Modi was actually barred from entering the United States from 2005-2014 (until now) due to the charges held against him for his crimes and atrocities against the Muslims of his own nation; crimes which CNN and most major Western media outlets have argued were sanctioned by the state as Muslims were turned into refugees in their own homes.

The West’s position has turned on its head, with Obama extending an invitation to this criminal to visit the US even before he officially took office, instructing his ambassador to India to congratulate Modi immediately after the results were announced.

Strangely enough people celebrate the victory of a man who possesses the ‘necessary qualifications’ of hatred against Islam and the killing of its followers, despite being labelled a ‘Blood Merchant’ by India’s National Congress Party (the secularist party led by Gandhi’s family) over ten years ago.[8] Ultimately the wicked world order regards the blood of Muslims to be worthless.

And from the impudence of this ‘elected’ murderer, is that when asked about the 2013 massacre he supported during his presidential campaign—a massacre that claimed the lives of over 2000 Muslims and displaced tens of thousands of others from Ahmedabad—he expressed that his sadness is similar to a back-seat passenger whose ride runs over a puppy![9]

If this is his abhorrent position regarding around 15% of India’s citizens (about 200 million Muslims), the grievances of the oppressed Muslims in India continuously fall upon deaf ears. Since his repugnant crimes were allowed unquestioned under his headship over one city, how will his racialist and hateful politics manifest now that he is the Prime Minister of India? All the while Obama shows his humiliating eagerness to meet him.