Indonesia takes a leaf from the US Terror Playbook 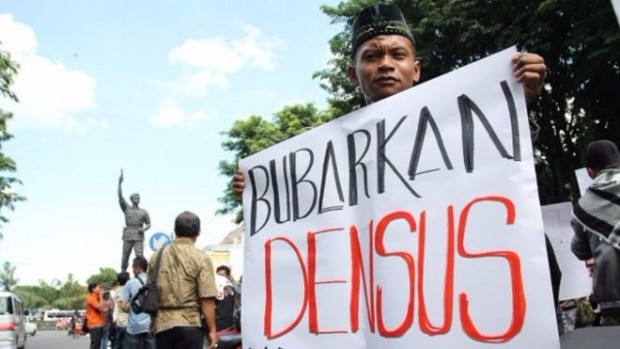 Indonesia’s anti-terror police squad Densus 88 is once again attracting significant public attention. The government’s efforts to counter the threats of terrorism are once more faced with criticism. The cause is the death of Siyono (34 years) in Klaten, Central Java last Friday.[1] The ‘accused terrorist’ died after being picked up from his residence by Densus 88.

The day after capturing Siyono, the squad searched his parents’ house, located next to a kindergarten, during school hours.[2] It was reported that the children were hysterical over the actions of Densus 88 members.[3]

In the past, it has been difficult to find justification for the work of Densus 88 especially when it comes to ‘alleged’ terrorism cases. In fact, the word ‘alleged’ is a problem in itself. This is because to take penal action against an ‘alleged’ crime cannot be found in references of Indonesian Law such as the Undang-Undang Hukum Pidana (Penal Code) and Kitab Undang-Undang Hukum Acara Pidana (the Code of Criminal Procedure).

Police immediately declared that Siyono died from exhaustion during a fight with a member of Densus 88 – information that of course needs to be clarified independently.[4]

Regardless of the cause of Siyono’s death, it is evident that the government in Jakarta needs to evaluate the fight against terrorism in the country. There is an absolute need to supervise Densus 88 so that it does not use its power abusively. Moreover, Indonesia is a country of law. Law should be the highest single assessor for all actions of its citizens and Densus 88 should not be exempt from this. The squad should not usurp the legal position in terrorism cases even though we all agree that terrorism should not have a place in the country.

If anyone is guilty of violating the laws, he or she must be punished according to the laws in force. The process of verdict should also be justified through legal justice. We certainly do not want this country to preserve, let alone legalise, vigilantism for crimes done by other people.

Ronald Dworkin, an American legal philosopher, has repeatedly criticised the detention of innocent individuals without trial in Guantanamo Bay during the Bush tenure.[5] It cannot be denied that Guantanamo is the most horrific prison to exist, after Alcatraz. There, the detainees encounter different forms of torture and sexual abuse, and they are often chained without food and water. In fact, the torture leads to brain injury and permanent disability. Many have committed suicide as a result of their suffering.

Dworkin expresses deep concern that the American criminal justice system that was built hundreds of years ago has all but collapsed as a result of the brutality of “retaliation” against terrorism. He firmly believes that Guantanamo Bay Prison is not only a denial of the American Constitution and the Geneva Conference, but also a betrayal of democracy and American liberalism. In fact, he asserts that it is an immoral and illegitimate act.
His criticism and anxiety are equally as relevant to the actions of Densus 88 in Indonesia. We must be cautioned that Indonesia is not trapped by cowboy law when it comes to combating terrorism. It goes without saying that we despise and condemn terrorism whatever the motivations and methods that are used by the perpetrators. However, ours should not be a blind anger as this results in state institutions abandoning humanity in order to combat terrorism. Fighting wanton terror with wanton terror will not result in any solution.

The fight against terrorism should not mean the abandonment of the fundamental right of all citizens to live. According to the National Human Rights Commission report, from 2000 to 2013, there were 83 suspected terrorists shot dead by Densus 88, with thousands more unfairly arrested (National Human Rights Commission, 2013).[6] Data taken from the Community of Islamic ideological Analyst (CIIA) paints a picture that is bleaker still. In 2013, at least 700 people in captivity became victims of state power just because they were suspected to have links to terrorism,[7] and a total of 90 people were killed outside the judicial process.[8]

These cases clearly demonstrate how the phenomenon of Guantanamo is moving closer to Indonesia. Washington fell into the wrong puddle in their move to eradicate terrorism. Indonesia should be wary of falling into this same trap.

We, of course, condemn terrorism in its every form. However, the manner in which suspected terrorists or those on suspicion of having links with terrorism are handled begs attention. Any person arrested must not lose their legal and humanitarian rights as is reflected in Suyono’s case. The Prophet (sall Allāhu ʿalayhi wa sallam) is reported to have said in a ḥadīth,

“Repel the punishment with doubt (it is better to err in forgiveness than to err in punishment).”[9]

This is taken as a maxim in Islamic Jurisprudence (Fiqh). The Saḥāba (raḍiy Allāhu ʿanhum) would fear inflicting unjust punishment upon their subjects. Such that in a narration the second Caliph ‘Umar (raḍiy Allāhu ʿanhu) reportedly said when acting in his capacity as judge,